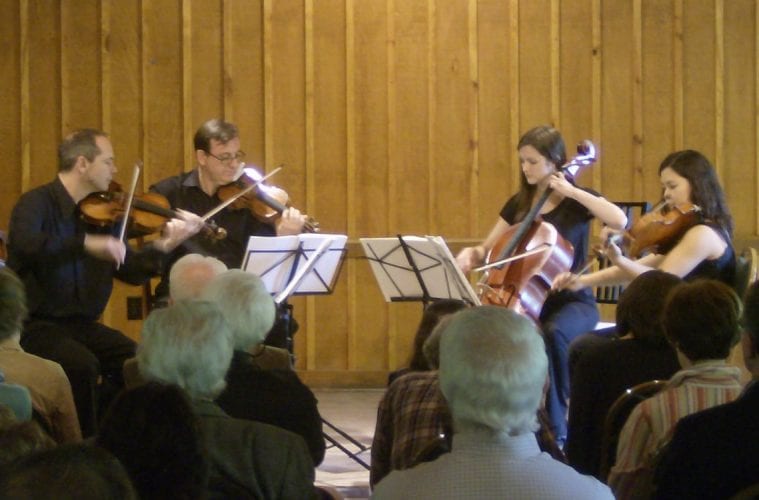 The Peachtree String Quartet concluded its season with a pair of identical performances at two intown venues, featuring music by Charles Ives and Ludwig van Beethoven. The first took place Thursday in Peachtree Presbyterian Church’s Kellett Chapel, and the second was Sunday at the Garden Hills Recreation Center.

The quartet — violinists Christopher Pulgram and John Meisner, violist Yang-yoon Kim and cellist Jennifer Humphreys — had already played the Ives-Beethoven program at the annual spring benefit concert for the Korean-American Scholarship Foundation on April 14 in Duluth. But last week’s concerts were the quartet’s own productions, promoted together and scheduled three days apart at two very different venues a mere two miles apart.

The Ives piece was a youthful composition, completed while he was studying composition at Yale University under the hobnail thumb of Horatio Parker. Subtitled “From the Salvation Army,” it incorporated elements from many hymn tunes familiar to Ives, who was also a church organist at the time. The Beethoven work was the composer’s last complete string quartet, from the last years of his “third period,” when his writing had become exceptionally personal in depth of expression. Both works received their premieres posthumously.

Each work was preceded by a brief talk from Ken Meltzer, program annotator for the Atlanta Symphony Orchestra, with brief demonstrations by the quartet. While I tend to be a “less talk, more music” kind of listener, the Peachtree String Quartet’s season has been one of repertoire favorites, and it was thought that these less familiar works needed a little audience-friendly explication.

It’s not the first time the quartet has repeated a program. Its January 20 concert at the recreation center, of music by Haydn, Beethoven and Frank Bridge, was repeated March 3 at Avath Achim Synagogue — again, venues only two miles apart, within the same demographic market.

There is logic in performing a group of works more than once in different venues. It gives a fairly new group such as the Peachtree, whose members are all rank-and-file players in the ASO, a better chance to develop their solidarity and musical identity as an ensemble while learning how they respond to different available venues as a quartet. They might also reach more audience, while also running a risk of splitting their core following given that the venues are so close together.

In the case of last week’s pair of concerts, the Sunday performance at Garden Hills was the hands-down winner. The Thursday night event in the more formal sacred space of Kellett Chapel had only a smattering of audience, while the Sunday afternoon concert at the informal, secular Garden Hills was essentially full and included a handful of the quartet’s ASO colleagues.

The difference in sound was also notable. The more sharply reflective acoustics of the elegant Kellett space, emphasized by the smallness of the audience, made it more difficult to understand what Meltzer was saying and gave the music a bright sound that had an occasional “ping” to it. The overwhelmingly wooden surfaces at Garden Hills, especially the rough-textured walls, delivered a warmer and more immediate sound. The feeling was one of the audience being closer to the music, with less of a “fourth wall” between it and the musicians. Meltzer’s talk in this space was clearly heard and understood, even in the back row.

Thus the performance at Garden Hills sounded livelier, more immediate and engaging — a fresher breath of air. The players hit their groove with the Ives, from its opening fugal movement onward, and kept it energized and alive through the end of the Beethoven. And for all the seriousness of both of these works, the quartet brought out the intimate and playful aspects in each — something which, for all the more frequently emphasized curmudgeonly elements of their personalities, both composers possessed aplenty.