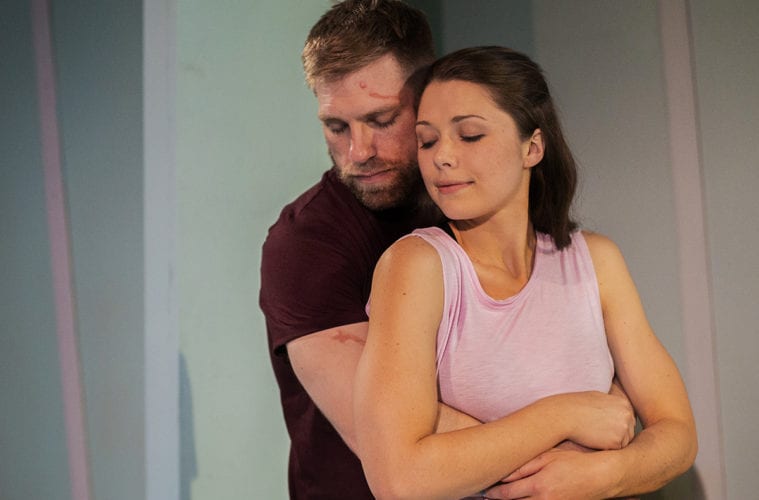 Joe Sykes and Rebeca Robles in "The Hero's Wife," a world premiere at Synchronicity Theatre. (Photos by Jerry Siegel)

Surviving a battle requires strength, dedication, patience and courage. Battles are rarely fought alone, and in The Hero’s Wife, these traits describe retired Navy SEAL and his wife, who are fighting wars at home and abroad. The world premiere drama, onstage at Synchronicity Theatre through May 5, explores the complicated and painful effects of PTSD post-deployment in 2019.

Theatergoers should come prepared to take a deeply personal look inside the walls of a home set on edge by nightmares and fear. Playwright Aline Lathrop shows the resilience and heartbreak of two young adults attempting to be their bravest selves for each other.

Synchronicity, which calls itself “smart, gutsy, and bold,” aligns with Lathrop’s vision. Quality of life and the mental health of retired service members is an issue she was unfamiliar with before writing the drama. But, as she noticed its effects on the homes and social lives of young veterans, she decided to dig in more. Joe Sykes and Rebeca Robles play a young married couple alternately passionate and ill-at-ease with one another.

Lathrop is gutsy in the way she writes the physical violence onstage. Cameron has night terrors, and Karyssa feels the effects, unbeknownst to her sleeping husband. The physicality of the horrors she endures radiates through the space. Robles and Sykes perfect the intensity of these moments. Though it’s hard to watch, it’s important to see.

Robles mixes eagerness and reservation in her physicality, conveying Karyssa’s unwillingness to quit on the situation. The closeness she desires is continuously thwarted, so she uses distance to enforce changed behavior. Sykes’ powerful physical presence is softened by Cameron’s desire to leave behind the roughness of his military career. The intimacy of the space and the set design’s romantic atmosphere complement the actors’ chemistry. This play leaves no room for awkward or disingenuous connections; Robles and Sykes deliver authenticity.

The script is bold in its extrapolation of what goes on behind closed doors at a veteran’s home. That’s not to say that this story is representative of all veteran experiences, but it is reflective of many experiences, validating the silent battles that rattle their homes.

As “The Hero’s Wife” progresses, the thought of harm coming to either character becomes a major concern. The actors deliver the intensity and authenticity needed to remind the audience that there are heroes among us.