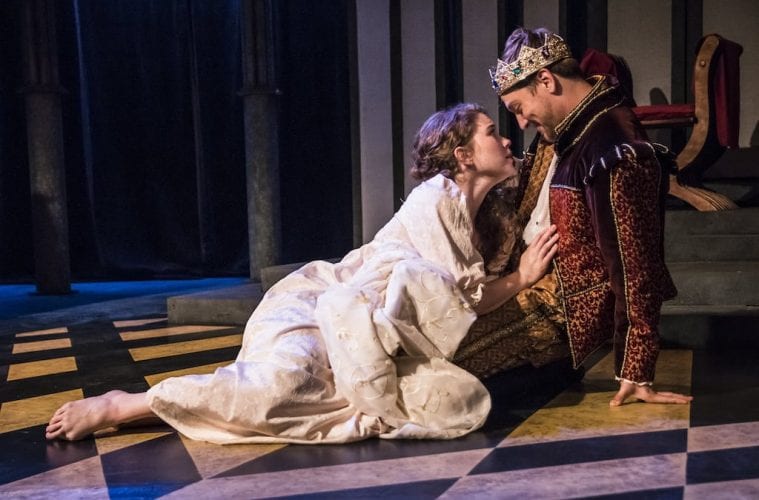 Review: Synchronicity’s “Anne Boleyn” serves up the Queen’s head on a witty and smart platter

Even if the only thing you know about Anne Boleyn is the fact that she lost her head, you won’t have trouble following the fast-paced and absorbing costume drama Anne Boleyn (currently running at Synchronicity Theatre through October 16). The show casts a sympathetic light on the somewhat mysterious and often-maligned second wife of Henry VIII by giving the historical figure a vividly dramatic life.

The character Anne Boleyn isn’t hard to identify when she first walks onto the stage. In the play’s opening scene, the young actress playing her, Brooke Owens, enters holding a head in a bag. Speaking directly to the audience, she asks if we’d like to see it, and there’s no question what this “it” might be. From there, we move back in time, and the story unfolds of how “it” moved from Anne’s shoulders and into the bag. In Act I we get the rise of Anne as she marshals and manipulates the political, cultural and religious forces of her day to become Queen, and in Act II we get her fall, as the same forces close in around her.

Howard Brenton is a fantastic playwright, able to inject suspense, personality, sex and intrigue into historical events and people. The Protestant Reformation in England, a royal divorce, the creation of the King James Bible and so on may not sound especially engrossing, but Brenton infuses each scene with energy such that the narrative has an admirable fleetness in all its developments, like a good thriller.

Director Richard Garner, formerly artistic director of the Georgia Shakespeare Festival, keeps the pace appropriately quick and smart, and he utilizes a small cast of 10 well; all the actors except Owens perform multiple roles. Brian Hatch makes a fantastic, lusty and obsessive Henry VIII, performing also as a young, pleasure-focused, plain-spoken James I, who becomes fascinated with the myth of Anne Boleyn in a different way many years after her death.

The play was commissioned for the Globe Theatre in London, and some aspects of the show were clearly designed to be performed in that sort of outdoor, circus-like theatrical space. There’s a minimal amount of scenery or elaborate props (settings, as in Shakespeare, are usually revealed by the actors or the action) and the script relies on a small but mighty ensemble to bring the grand sweep of history to the stage. These transfer fine to an intimate indoor proscenium environment, but other elements — such as frequent asides in which the actors directly address the audience — make a less smooth transition.

Also, most of the action of the play unfolds in London, and there’s a crucial related resonance that I think is missing on this side of the pond. At the end of the play, Boleyn addresses the audience, and it’s clear she imagines them as the very distant descendants and inheritors of her Britain. Part of Brenton’s mission here is to complicate the figure of Anne Boleyn for modern Britons, to rescue her from long-standing notoriety and even historical condemnation. For American audiences, there simply isn’t a mythos or shared historical perception about Anne Boleyn the way there is in Britain, so some of this central thrust of the play is lost mid-Atlantic.

I also wondered if Owens might be too young for the role. Even in the early scenes, her character has a sense of self-knowledge, preternatural maturity and savviness that Owens performs adequately onstage, but would run deeper in an actress in her thirties and would become more fitting as the character ages a few years, births children and becomes Queen of England.

Still, it little matters when the play itself is so much fun and brings history alive with so much wit and energy. Anne Boleyn is easily one of the best and smartest things onstage in Atlanta now and one of the first “must-see” shows of the new season.