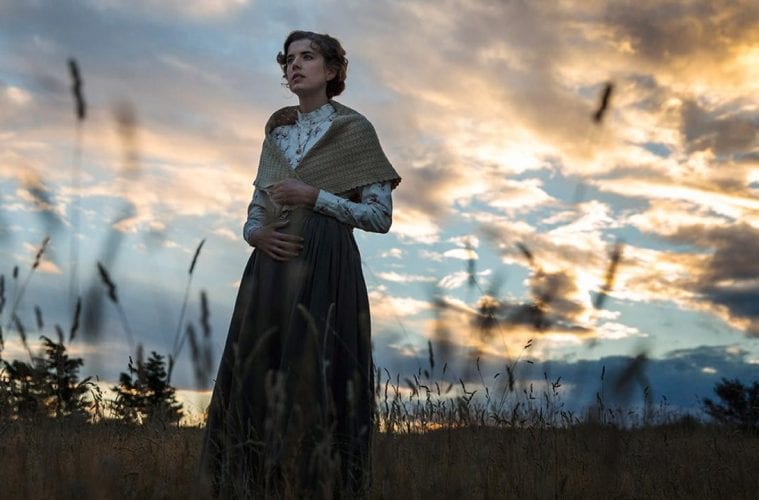 Sunset Song plays like a feature-length tourist-board ad that celebrates the sun-kissed glories of the Scottish landscape. Yet if you’ve spent any time in the real, windy, rain-scrubbed Highlands, you won’t be surprised to learn that many of the movie’s idyllic outdoor scenes were actually shot in New Zealand. That feels a little like cheating for a film that purports to dramatize the realistic, hardscrabble reality of farm life in early 20th-century Scotland.

Based on the first volume of Scottish author Lewis Grassic Gibbon’s A Scots Quair  trilogy (no, I hadn’t heard of it, either), Song focuses on Chris (model-turned-actor Agyness Deyn), the eldest daughter in a family of four children. Their farmer father John (Peter Mullan, in one of his patented salt-of-the-earth/bad-dad performances) loves his kids, but disciplines them with vicious whippings. In the bedroom, he pays no mind to his long-suffering wife, who’s tired of being a baby factory. Things don’t end well.

Dreaming of being a teacher, Chris instead finds herself running the farm all alone. That is, until she gets courted by a local boy, Ewan (Kevin Guthrie), resulting in a marriage of two people we can believe are equals, and equally in love. Then World War I breaks out, and Ewan crumbles under the scorn of villagers who murmur that he’s a coward for not enlisting. Bad times ensue, including an early depiction of PTSD and severe marital discord. The problem is, I just found I wasn’t especially interested in what happened to Chris and Ewan — an indifference that stretched across the movie’s long running time.

The earnest, but overpraised Terence Davies (The Deep Blue Sea, The Long Day Closes) is the director. Sunset Song suffers from some of the things that made me tepid on his other films. When people say a movie is made the old-fashioned way, that’s not always a compliment. Sunset is pretty, but a slog — languorous and uninflected in its pacing.

Part of the problem stems from Deyn’s portrayal of Chris. I think Chris is meant to be a headstrong, smart, wild beauty. Deyn’s performance is competent but not a lot more. In quiet scenes she can seem blank. And her big emotional moments smack of acting class. Still, Sunset Song might appeal to lovers of pastoral storytelling. And of Scotland — or New Zealand, anyway.

Looking ahead: next week, on June 10, comes the latest from French director Jacques Audiard (A Prophet, The Beat That My Heart Skipped, Rust and Bone). Winner of the Palme d’Or at last year’s Cannes Film Festival, Dheepan is a good example of an admirable director getting medalled for the wrong film.

The movie means well. It follows the struggle of former Tamil soldier Dheepan (Jesuthasan Antonythasan) to build a new life after the failure of the civil war against the Sri Lankan army. He does so by necessary deceit. Enlisting two strangers also desperate to leave Sri Lanka — a young woman named Yalini (Kalieaswari Srinivasan) and the orphan girl Illayaal (Claudine Vinasithamby) — Dheepan coaches them to pose as his wife and daughter. As a fictional family, they gain entry as immigrants to France. But not Paris. No, they wind up in suburban Le Pré-Saint-Gervais, where the main industry seems to be the illicit drug business based in the ramshackle housing complex where Dheepan gets a job as a custodian. 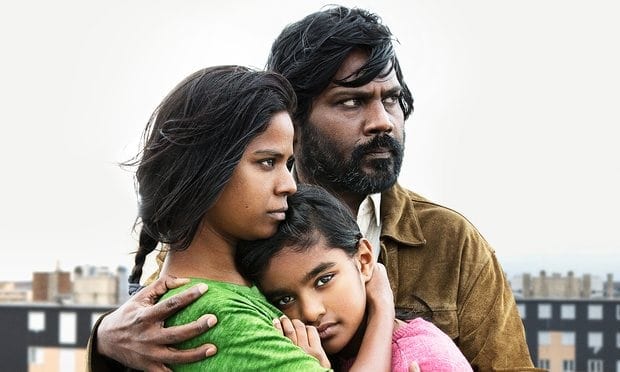 Dheepan is betrayed by the film’s sudden turn at the end.

Yalini, meantime, gets work as a cook to a handsome young drug kingpin named Brahim (Vincent Rottiers). We wonder if Yalini’s attraction to this bad boy might derail Dheepan’s masquerade. It’s no surprise, though, when she, Dheepan and Illayaal gradually start to embrace the familial roles they initially are faking. What is a surprise, not a good one, is when the movie becomes a noisy, bang-bang action thriller in its last act, with Dheepan going all Charles Bronson on the drug gangs.

A lot of critics responded to the movie’s Cannes win with a collective, surprised “Whaaaaa?” (Strong films competing for the Palme d’Or last year included Son of Saul and Carol.) The brutal challenges of the immigrant experience currently roiling Europe make Dheepan a timely film. But it can be confusing and frustrating to watch. Too often it feels more like a well-meaning thesis than a fully embodied drama.

Also opening on June 10 is Maggie’s Plan. I haven’t seen it, but advance buzz is good. It’s the latest from writer-director Rebecca Miller (Personal Velocity, The Ballad of Jack and Rose), daughter of Arthur Miller and wife of Daniel Day-Lewis. Greta Gerwig stars as Maggie, who gets involved with Ethan Hawke’s would-be novelist, who’s married to a brilliant Columbia professor (Julianne Moore). Complications ensue.