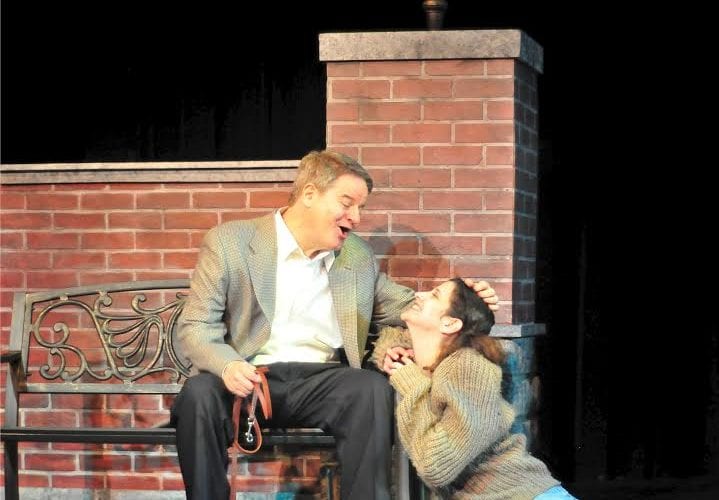 Review: The Stage Door Players’ “Sylvia” is dated; finds balance through its moments of humor 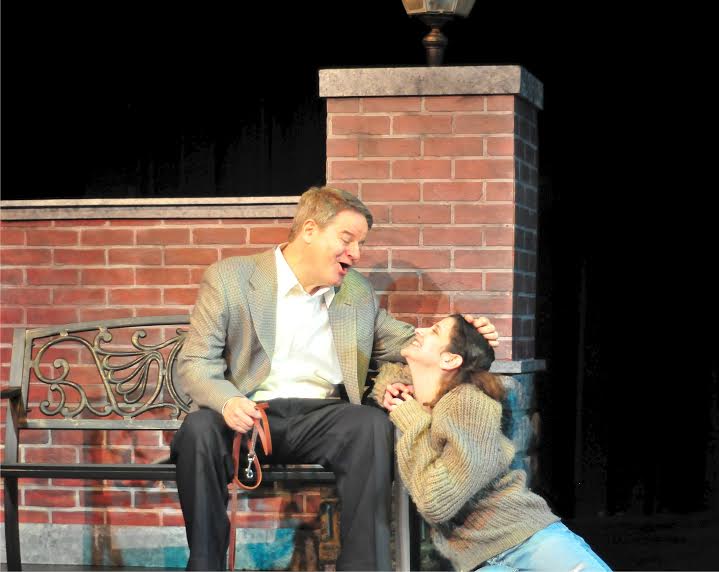 Greg and Kate’s children are in college, and their marriage and their Manhattan apartment could both use a little color. A rambunctious, shoe-chewing Labrador-Poodle mix named Sylvia, however, is not quite what Kate had in mind.

What was supposed to be the beginning of freedom from kids becomes a battle of man’s best friend versus his wife in A.R. Gurney’s comedy Sylvia, playing at Stage Door Players through June 7.

Kate, rendered perfectly by Jo Howorth, is working on her master’s degree and wants to teach Shakespeare to students in Harlem; Greg (James Baskin) is on leave from his job because of an intense mid-life crisis. He takes solace in a dog that he finds in the park wearing a collar with the name Sylvia (Amanda Cucher).

Greg and Sylvia are like bright-eyed newlyweds — taking long walks in the park and going to the groomer, but Kate sees Sylvia as a nuisance, and eventually a nemesis. But, as time goes on, Kate and Greg’s dissent over Sylvia shows them each other more clearly and forces them to fight for their marriage.

The set is simple and plain with beige walls, beige curtains, a tan sofa and khaki striped chair. There are no flowers, family photos, knickknacks or chotchkies.

For audiences seeing Sylvia, suspension of belief is definitely required because there is no attempt to make the actress look like a dog. Cucher, as Sylvia, wears a brown cardigan sweater, light denim jeans with holes in it, UGG-like boots, pigtails and knee pads.

She commits to the personality, but she does not fully inhabit dog-like movements or mannerisms. Cucher’s Sylvia is more like a mistress or small child in her disposition most of the time, which is partially due to the acting, but also due to the writing.

Sylvia was written in the early 1990s, and possesses that Woody Allen-style of writing that is reminiscent of his film Manhattan Murder Mystery. The play feels dated in a way that is not nostalgic, but rather regressive. Even now, Allen has to temper his own style by bringing audiences into a dream-like state or foreign place — Blue Jasmine, Vicky Cristina Barcelona, Midnight in Paris.

The very idea of wanting to control a woman the same way a dog is commanded has lost some of its humor. For the mostly silver-haired opening night audience, the jokes about a woman’s place being in the home and Greg’s tentativeness about Kate getting a master’s degree fell flat.

The beginning of the play is slow, but finds its footing when Kate’s friend Phyllis comes to visit and encounters Sylvia, who insists on sniffing up her skirt. Doyle Reynolds plays Phyllis, as well as one of Greg’s friends from the dog park and an androgynous marriage counselor. Reynolds is hilarious and steals every scene in which he appears.

From here, the cast seemed to find their momentum and fully commit. The funniest scenes in the play are when Sylvia first comes back from the dog groomer with a new attitude, white lace dress with a pink ribbon, and an up-do — she looks more like a teeny-bopper than a street kid now. The scene with the marriage counselor, Leslie, is also enjoyable as Greg goes on and on about Sylvia, but not Kate.

Still, even in those humorous moments, the pace of the play seemed off, because the times have changed. The play has a humorous take on the evergreen dilemma that empty nesters face as to what to do with the remaining 30 years of their lives. It gets tangled, however, in appearing absurd, considering its setting is three decades after The Feminist Mystique.

Some sense of balance is restored when Sylvia and Greg’s relationship changes after she goes into heat and has an affair with a dog named Bowser. There is a realization that Kate and Greg need each other, and that they will live happily ever after. After all, “any woman worth her salt [can handle an affair].”