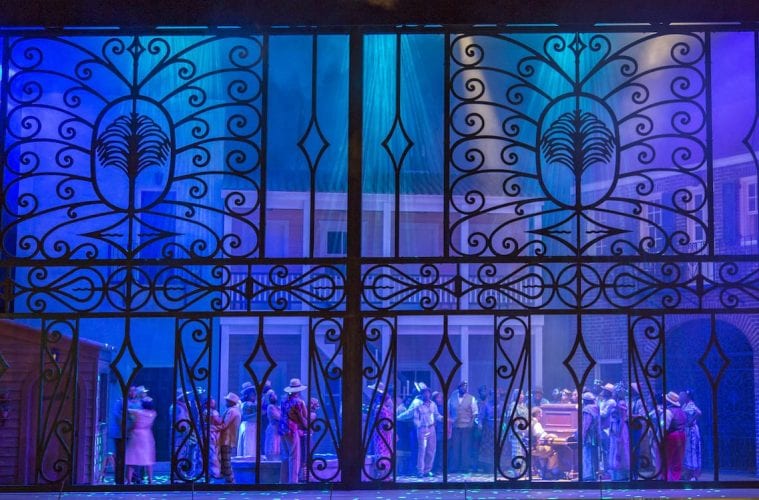 Review: Spoleto, at the age of 40, is still cutting edge after all these years

Charleston’s Spoleto Festival USA is celebrating its 40th anniversary with the grand reopening of the Gaillard Center, its major large venue, after a three-year renovation. Opera is always front and center here and the big event this season, mounted in the Gaillard, was the festival’s first-ever production of George Gershwin’s Porgy and Bess, an opera set in Charleston that continues to resonate here more than 80 years after it first opened.

Director David Herskovits teamed up with visual designer Jonathan Green to create a production that opened on a realistic Charleston street, which was then transformed over the course of the evening by the steady accumulation of African imagery. In their reimagining, the pageantry that is Porgy takes place in a setting that looked like Charleston, and they portrayed the black community of Catfish Row as joyful, hard-working, dignified strivers rather than the downtrodden denizens of a ghetto.

This was a production that, more than any I can recall, suggested the layers of mystery, magic, and spiritual metaphor that clearly exist in Porgy. More often than not, it succeeded.

It was a night of extraordinary singing, with a distinguished cast led by baritone Lester Lynch as Porgy. His powerful voice resonated through the theater and his portrayal was charismatic, searing. Soprano Alyson Cambridge was a dramatically effective Bess. Soprano Courtney Johnson was a solid Clara, and her “Summertime” was the vocal highlight of the whole evening. As Jake, we got baritone Sidney Outlaw with his huge voice, unforgettable in “A Woman is a Sometime Thing.” Victor Ryan Robertson was a superb, callow but almost sympathetic Sportin’ Life. 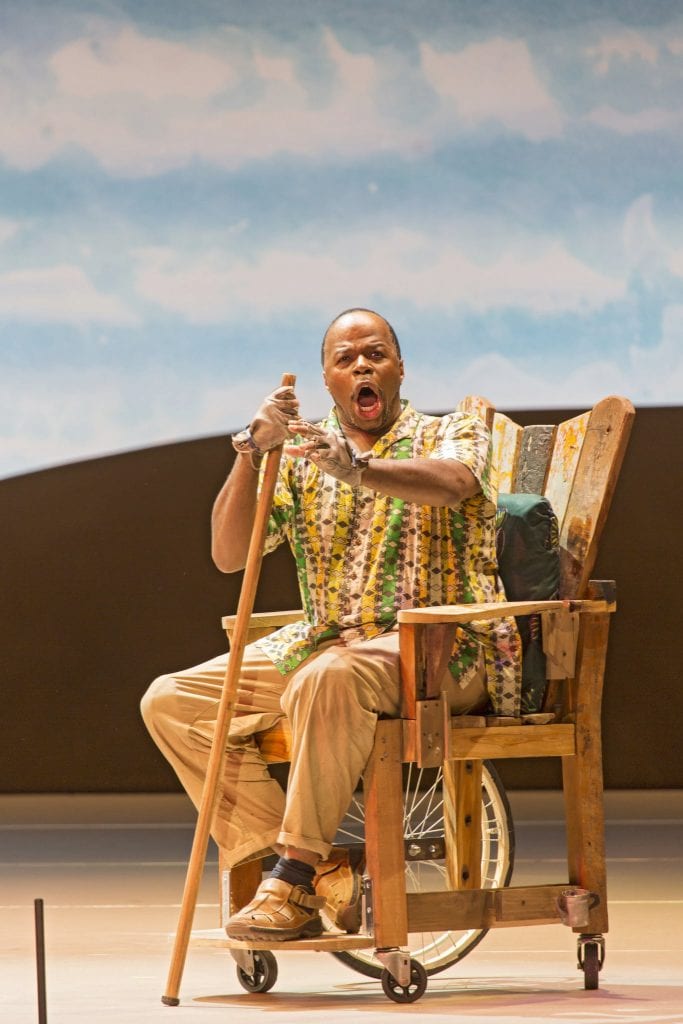 Atlanta’s Indra Thomas was outstanding as Serena, with a poignant “My Man’s Gone Now.”
Stefan Asbury conducted briskly. But the sound of the orchestra seemed very bright. This could be a problem with the acoustics of the reconfigured theater, though it’s such a great improvement over the old hall that it seems almost petty to point it out. And though it was impossible to follow much of the text, that probably wasn’t the fault of the acoustics: Porgy is always hard to understand.

Which brings us to the major problem of the evening: the decision not to provide projected titles. According to Nigel Redden, the festival’s general director, it was felt that the text could be perceived as demeaning by some in the audience, especially when rendered visually. The result was a three-hour muddle, especially for those in the audience who might not have been especially familiar with the text already. It was a mistake.

If the absence of titles was a problem with Porgy, the opposite was the case with The Little Match Girl, which had its U. S. premiere at the Memminger Auditorium here. Helmut Lachenmann wrote both the score and the libretto, which juxtaposes a tale by Hans Christian Andersen with two other texts: a letter from prison by Gudrun Ensslin, and a meditation by Leonardo da Vinci. Such complexity might suggest a chaotic mishmash, but the effect here is one of abstract poetic sounds from the latter texts (mostly untranslated) with more emphasis on the simple fairy tale of an orphan girl freezing death on the street.

Little Match Girl was presented almost as an oratorio. A giant shadow box was situated on the stage. The gigantic force of 120 combined orchestra and chorus musicians was arrayed, along with the soloists, atop the box and on platforms built above the sides of the room, giving the score an extreme “surround sound” effect.

And what a score! For nearly two hours, we got a constantly varying soundscape of whirring, hissing, cracking, rumbling sounds that suggested the horror-film world of a snowstorm as experienced by a tiny girl, shivering alone and unprotected. She was unsuccessful in selling her matches and when she lit them for warmth, we got rich, lavish sounds. The imaginative tapestry of sound came from inventive use of the chorus, unusual use of traditional instruments, a few exotic instruments, such as the Vietnamese sho (a type of mouth organ), and percussion, with some degree of amplification and electronic manipulation.

John Kennedy, the festival’s resident conductor, knows a thing or two about dealing with complex modernist scores, and this performance was a real coup. Two sopranos, Heather Buck and Yuko Kakuta, gave exceptional performances of difficult material. Adam Klein was the speaker, portraying Da Vinci. The festival’s resident chorus is the esteemed Westminster Choir, which outdid itself on this one.

Back to the business of the titles. In this case, torrents of words appeared on the shadow box screen, in a variety of fonts and designs, as in cartoons, alternating with simple shadow puppets, used in spooky, abstract suggestions of the drama, or at least the Andersen tale.

The audience seemed divided. I don’t think I recall ever seeing such a steady exodus of patrons, streaming down the aisles as the two-hour opera proceeded. But those who remained were mostly enthusiastic, cheering wildly and talking excitedly as they left the theater. I belonged to the latter camp. 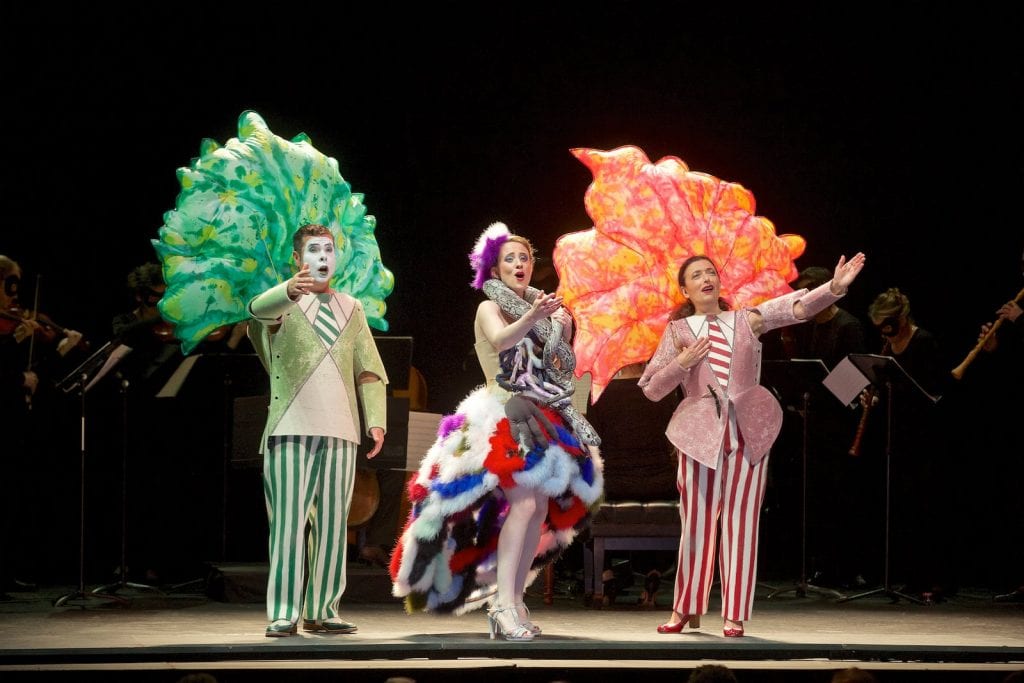 La Double Coquette is a French farce with a magnificent score. (Photo by William Struhs)

As usual, Spoleto is presenting three operas over the course of the festival. The third, La Double Coquette, is a liberally updated French farce never before seen in the United States. The work started out as La Coquette trompée, a 1753 opéra comique by Antoine Dauvergne with a libretto by Charles-Simon Favart. A modern French writer, Pierre Alferi, made “additions” to the libretto, and composer Gérard Pesson did the same with the score. The revised work stands nicely on its own. With a lighthearted updating by director Fanny de Chaillé and absurd costumes by Annette Messager, the opera becomes a very modern farce: a ménage à trois with a gender-bending twist.

But the real satisfaction of Coquette lies in the score, its late-Baroque sequences interlaid with everything from Romantic (Mahler is quoted) to Latin Jazz. Of the three singers, Isabelle Poulenard was especially persuasive, with a riveting portrayal that was both touching and wry.

The distinguished violinist Geoff Nuttall curates the chamber music series here, producing a splendid variety of music from some of the world’s greatest artists. I caught a couple of programs, featuring such works as “Lullaby and Doina,” written by Osvaldo Golijov for a small ensemble; an excerpt from Gordon Beeferman’s “Occupy Bassoon,” played ably by Peter Kolkay; and Fauré’s Piano Quintet No. 1.

I can think of no festival anywhere that has more going on, all at the same time, almost all of it cutting edge, from music to theater to dance and even visual arts. Among the headliners this season are the L.A. Dance Project, the Bill T. Jones/Arnie Zane Company, and Dublin’s Gate Theatre, which performed Oscar Wilde’s The Importance of Being Earnest.

Spoleto is the ultimate road trip for artsy Atlantans. Accommodations can be a challenge if you insist on staying “on the tongue” (the historic area), within walking distance of everything. But if you’re willing to commute from the burbs, there are many reasonable choices, and parking isn’t as onerous as you might think, thanks to Charleston’s great municipal garage system. For the major events, it’s best to purchase tickets ahead of time from the website, but for many events you can just show up and get tickets at the door. The festival, which opened May 27, continues through June 12.