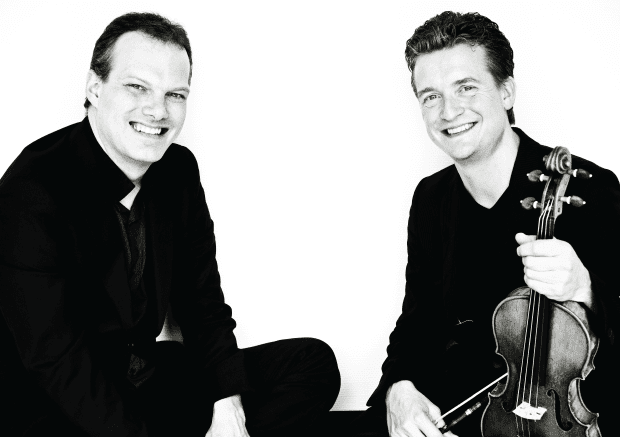 On Saturday night — drenched by tropical storm Nestor — the dark and stormy mood outside was carried into Spivey Hall for a recital by two exacting and brilliant Germans, violinist Christian Tetzlaff and pianist Lars Vogt. Esteemed soloists on the world’s stage, they are also frequent collaborators, well matched in temperament and effortless virtuosity and with a focused seriousness for everything they perform. They even wore matching shiny black suits on stage.

Their program was elegant and, in theory, held many contrasts. They opened and closed with popular, openhearted violin sonatas (by Johannes Brahms and Maurice Ravel) and, in between, lesser-known music by composers of incomparable intensity and mystery (Dmitri Shostakovich and György Kurtág).

From the first few notes of Brahms’ Violin Sonata No. 1, all the partnership’s strengths, and some of their limitations, were apparent. Tetzlaff draws a deep, rich tone from his violin. There’s no cream, no schmaltz, in his sound. It is at once wide, burly and silken, a thing of wonder. To his credit, he’s long eschewed the cult of Strads and Del Gesùs and instead performs on a handsome modern violin, putting aside the notion that only old Cremona masters know how to carve a good fiddle.

Vogt’s playing at the keyboard is comprehensive, in an instant orchestral in scope then scaled down to a gossamer thread, delicate and fragile. (And pianophiles take note: For this visit to Spivey, he picked the older Steinway nicknamed “Robert.”) Not surprisingly, Vogt also conducts and last week was named music director of the Paris Chamber Orchestra. Suffice it to say, Tetzlaff and Vogt are in demand everywhere.

But their Brahms was buttoned-up and respectful to a fault: warm in tone but not in feeling. After such a mild opener, they exploded with an intense, often savage account of Shostakovich’s Violin Sonata in G, Op. 134 — a late work, composed in 1968 for the great David Oistrakh. The composer creates an imaginative soundscape within a bleak worldview, beginning the first movement with a 12-tone row — all the black and white keys that make an octave on the piano. It’s the cornerstone of mid-century modernism but for Shostakovich a creative device to fuel his embittered tonal harmonies. Weird effects once again felt startling, such as the eerie sound of scraping steel wire from the violin, or spooky bells tolling at a distance in the piano’s lower range. Tetzlaff and Vogt’s musical bond paid huge dividends here, their communication absolute.

The sonata’s middle movement is one of Shostakovich’s manic and supercharged howls of pain — the composer expressing rage at the Soviet system, at all the oppression and deception, and maybe disappointment at humanity itself — with slashing chords and murderous attitude. These guys played it straight, where other musicians might find moments of cartoonish excess or heavy sarcasm. In their view, the heavy finale came off as a balm for wounds that will never heal.

They continued the evening’s theme with three wispy miniatures by Kurtág, collected as Tre Pezzi (“Three Pieces,” Op. 14) from 1979. You didn’t need to know that the first piece is marked “bleak and sad” to pick up on the mood. We don’t hear much Kurtág around here, so his inclusion on a program is always highly anticipated.

Like most of the Hungarian composer’s output, these are terrifically compressed little music dramas — telling a story, asking unanswerable questions, conveying emotion with sighs and silences — all packed into a minute or two of music. Violin and piano played as a single entity, long-suffering and breathing together, just right. (Kurtag’s wife, Marta, a pianist, composer and muse, had died two days before this recital, although her passing wasn’t mentioned from the stage.)

The evening’s thoroughly dour mood was finally broken as Vogt immediately launched into the tinkling opening notes of Ravel’s Violin Sonata No. 2 . . . , but Tetzlaff turned his back and walked away. The music stopped. (He’d forgotten his music backstage. The audience laughed and applauded.)

When they restarted, they somehow connected this Ravel to Shostakovich in severity, as if the dapper Parisian composer, in the jazz-age of the 1920s, also lived a life in terror of being sent to a Soviet gulag. It was Ravel cut with a very sharp knife — dazzling to hear for its precision-tooled technique but ignoring what the composer was after.

They twisted and tightened the “blues” movement — a Frenchman’s impressions of that loose, quintessentially American sound, what he might have heard at the Cotton Club or a street corner in New Orleans — to the edge of ferocity. It was less Porgy and Bess and more Wozzeck.

The “Perpetuum mobile” finale whizzed by at top speed, fearlessly, without much swing but with sparks flying in all directions.

As an encore, they played a slow movement from a Beethoven Violin Sonata (Op. 30, No. 1). To reinforce that their opening Brahms was not underprepared, they played Beethoven with the same rich tone and stiff formality.