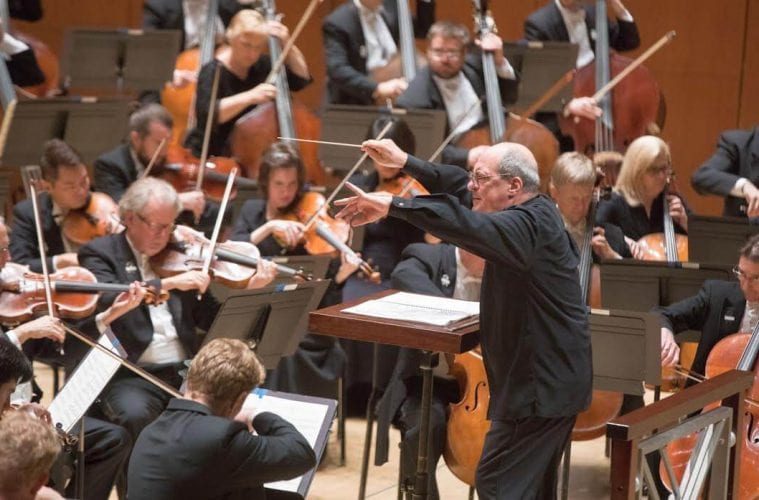 On Thursday evening in Symphony Hall, the Atlanta Symphony Orchestra, led by music director Robert Spano, performed a concert of music by Buller, Britten and Wagner, with a trio of featured guest vocal soloists: soprano Twyla Robinson, tenor Clifton Forbis and bass Daniel Sumegi. The program will be repeated on Saturday evening at Symphony Hall. These are the final concerts in the ASO’s 2016–17 season’s classical subscription series.

The concert opened with a world premiere, Mark Buller’s “The Songs of Ophelia.” The commission to write the work for the ASO was one of the prizes Buller earned as winner of the national Rapido! Composition Contest in 2016. His other commissioned work from the contest, “Motion Studies,” was premiered by the Atlanta Chamber Players in 2016, then repeated by that same ensemble as part of Atlanta’s SoundNow contemporary music festival in early April.

The idea behind “The Songs of Ophelia” piece came from when Buller first looked at the other pieces that were scheduled on the program. He noticed both obviously come from operas and that each have female characters he felt were extremely important to the story but somewhat “sidelined” in some ways as characters: Ellen Orford in Peter Grimes and Sieglinde in Wagner’s Die Walküre. From that observation, Buller chose to tell a dramatic story of another famous character, Ophelia, from Shakespeare’s Hamlet, who is, again, critical to the story but has very little dialogue. “I just tried to flesh out her character and give her a story by writing a few orchestral songs,” says Buller, gesturing “air quotes” with his fingers — meaning a musical portrait for orchestra without voice. “The Songs of Ophelia” is a work of considerable melodic and textural attractiveness, rich in orchestral color, that portrays its subject in her emotional progress from innocent maiden to a melancholic, twisted kind of ingenue — though Buller dwells far less on the latter.

If there is a shortcoming to “The Songs of Ophelia,” it would be its brevity — a total duration of six minutes. It feels like we want more, maybe as the first of a group of such musical portraits — or perhaps more fittingly as the entr’acte to Act III of an opera based on Hamlet? That would not be surprising, because although he has not written a full-length opera yet, Buller has two 45-minute operas for young audiences under his belt, commissioned by Houston Grand Opera, and a 15-minute opera for girls’ chorus — all three with librettos by Charles Anthony Silvestri — as well as a considerable array of songs and song cycles.

Buller’s music was in many ways favorably comparable to that which followed, “Four Sea Interludes” from Benjamin Britten’s opera, Peter Grimes. Enough so that during the intermission that followed, one musically astute audience member remarked, “I had to remind myself that this was Britten I was listening to now, not a continuation of Buller’s piece.” While there are observable differences in the two composers’ styles, there is enough of a noticeable affinity of tradition that the remark has some credibility.

In as much as Britten’s “Four Sea Interludes” ended with an orchestral portrayal of a raging storm, likewise Act I of Richard Wagner’s Die Walküre began with one. In its midst, Siegmund (tenor Clifton Forbis) seeks shelter at the home of the warrior Hunding (bass-baritone Daniel Sumegi) who is not present, but is greeted by Hunding’s unhappy wife, Sieglinde (soprano Twyla Robinson). Siegmund, brave but weaponless, is fleeing from enemies. Sieglinde invites him to stay and rest. Hunding returns, and is not thrilled, but offers Siegmund the customary hospitality of shelter for the night.

Without going into a complete synopsis, in brief: Siegmund sings his backstory, Hunding turns out to be one of Siegmund’s pursuers and promises to do battle with him in the morning, then goes off to bed. Conveniently, Siegmund and Sieglinde by this time have fallen in love. Less conveniently, they also discover themselves to be twin brother and sister. A magic sword just happens to be stuck in a giant ash tree — growing in the middle of the house, no less — impaled there by their lost aged father (not seen in this act), who later turns out to be the god Wotan. The act ends with a kiss that foreshadows incest. (Hollywood has nothing over Bayreuth in these matters.)

Unlike the ASO’s elaborate production of Gluck’s Orfeo in mid-May, for Die Walküre, Act I, the performance was essentially unstaged — the singers were attired in concert dress, afforded chairs to sit on, but also the downstage apron to act and interact upon, as well as making use of entrances and exits from the stage. Of the three singers, Forbis performed the role of Siegmund entirely from memory and made the most of his acting ability; Robinson carried a vocal score, though she didn’t always use it, and her acting was limited more to visual and vocal interaction than theatrical gesture; the stentorian Sumegi played his part somewhere in between.

The absence of staging didn’t matter much, as this is one of those “stand there and sing” opera acts where you have to follow the libretto rather than the action to know what’s going on, especially the long-spun backstories — and Wagner takes his time doing that, this act being over an hour long by itself. There are two more acts in Die Walküre, which itself is only the second opera in the four-opera Der Ring des Nibelungen (The Ring of the Nibelung) cycle.

Thus, Act I of Die Walküre is not for the young and restless and impatient. Even as well performed as Thursday’s performance was, as beautiful as the music may be, you really have to love Wagner. Maybe a dozen people left the hall before the end. One young woman to my immediate left began a continual bout of Facebook messaging about a third of the way through, her cell phone light going on and off repeatedly as she did so. She was one of those who eventually got up to leave later, although she was delayed a few moments by a low-volume verbal confrontation with one of two older gentlemen to my right, who seemed particularly annoyed by her behavior. At the end of the row, they both left just after it ended, as the ovation began.

In advance of Thursday’s performance only, members of the ASO performed a preconcert chamber music recital with repertoire related to the orchestral program to follow. Britten’s “Phantasy Quartet” — a work of impressive formal intricacy, written when the composer was 19 — was performed by oboist Elizabeth Koch Tiscione, violinist Christopher Pulgram, violist Yiyin Li and cellist Brad Ritchie.

It was followed by Wagner’s “Siegfried Idyll” in an arrangement for strings and piano by Alfred Pringsheim, a German mathematician and patron of the arts. It was performed by violinists Jun-Ching Lin and Carolyn Toll Hancock, violist Paul Murphy, cellists Daniel Laufer and Brad Ritchie, and pianist Peter Marshall. These chamber works proved a fine appetizer to the orchestral main course.