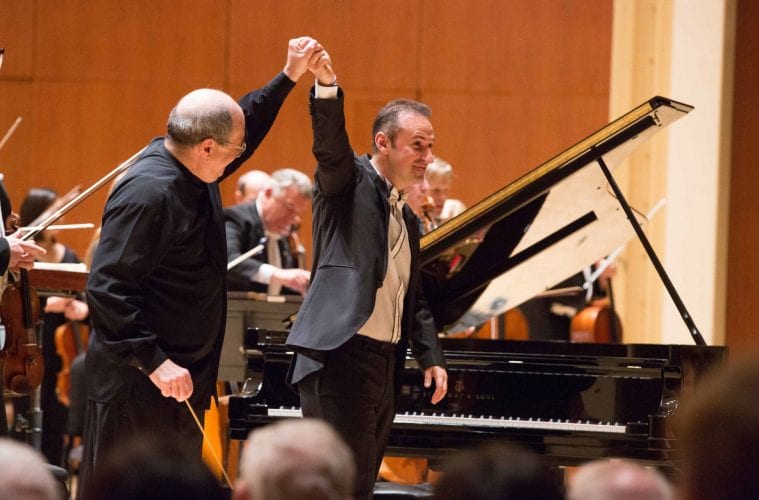 Review: Spano leads ASO through a program of despair, hope with Shostakovich and Rachmaninoff 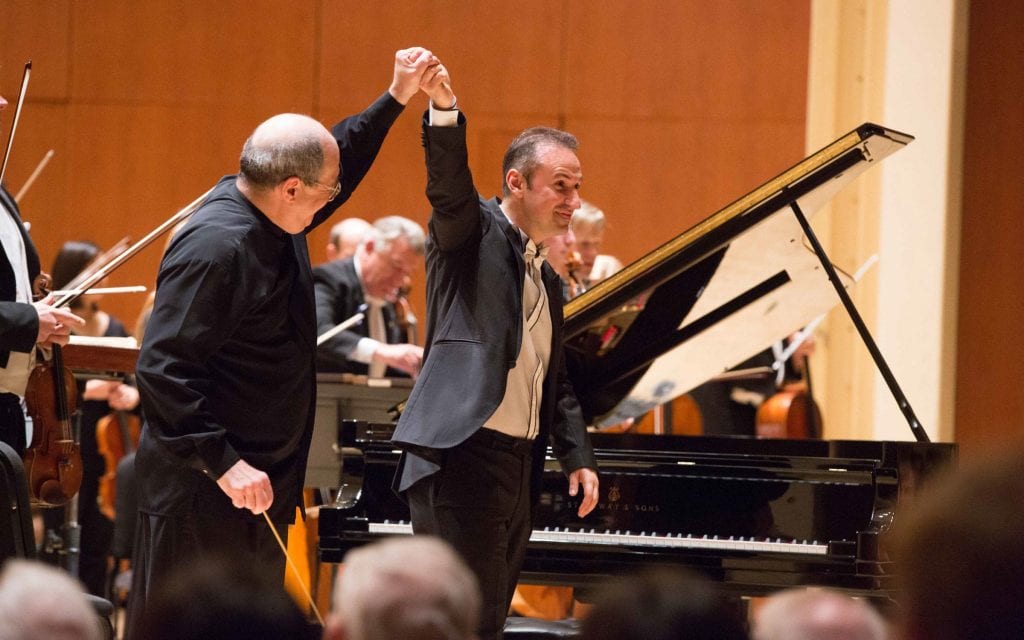 On Thursday evening at Symphony Hall, the Atlanta Symphony Orchestra performed a concert of music by Shostakovich and Rachmaninoff, led by music director Robert Spano, with soprano Tatiana Monogarova, bass Morris Robinson and pianist Simon Trpčeski as and featured soloists. The program was repeated on Saturday evening.

Prior to Thursday’s concert, the usual pre-concert lecture was replaced by a chamber music recital, with audience gathered onstage as well as scattered about the hall. In line with the Russian theme of the orchestral program to come, Igor Stravinsky’s Octet for Wind Instruments (1923) was performed by eight ASO musicians: trumpeters Stuart Stephenson and Michael Tiscione, trombonists Nathan Zgonc and Brian Hecht, flutist Todd Skitch, clarinetist Laura Ardan and bassoonists Andrew Brady and Laura Najarian. Brady is the ASO’s new principal bassoon, who made his subscription concert debut with the orchestra just last week.

It was a cheerfully jaunty and ably played performance of Stravinsky’s landmark Octet, in which the composer turned to a neoclassical style in which he would persist and would impact the composing world even more than the success of his previous neo-primitive works. In the manner of a lecture-demonstration, coordinated by ASO program annotator Ken Meltzer, the musicians demonstrated key parts of the piece before performing the entire work, which was followed by a question and answer session with the audience.

The orchestral concert proper opened with the Symphony No. 14 by Dmitri Shostakovich, a work that is to be respected rather than loved. The 51-minute work is persistently dark in emotional character, the poetic texts of its 11 movements by Federico García Lorca, Guillaume Apollinaire, Wilhelm Küchelbecker and Rainer Maria Rilke take a long procession of musings upon death.

In that respect, although Shostakovich titled it as a symphony, it is more akin to an extended song cycle like Schubert’s “Winterreise.” Written for soprano and bass soloists — and an orchestra comprised of percussion, celesta and a small compliment of strings — Shostakovich’s penultimate symphony is a troubled human journey in the shadow of death, with no light at the end. 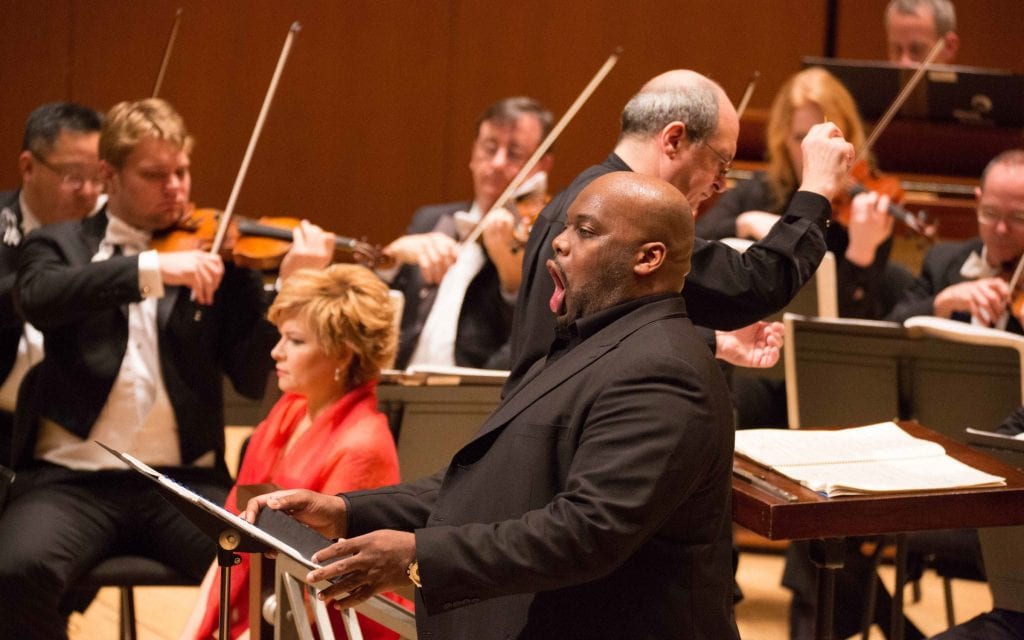 Nevertheless, it is an impressively wrought piece of high musical quality. One only need the fortitude to listen deeply and get through it without being emotionally wrung out. That said, it was a thoughtful, substantive performance. The clarity of the small orchestra underscored the solo voices well without losing depth of expression.

The soloists, Monogarova and Robinson, were superb and well matched to the music, which was sung in Russian with English supertitles projected above. Among solo passages for members of the small orchestra, especially notable was an extended duet with Monogarova played by associate principal cello Daniel Laufer, temporarily seated in the principal’s chair while principal Christpher Rex remains indisposed from recent illness.

Monogarova, who possesses a rich and creamy, expressive soprano voice, had already performed Symphony No. 14 earlier this season with the Munich Chamber Orchestra. She last appeared with the ASO in 2011 as soprano soloist in Rachmaninoff’s “The Bells.”

The deep and broad-voiced Robinson, a native Atlantan who is the ASO’s artist-in-residence this season, was most recently heard in December in a lighter context, the ASO’s “Very Merry Holiday POPS!” and was heard again Friday in another special, the ASO’s annual “Dr. Martin Luther King, Jr. Celebration Concert.”

After intermission came the Piano Concerto No. 2 by Sergei Rachmaninoff, an audience favorite. Rachmaninoff, obliged to write a new concerto, became inspired while being treated by Russian physician Dr. Nikolai Dahl for deep depression, a consequence of the disastrous premiere of his Symphony No. 1.

Rachmaninoff credited Dahl’s auto-suggestion therapy with breaking his creative block, and dedicated the Piano Concerto No. 2 to him.

Just as it was for Rachmaninoff a psychological arising from darkness to light, so too was the late romantic concerto’s performance for Thursday’s audience — a welcome bit of musical healing and recuperation.

Macedonian-born pianist Trpčeski, the soloist, demonstrated the velocity, technique and emotive acumen to perform the concerto convincingly, though one would have liked a little more “oomph” and a larger and more rounded tone to his playing, especially in the more full-bodied sections of the work.

Afterward, Trpčeski returned to the stage for a contrasting encore, Frédéric Chopin’s charming “Trois Écossaises” where the pianist’s brilliance was quite at home.