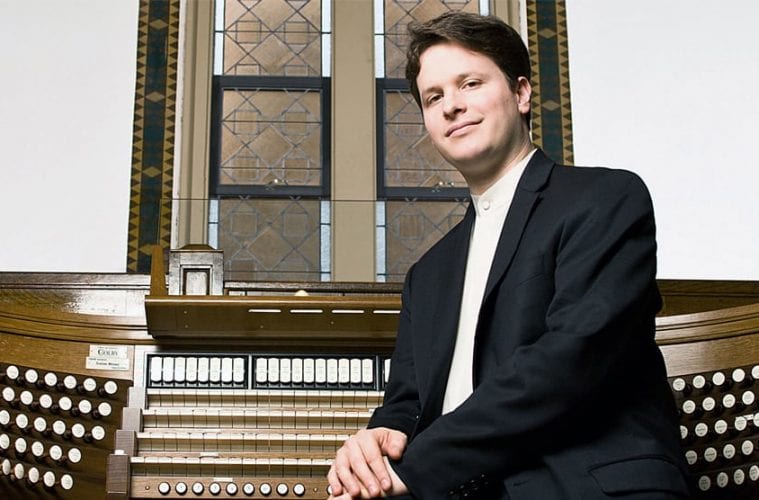 Anyone who has visited Spivey Hall — Clayton State University’s exquisite concert venue — has undoubtedly noticed the 50-foot-high and 37-foot-wide pipe organ, adorned with gold leaf casework that serves as the focal point of the space. It is the pièce de résistance of the theatre: a 79-rank, 3-manual, 4,413-pipe organ, designed and constructed in Padua, Italy, that emits an awe-inspiring wash of sound.

On Saturday afternoon, executive and artistic director Sam Dixon and university president Dr. Thomas Hynes, Jr., commenced Spivey Hall’s 25th anniversary with a brief introduction and then surrendered the stage to organist Paul Jacobs and soprano Christine Brewer. It was an afternoon to highlight the hall’s stunning Fratelli Ruffatti organ and to begin a promising year of concerts.

Paul Jacobs is a Grammy Award-winning concert organist and chairman of the organ department at The Juilliard School in New York City. He opened the concert with J.S. Bach’s Sinfonia from Cantata No. 29, initially the prelude to Bach’s Violin Partita in E major, BWV 29, and subsequently transcribed by Marcel Dupré. The piece is jubilant, and Jacobs impressively articulated its exuberance at breakneck speed. Afterward, while taking his bow, he acknowledged the organ with a smile.

Jacobs’ duo partner, Christine Brewer, joined him for the well-known “Bist du bei mir,” a song that every beginning vocalist encounters during studies. The song is attributed to Bach in countless anthologies, but in recent years musicologists have claimed that it was actually composed by Gottfried Heinrich Stölzel for his opera Diomedes. Brewer is certainly not a vocal neophyte, however, and to hear her sing “Bist du bei mir” took one’s breath away. The 59-year-old soprano is recognized internationally for both the beauty and power of her voice, ideal for the operas of Wagner and Strauss. Brewer has sung the role of Richard Strauss’ Ariadne around the globe, but occasionally stops in Atlanta to sing at Spivey Hall or perform with the Atlanta Symphony Orchestra at Symphony Hall. This day her voice sounded fresh and lustrous.

The Brewer-Jacobs recital wasn’t one that would excite an academic or concertgoer expecting a balanced offering of art song. Rather it was an homage to traditional sacred music that one would hear at church. The duo graced us with Franck’s “Panis Angelicus,” and both Schubert and Gounod’s versions of “Ave Maria.”

Included was Charles Gounod’s “O Divine Redeemer,” the powerful supplication of a sinner asking for God’s clemency. Brewer performed the song in English and unleashed the full range of her dynamic ability. The musical petition was performed not carefully or with any attention to technical precision, but with abandon.

In addition, both Brewer and Jacobs gave a nod to the Boulanger sisters, offering our ears some contrasting sonorities. Jacobs played Nadia’s “Three Pieces for Organ,” an early 20th century gem that incorporates both chromaticism and provocative modulations. Brewer sang Lili’s “Pie Jesu.” The composer originally scored it for voice, string quartet, harp and organ, but also created a version for voice and organ that Lili dictated to her older sister shortly before dying in 1918 at the tragically young age of 24.

Jacobs concluded the afternoon with Charles-Marie Widor’s Toccata from Symphony No. 5, Op. 42, a work often heard during recessionals at weddings or at the conclusion of Christmas Mass. The piece conveys a sense of celebration with a prominent bass line and layer upon layer of voicing. Widor’s consistent rhythmic motive and command of fortspinnung leads to a grand plagal cadence. It was well-played by Jacobs and showcased the beauty of Spivey Hall’s Albert Schweitzer Memorial Organ to great effect.