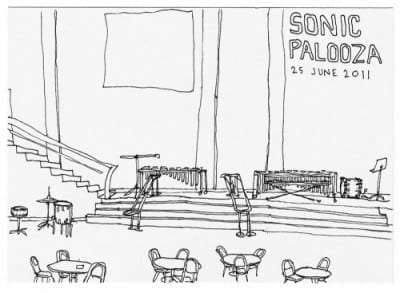 About 15 minutes into the final piece in a 10-hour marathon, the musicians on stage seemed in a trance, not from exhaustion but from elation, repeating their motions like workers on an assembly line yet, as a group, pumping out an ethereal balm. In his supreme “Music for 18 Musicians,” composer Steve Reich gives this patch of music the blandly industrial designation Section 3A. In performance, Section 3A provoked such a visceral reaction that I wasn’t sure whether I was having heart palpitations or about to burst into tears.

Reich’s “Music for 18 Musicians” — from 1976 and here involving 20 musicians — closed the inaugural SONICpalooza, a free, all-day, come-as-you-please concert of contemporary music held in the lobby of the Woodruff Arts Center. As a local knockoff of New York’s prized and reviled Bang on a Can Marathon, SONICpalooza’s aims were lofty: escape the new-music ghetto and lure a broad, arts-loving crowd to sample (or be saturated by) contemporary classical music, mostly of the hip and ear-friendly Minimalist and post-Minimalist variety. 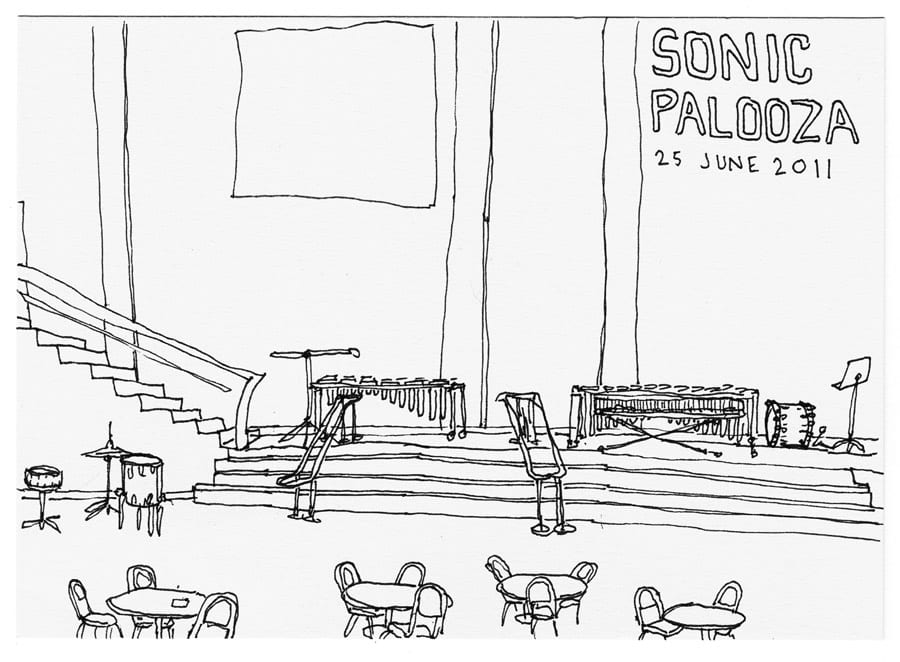 Drawings by Jon Ciliberto, courtesy of the artist.

Musically, it came off brilliantly. Planned and produced by percussionist Tom Sherwood and flutist Jessica Peek Sherwood, his wife, the show was under the auspices of Sonic Generator, although it strayed far from the ensemble’s core mission of integrating music and technology; except for amplification, many of the pieces were meant to be all-acoustic and extremely low tech, such as Reich’s “Clapping Music.” Many of the musicians have connections to the Atlanta Symphony Orchestra. They played on a small stage in the middle of the long, rectangular lobby. T-shirts and jeans were de rigueur. The last sets of music included videos by local performance artist Neil Fried, which weren’t specifically linked to the music and didn’t make much of an impact. 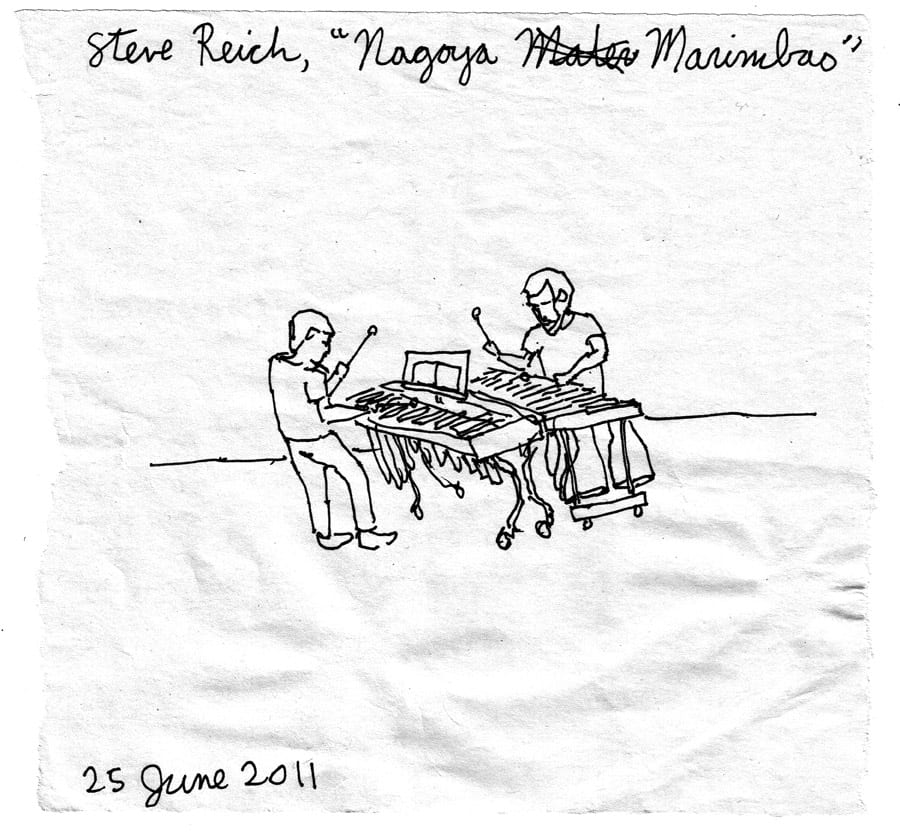 There were a few hitches. The audience was never as large or as “artsy” as had been hoped. (I counted about 150 people at the finale, the biggest crowd of the day.) Some logistically complex works, such as George Crumb’s folkloric and mystical “Unto the Hills,” suffered amplification problems — Wanda Yang Temko’s pretty soprano was under-miked and throbbing feedback muddied the performance. Almost as unfortunate: the gourmet food trucks parked outside on the plaza served little purpose for an event that ran until midnight. They were on hand at the 2 p.m. start but departed hours before dinnertime. (The Woodruff’s own food service consists of overpriced Coca-Cola products and PBRs, cheap wine and Twix candy bars.) The Woodruff staff, too, seemed unprepared: security personnel patrolled with their walkie-talkies blaring, squeaky-wheeled trash carts rolled on their appointed rounds, and maintenance staffers chatted and laughed as if no one could hear them. These concerns, mostly trivial, might be considered for future marathons. 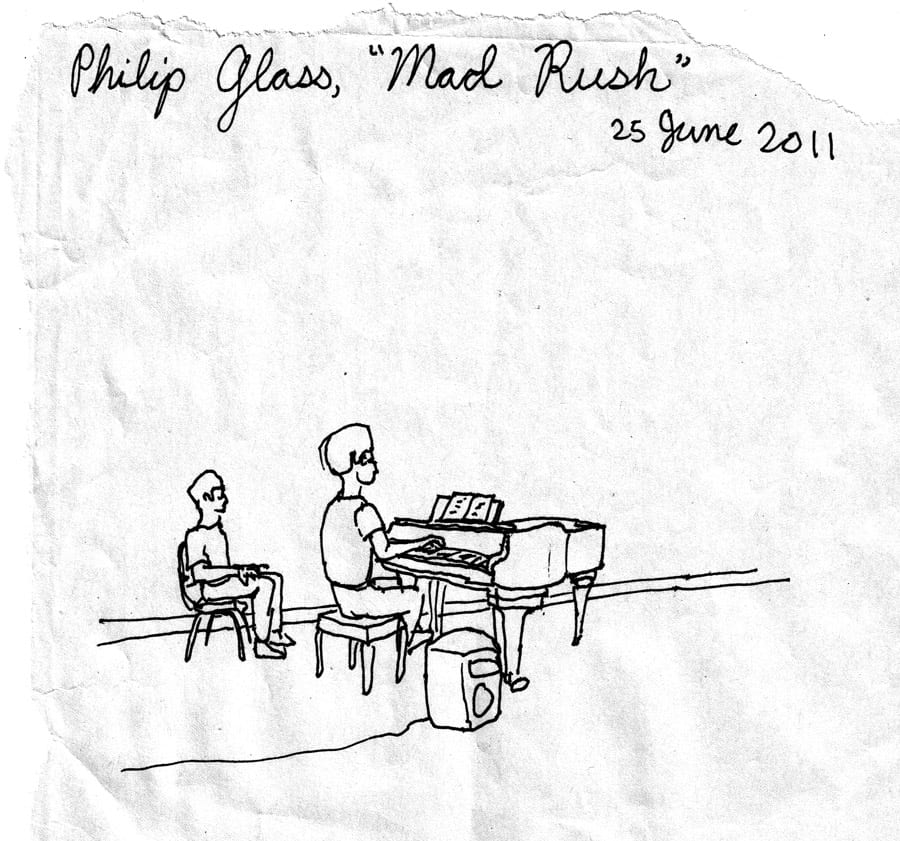 While George Crumb’s nuance didn’t register in the lobby space, much of the music sounded spectacular. Reich’s “Nagoya Marimbas,” played on the stage by Tom Sherwood and Charles Settle, echoed primeval throughout the lobby. Reich’s “Music for Pieces of Wood” was delivered unseen from the balcony by a quintet of percussionists. All atmosphere and vibe, it felt just right. 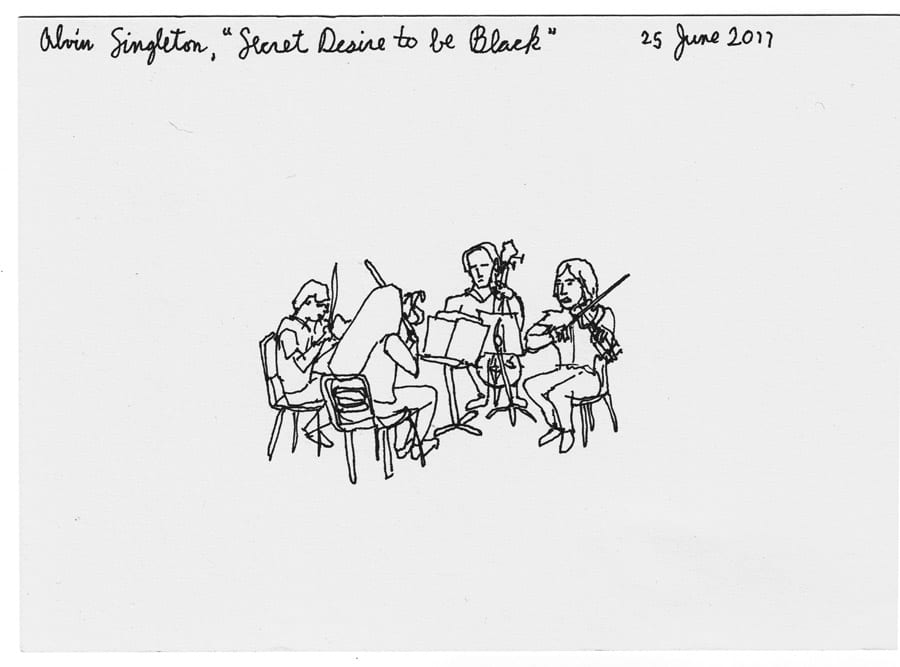 Just three Atlanta-based composers were included in the 10 hours of works. Alvin Singleton’s “Secret Desire to Be Black,” a string quartet, is stiff and uneasy at the start, where an idea is stifled, trying to get out. The music grows urgent and even more tightly wound as it picks up speed. The materials are engaging, and the quartet played it beautifully, but it was hard to be relaxed while listening. By the end, the four voices are each going their own way, making powerfully contradictory statements. Does it really end in peace? Or in defeat? The music itself raises abstract ideas that it refuses to answer.

Native Atlantan Mark Gresham, a composer and music journalist, wrote “Genshi” several years ago as a wedding present for violinist Helen Hwaya Kim and clarinetist Ted Gurch. The music is infused with a melancholy Eastern European spirit, almost a Jewish lament, with echoes of Stravinsky’s neo-classicism. Gentle and equitable — each instrument plays to its strengths — “Genshi” held the room rapt.

Jason Freeman is a Georgia Tech professor and the executive director of Sonic Generator, although he says he had almost no involvement with SONICpalooza, which cost $10,000 and was paid for by the Woodruff Arts Center. Flutist Jessica Sherwood played Freeman’s “Sonorescence,” one of his loveliest scores, where a simple little figure repeats and is modified and fills out a two-dimensional plain. Sherwood slowed it down with each iteration, gaining in heft. 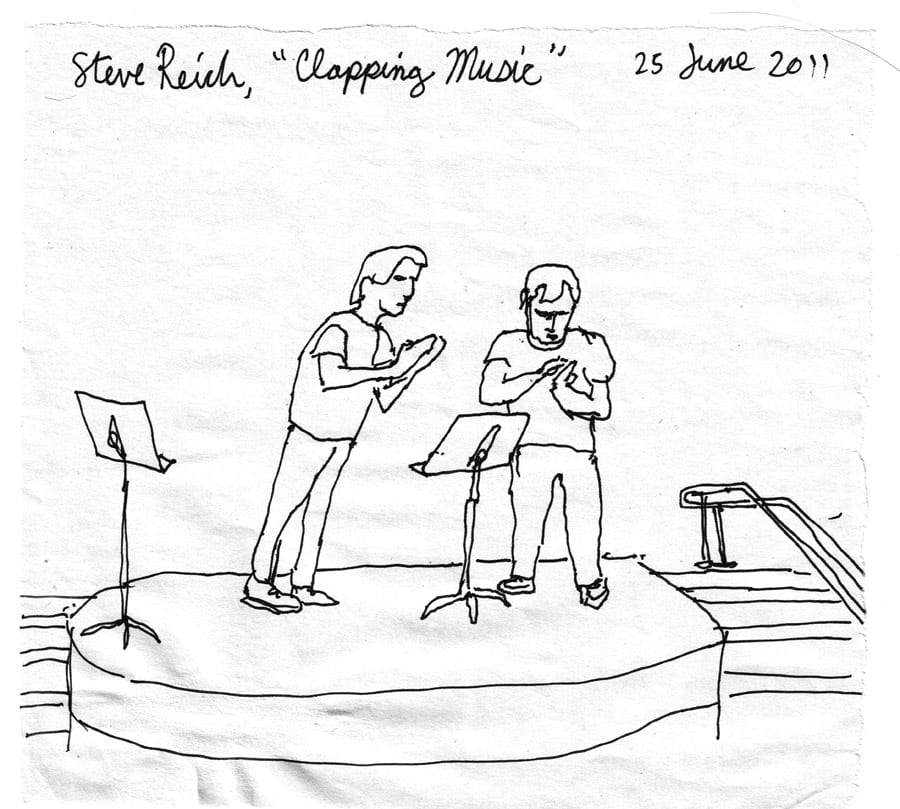 There were some discoveries, some expected pleasures, and a few duds. Phil Kline’s “The Last Buffalo” — played by pianist Whitehead, percussionist Settle and cellist Brad Ritchie — makes generic Minimalist moves and is fun to hear but is devoid of content. Is it a satire of Bang on a Can’s self-conscious, slacker-classical ethos?

Frederic Rzewski’s “Coming Together” was politically charged at the height of the Vietnam War protests. The text is a spliced-up letter from Sam Melville, convicted of bombing the Chase Manhattan Bank in his fight against America’s financial-military-industrial complex. While an inmate at New York’s Attica prison, Melville was killed during the 1971 riot there, and the composer made the work a year later. Six instrumentalists played repeating “cells,” adding and then subtracting new material to form a bell curve of music. Rather than a singer, the score calls for a speaker to deliver the text. Michael Kurth, himself a composer and ASO bassist, didn’t have an actor’s compelling voice or sense of delivery to pull it off. (Local actor Tom Key, who has enough theatrical control to convincingly impersonate a madman, would have been ideal.)

Short works by two 20-something composers held their own. Tristan Perich combines live performers with 1-bit electronic processing, juxtaposing 1970s technology with the sleek post-Minimalist sounds of today. In their oddly compelling and clever ways, Perich’s “A/B/C/D” (for solo flute and automobile speakers) and “Observations” (for crotales and automobile speakers) were highlights of the day. Timothy Andres’ “Crashing Through Fences,” played by the Sherwoods, opens with a jolting thwack of bass drums, which later punctuates the bright, pastoral and childlike tunes from piccolo and glockenspiel. Despite using rather ordinary sounds, Andres’ voice is special. 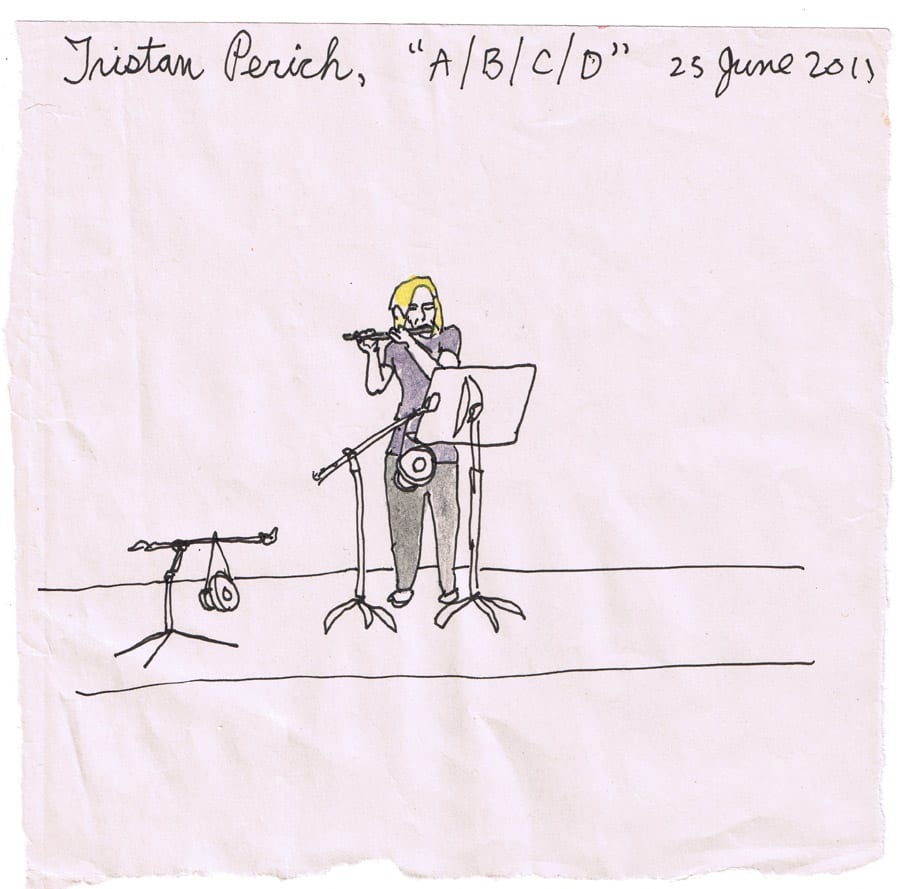 Mark Mellits wrote his Cornell University thesis on “Music for 18 Musicians” and assisted Reich in transcribing the composer’s shorthand into a printable score, which was later published. Mellits’ own music owes almost everything to Reich’s aesthetic, but the pupil is considerably less subtle than the master. Two of his works were programmed at the marathon: “Tight Sweater” and “Red.” A composer doesn’t have to invent a language to make good use of it, of course, and a work like “Tight Sweater” is a charming, sincere (unlike Phil Kline) and authentic piece of music.

John Cage, the granddaddy of classical music “happenings,” was included with “Credo in US,” where moments of jazzy elegance and savage cool were interspersed with tin-can cacophony and the vintage sounds from a 12-inch black vinyl LP record, which was ritualistically removed from its cardboard sleeve and spun on a turntable. A buzzer intruded at all the wrong times, to comic effect. As always, Cage shows best the absurdity of this thing called music, which is really just organized noise. 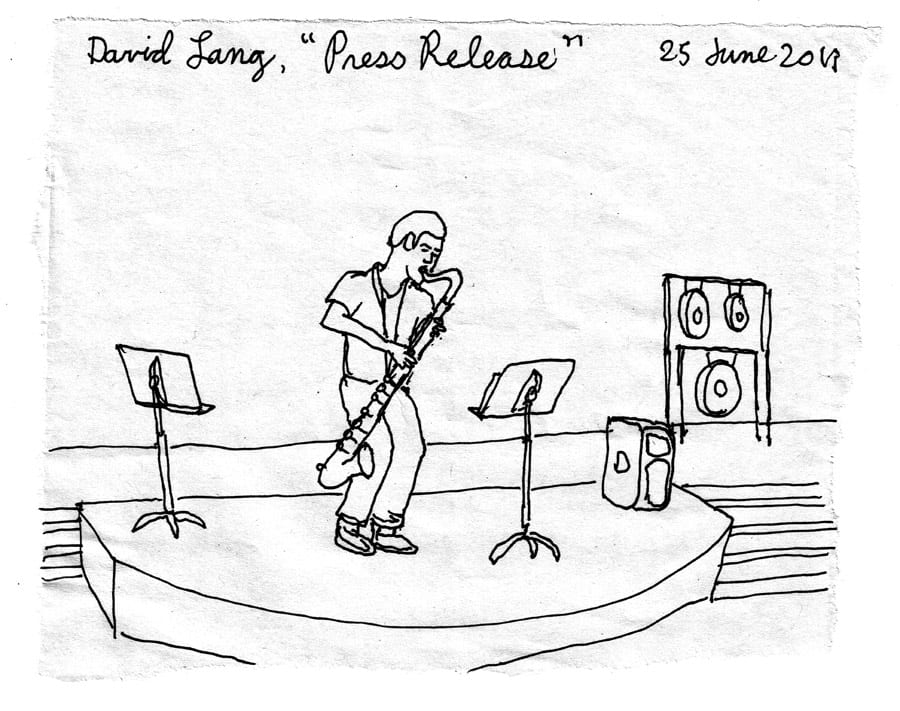