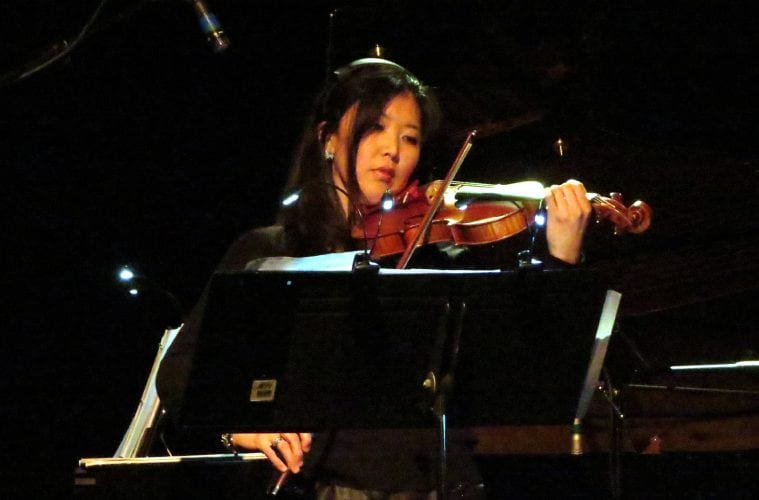 On Wednesday, high-tech new music ensemble Sonic Generator performed the first concert of their season at Terminal West, the über-hip 7,000-square-foot music and special events venue at the King Plow Arts Center on the Westside.

The concert opened with “New York Counterpoint” (1985) by American minimalist Steve Reich, one of his best known works, performed by clarinetist Ted Gurch. Gurch’s amplified live clarinet was set against a fixed audio recording of multiple clarinets, including a bass clarinet. A portrayal of the vibrancy of Manhattan, multiple layers of sound arise from the rhythmically intricate interplay among the parts.

Pianist Tim Whitehead performed “Tidal” (2012) by Atlanta native Adam Scott Neal, which also included recorded audio. For source material, Neal selected chords derived from the natural harmonic series of a low C (three octaves below middle C), based on the “difference tones” they generate. The fixed audio part constantly shifted between intonation and equal temperament while the piano part made allusions to classical piano sonatas. The title comes from a metaphor Neal uses for how the work’s musical elements expand and contract, “like tidal motion and surface waves” in an ocean.

The group turned again to New York for inspiration with “Cheating, Lying, Stealing” (1993, rev. 1995) by David Lang, the Brooklyn-based composer who cofounded Bang on a Can. The 11-minute work for bass clarinet, cello, piano, percussion and two antiphonal automobile brake drums was a rhythmic, industrial-edged piece well suited to Terminal West, a location with 100-year-old origins as an iron and steel foundry for agricultural tools and equipment. After an intermission, the group performed Christopher Cerrone’s “The Night Mare” (2011) for seven players and electronics. The nine-minute piece begins with what Cerrone describes as “half-remembered sonic fragments of my daily ritual,” which progressively become more ordered and recognizable, then familiar musical textures that ultimately cohere, but only briefly — like an abrupt awakening from a dream. The piece required a conductor, hence a new face among the players: Chaowen Ting, who is the new director of orchestral studies at Georgia Tech and conductor of the Georgia Tech Symphony Orchestra.

Flutist Jessica Peek Sherwood and pianist Whitehead returned to perform “Light on Water” (2012) by Rand Steiger, inspired by experiences in the Los Peñasquitos marsh near his home in San Diego. Interestingly, Steiger was the first composer to have music performed by Sonic Generator, when his “13 Loops” opened the group’s debut concert in 2006.

Randall Woolf’s “Gandharba’s Song,” with video by Mary Harron and John C. Walsh, was performed by Helen Kim and a fixed media audio track based upon a solo by Sarangi virtuoso Bharat Nepali. The music and video are about life in Katmandu, Nepal, and how ancient and modern culture constantly mix there.

The concert concluded with three selections from “Corpus Exquis” (“Exquisite Body”) by Daniel Wohl. Wohl is yet another composer who strives to close the gap between his background in classical composition and his collaborations within the electronic music scene. The videos allied to these excerpts seem a major factor in that. The video for the first excerpt, “Ouverture,” appears uncredited, so one wonders if it is Wohl’s own work. The other two excerpts featured videos by Yui Kugimiya (“323”) and by Andrew Steinmetz and Teddy Stern (“Cantus”).

Terminal West proved an excellent venue, perhaps the best alternative venue for this kind of performance in Atlanta’s Westside and Downtown scenes. It is spacious, well equipped with good sound and lighting, with respectably safe, well-lighted paid parking, and staff who observably know how to manage concert setup, operation and breakdown.

It is also pertinent that this was Sonic Generator’s first concert of the season. The simple answer of why, according to Tom Sherwood, the group’s co-artistic director and percussionist, was because of the lockout of the Atlanta Symphony musicians in the fall. Although Sonic Generator exists because of the support of Georgia Tech, Sherwood and some of the group’s other members earn their daily bread as ASO musicians.

“Between trying to find other sources of income, taking work in other cities or walking the picket line everyday, there just wasn’t the time or the will to put on any concerts,” says Sherwood. “We all decided we wanted to put on a concert when things started to get back to normal.”