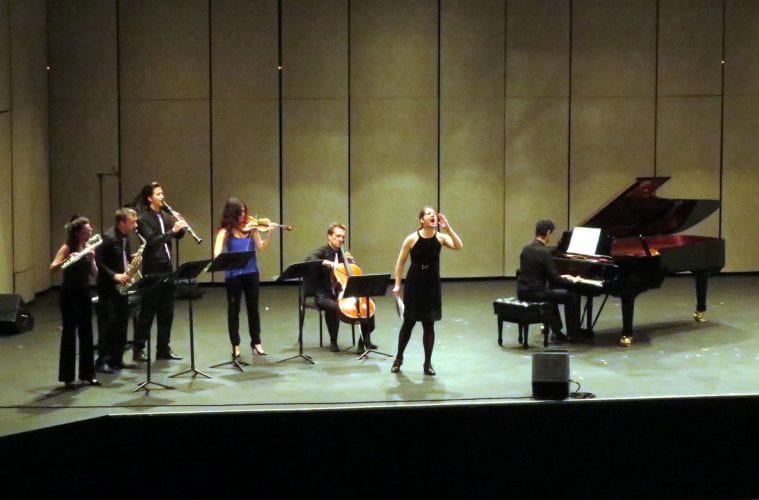 It was the concluding event of France-Atlanta 2015, the sixth iteration of an annual series of free and open events centered on innovation and designed to foster cooperation and exchange between France and the southeastern United States.

The concert opened with Ensemble Variances performing “Incessabili Voce” by Lisa Bielawa, commissioned for the group by Radio France and premiered by them in 2013 at l’Arsenal de Metz with the composer as vocal soloist.

Possessed of a bright and steady voice, the San Francisco-born Bielawa grew up in a musical environment, learning from an early age to play piano and violin, and to sing. (Her father is also a composer.) Bielawa got her undergraduate degree from Yale in English in 1990, then immediately moved to New York where she jumped back into a career in music. Two years later, she began to tour with the Philip Glass Ensemble, and considers Glass one of her influences as a composer.

The piece began with Bielawa singing alone onstage, with some faint instrumental sounds heard from offstage, then the instrumentalists slowly made their entrances.

Bielawa’s sources for her text included the Te Deum from the Liber Usualis, a scene from Anabasis by the ancient Greek soldier-historian Xenophon and a section of Heinrich Heine’s “The North Sea,” which meditates upon that scene. In performance, she expounded upon them not only vocally, but also in a semi-staged manner where she addressed the other musicians. In the end, she was left alone onstage as the musicians retreated, with sounds from a second backstage piano a distant companion to her solitary voice.

Ensemble Variances followed up with “Les machines désirantes” (“Desiring machines”) by its own Thierry Pécou. Just as much of the instrumental parts of Bielawa’s piece seemed in response to her voice, in Pécou’s work they seemed primarily to emerge and feed off his piano part, in the manner of a chamber concertino.

The musically challenging work was premiered at the Arsenal as part of the 2009 Festival Présences de Radio France. This was the most challenging work on the program for the listener as well, its frequent angular spikiness pressing the emotional edge, its screamy climax at the end followed by a brief, quieter final phrase.

Sonic Generator then took the stage to perform “to wALk Or ruN in weEst harlem” (2008) by percussionist Andy Akiho, written for the 2008 Bang on a Can Summer Music Festival. Scored for a modified Pierrot ensemble with a prepared vibraphone and drum set, it comes across as a seven-minute fusion of minimalist sense and funky jazz sensibility, very New York in character — as obviated by the title.

Both ensembles came together to perform the final work of the program, Double Sextet (2007) by Steve Reich. The piece won Reich the 2009 Pulitzer Prize for Music. In three movements played without pause (fast, slow, fast), it is scored for a pair of sextets comprised of flute, clarinet, violin, cello, vibraphone and piano — conveniently matching the combined instrumental forces of Sonic Generator and Ensemble Variances.

Characteristic of Reich’s music, it is a rhythmically driven work, the pianos and vibraphone parts bearing most of the responsibility for that forward-leaning momentum, especially interlocking piano rhythms that appear throughout and give the impression of a constant underlying eighth-note pulse. It proved an energetic, satisfyingly full-bodied conclusion to the concert.