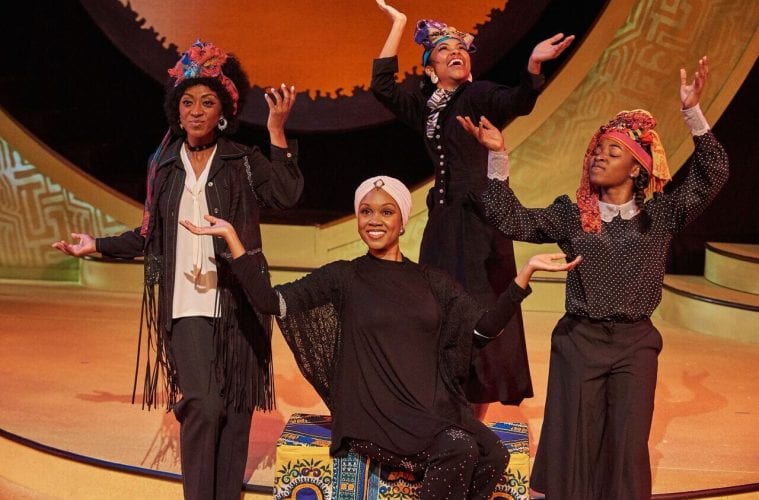 Review: “Simply Simone” confirms that Nina Simone’s life is not so simple to convey

Can the spirit of Nina Simone be adequately captured and conveyed in a musical revue? The answer, based on the current production of Simply Simone at Theatrical Outfit through April 15, I’d say is partly yes, mostly no.

Four women — Marliss Amiea, Tina Fears, Chani Maisonet and Chelsea Reynolds, backed by a strong three-piece jazz ensemble — each in costume vaguely representing Simone at a different point in her life, all of them appearing on stage together throughout the show, perform as the High Priestess of Soul, giving us a long monologue about her life interspersed with songs from throughout her career.

Simone’s life often makes for surprisingly good stage drama, and though her songs were rarely directly autobiographical, they’re placed in such a way that they help tell the story of her emotional and spiritual evolution: the story of her girlhood in segregated Trianon, North Carolina, her training to be a concert pianist, her painful rejection from the Curtis Institute which haunted her throughout her life, her adoption of the stage name Nina Simone, her change from jazz singer to protest singer, her troubled relationships with men and her long, globe-spanning search for a peaceful life all get memorable telling here.

But almost more than any other singer, Simone’s singular style and haunting voice stamped each song she sang as her own. Performing a single Nina Simone song would be an enormous challenge for any artist, and here the cast takes on more than 30 of her signature tunes. The number of successes is remarkable, but the evening has its share of misses: Fears’ “I Put a Spell on You” is a standout, and there are others, but “Strange Fruit,” “Black is the Color,” “The Look of Love” and many others may inevitably fall short for Simone fans. (Strangely, “Why? (The King of Love is Dead)” about the death of Dr. Martin Luther King, Jr., which has never stood out for me as an especially great Nina Simone track in spite of its moving and historical subject, gets a wonderful, soulful and beautiful rendition here).

Since four women play Simone in the show, it’s especially surprising that “Four Women,” one of Simone’s signature works — seemingly a crucial, defining element of her mysterious stage persona, a song she wrote herself though she more often covered other composers’ work — is omitted.

The show sounds best when the voices of the cast combine in harmony, perhaps because a listener unavoidably compares solo voices to Simone’s phrasing and style on recorded tracks, so it’s easier to understand combined voices as interpretation. But it’s something that happens too seldom. We hear solos, sometimes with other cast members singing backup, and there’s an occasional full ensemble but too few duets and trios, which would have given more texture and variety to the music. On a similar note, the performers represent Simone at various points in her life, but they’re all young women; literal age differences would have brought more authenticity and resonance to the device.

Patdro Harris’ choreography and stage direction are too busy, melodramatic and theatrical for the reserved and mysterious subject. Simone wasn’t just a singer, she was also a pianist — she thought of herself not as a jazz musician or popular singer but as a classical pianist who played music with pop and African influences. Considering the centrality of the instrument, I wasn’t a fan of having band conductor and pianist Chika Kaba Ma’atunde play an electronic keyboard in place of an actual piano. The expense and trouble of having a real instrument on stage would have been worthwhile, and having the singers pantomime piano-playing on some of the numbers looks as silly as it sounds.

Dramas based on the lives of artists often tend to err in one of two directions: most dwell far too much on trouble and dissipation, but a few tread too lightly and give a neater picture than what the messy reality actually contained. Simply Simone ends up glossing over the mental health issues that plagued Simone later in life.

Moreover, the play has a spirit, perhaps inherent to musical theater, of earnestness, confessionality and eagerness-to-please, all of which seem at odds with the defiant and idiosyncratic Simone. One of Simone’s most compelling and memorable qualities — one hears it in each song, as well as across her enormous catalog — is a resistance to, even a constitutional abhorrence of, easy categorization. A listener instantly and viscerally understands the emotional content of a Simone song, but reduction of any kind was seemingly her sworn enemy. It’s somewhat unsurprising, then, that a musical based on her life — despite its several soaring moments — should inevitably fall short of delivering a wholly satisfying picture of such an elusive, captivating but defiantly hard-to-capture subject.