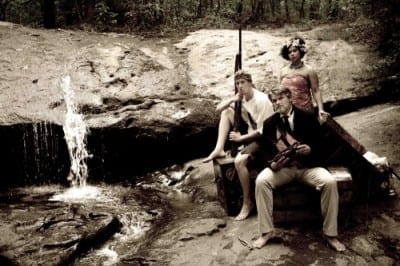 Review: “Shipwrecked!,” a full-sail adventure with a magic touch, at Serenbe Playhouse

A complimentary shot of golden rum for everyone in the house! A sing-along of sea chanteys including the immortal “What Will We Do With a Drunken Sailor?” Gentle rain falling at the precise moment our long-winded hero talks about crying real tears.

Welcome to Donald Margulies’ “Shipwrecked!,” a 19th-century adventure story loosely based on a historical figure and clearly influenced by Shakespeare, Twain, Dickens and Darwin. The rummy sing-along is the handiwork of director Brian Clowdus, who stages this carnival-style “entertainment” about a maritime hero and his incredible tale of diving for pearls, riding astride giant sea turtles and falling in love with a beautiful aborigine.

And the raindrops, well, that’s just another unscripted detail on a typical night at Serenbe Playhouse, where Clowdus’ resident ensemble is winding up its second season of site-specific performances with “Shipwrecked! An Entertainment: The Amazing Adventures of Louis de Rougement (As Told by Himself).” While the show is designed with low-tech sound effects made with ordinary objects, Nature frequently adds commentary of her own in the form of thunder, birdsongs, Georgia heat or mosquitoes. Nothing if not charming, “Shipwrecked!” is inventively staged, frequently beautiful, occasionally magical and, by the end of the night, a tad too long for its own good. Framed by the simple sheds that normally hold the baked goods, flowers and vegetables of the Serenbe farmers’ market and starring Atlanta actor Mark Kincaid (at left) in the role of the rogue storyteller, it continues through August 27.

“Shipwrecked!” is a classical romance that invites us to imagine a clash between Ovid and Jules Verne. But only a vagabond wit like Louis de Rougement could invent flying wombats, ride on the back of giant turtles and live to tell the tale in a blaze of celebrity and ignominy.

Kincaid begins the piece with some of the finest detail work I’ve ever seen him muster, and he dominates the show. “Shipwrecked!” also features the sparrow-throated Minka Wiltz, the nimble Will Shuler and the quick-changing trio of Michael Kutner, Renita James and Patrick Donohue — all five in a variety of roles.

As good as Kincaid is, he loses energy as we sail through chapter after chapter. With a face of pure rubber and a piercing, angelic voice that rings in the night, Wiltz is a marvelously expressive performer. She plays de Rougement’s mother, his salty sea captain and the exotic aboriginal beauty who enchants and ultimately marries him. Shuler, who also serves as music director for Serenbe’s musicals and cabaret series, is a performer whose spirits never flag; his take on de Rougement’s loyal, shaggy dog, Bruno, is a delightful romp all on its own and underscores how this giddy comedy could work as a show for families and children (perhaps with a bit of  a trim). Alas, Saturday night’s performance was delayed by technical problems. Eventually the show went on, under the footlights, no worse for the wear but without the sophisticated lighting cues that normally add to Margulies’ meditation on truth, time and love. Like the pearls that the sea-goers plop into pickle jars, the story heaps one fantastic image on top of another, from a man-eating octopus to cannibalistic islanders. This is de Rougement’s playhouse of the imagination.

As a study of soul-mating and the comings and goings of a seasick heart, “Shipwrecked!” evinces images of great emotional sweep. A peripatetic, homesick soul says goodbye to his wife. Then, like a lost sailor come back from his watery slumber, he causes his old mother to think she is hallucinating, or dead. Tears, saltwater, rain. Joy, sorrow, rapture. It all comes together in a couple of hours of almost pure liquid magic.