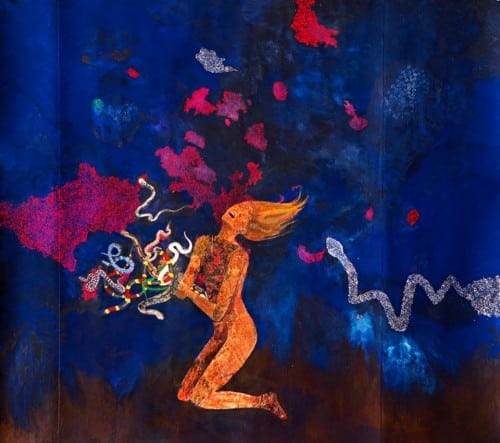 Review: Shana Robbins puzzles us as she peers “Into This World” at Beep Beep Gallery

Shana Robbins allows herself a horrendous pun in the subtitle of “Into This World: Shanamisms,” at Beep Beep Gallery through June 15. She has earned the right to it. Anthropologists who study shamanism say they practice “participant observation,” taking part while keeping a personal distance; Robbins has simply participated, and made shamanic practice her own through encounters that range from residencies with the women weavers of the Shipibo people of Peru to an artistic collaboration with Bear Paw, the Lakota Sioux great-grandson of Geronimo.

Her elliptical artist’s statement tells us that this resonant but puzzling exhibition derives from “shamanic worldviews” as what she mysteriously calls “a counter-intelligence, anti-dote, and aesthetic,” but she gives no details of the “practices, rituals, and earth-based cosmologies” that have given rise to the work. And that makes this show something like a museum display without wall text, an object-based survey of “shanamism” without much data on its namesake practitioner.

This hybrid form, an art show intended to communicate meaning, creates difficulties for viewers. It’s hard to imagine what someone with no idea of Robbins’ artistic history would make of this combination of laconically labeled drawings, textiles and video, along with figurines and what look like ritual-based installations that are  completely unlabeled.

It is left up to viewers to make sense of such things as a glass-walled coffin filled with earth and living plants, or a piece of Shipibo embroidery weighted down by large crystals. How the textile’s sacred geometry correlates with the crystals and geodes surrounding it is as much a mystery as the “Ceremonial Power Drum” hanging in the back gallery, the result of the collaboration with Bear Paw.

On the walls flanking the installations in the front gallery, recently made mixed-media works on paper contain such images as the naked artist surrounded by a vast array of birds in “Pájara,” where she also sprouts an extra, goddess-like pair of arms. Another self-portrait of Robbins shows her about to ingest a Cosmic Rainbow Serpent in “Swallow the Snake Who Swallows Herself.” Several spiritual traditions are invoked simultaneously here, and viewers have no choice but to intuit what they have to do with one another.

Even those who know that Robbins’ real experiences underpin every one of these images may find it hard to follow the meaning of it all.

The most visually unified and aesthetically compelling piece in the show is the video “Into This World,” in which the artist appears fully integrated into the spiritual rhythms exemplified by the abundant wildlife of the Peruvian rain forest. Accompanied by a hypnotic musical soundtrack, the imagery suggests a succession of gentle, accommodating natural cycles.

There are none of the fearsome aspects of shamanism that were shown in Rebecca Stone’s Carlos Museum exhibition last autumn. The jungle’s more ferocious or threatening creatures, however, do put in an appearance as sculptural figures on adjacent gallery shelves, possibly implying a deliberate separation of categories.

This is an interesting show to see installed on a city block so estranged from the world of nature that even the Christian cross on the church property across the street is made from industrial steel. If one grants Robbins’ insistence that these artworks address the issues that surround the knowledge that “how we skillfully engage our elements — science, art, politics, spirit — determines our horizon of meaning,” how does this exhibition help us to alter that horizon?

Some traditions attest that we can find our real selves in the middle of urban grittiness as readily as in the rain forest. Is this show meant to offer a similar path, mixing mirrors and crystals with visionary embroidery so that we can realize our true nature in the world of nature even when there isn’t an actual bird, much less jaguar, in sight? Its message, Robbins says, is that “We too are indigenous to the planet,” and that might imply that culture is just as much a part of nature as the rest of the world around us: urban ugliness is also a potential mode of revelation.

Robbins, however, means quite the opposite: that our ugliness derives from our alienation from our true grounding in a world of nature that is magically transcendent in its own right. Until we awaken to our true identity as an intrinsic part of a web of life that spills over into the light and energy of the cosmos itself, we shall never know our full possibilities as human beings.

This is made clear by Robbins’ explanation of the “Eco-Spiritual Eroticism” that she names in the title of one of her drawings, an explanation that isn’t included in the exhibition itself: “The sensuous flesh of the earth makes material my physical and spiritual experience on this planet. A resurrection through fluidity and release. A co-mingling with the wild, tactile gestures of the land. Life-affirming interactions with the environment.”

Whether instruments such as this exhibition can make those experiences into immediate realities for folks stuck in the alienated city is a question worth pondering. Robbins intends for this work to bring us to what she describes, obscurely, as “the immediacy of the moment and the variable emergent forces that circulate in the name of love,” but whether it succeeds in doing this depends on the inner readiness of those who encounter it.

Anyone looking for conventional aesthetics of compositional balance is unlikely to be seduced by this wildly inconsistent blend of visual dynamics. Except for the Shipibo textile itself and the enchantingly composed video, “beauty” in the sense of pleasure-giving harmony is not a word that comes to mind on first encounter with the clashing symbols of “Into This World: Shanamisms.”

Perhaps the inconsistencies are the only way of reproducing the potentially disturbing flux of “wild, tactile gestures” without actually going out into nature itself. But the sufficiently disordered soul may feel faintly claustrophobic amid such a profusion in the cramped environs of Beep Beep.