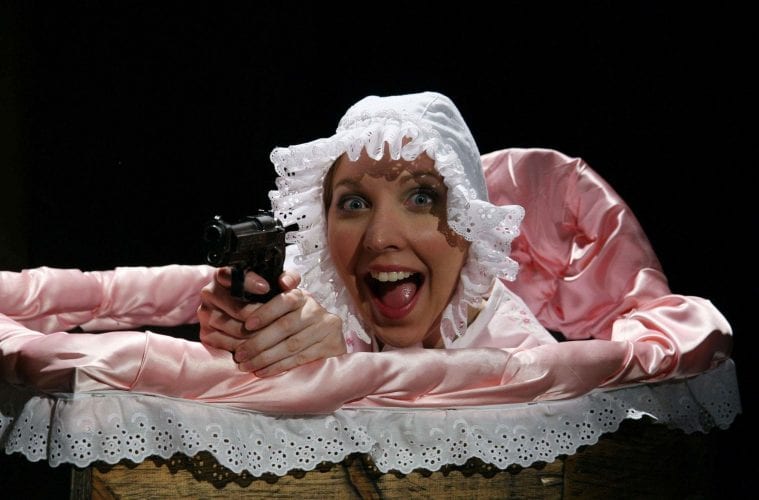 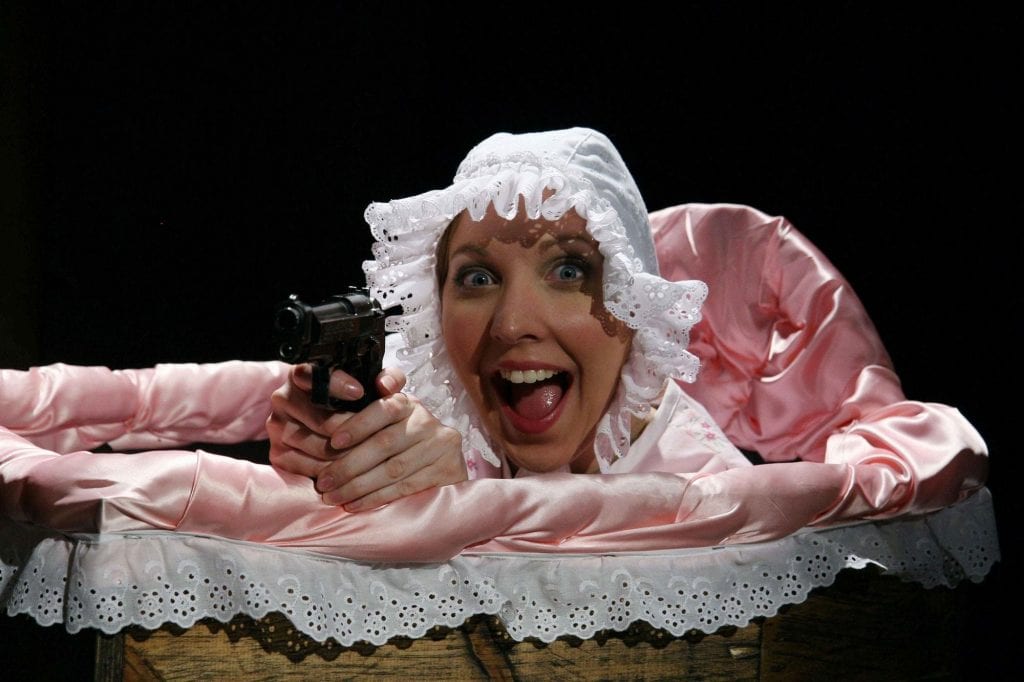 There's a surprise at every turn in New American Shakespeare Tavern's "The Canterbury Tales." (Photo by Jeff Watkins)

“Whan that Aprille with his shoures soote / The droghte of Marche hath perced to the roote,” the beginning of “The Canterbury Tales,” is probably, at most, all that most of us remember of Geoffrey Chaucer’s Middle English classic. Though the work is a lively, funny collection of stories expounding on the folly of human nature, its challenging, often incomprehensible vocabulary — not to mention its painful associations with high school recitations and midterm exams — might scare off some people from attending a theatrical adaptation.

That would be a pity, because the New American Shakespeare Tavern‘s version, playing through May 27, is an accessible, energetic and appealing take on Chaucer’s bawdiest tales. Your English teacher might not approve of some of the liberties taken, but Chaucer probably would.

Director and adapter John Stevens keeps Chaucer’s rhyming couplets but transposes the stories into a contemporary vernacular. We’re in a mash-up time period: part present day, part medieval England. These pilgrims hop on a tour bus as they wend their way to Canterbury, and the medieval tropes become contemporary types. The Pardoner is a snake oil-selling evangelical preacher, the Merchant is a loutish American businessman, the Wife of Bath is a sexy divorcee, and the Miller is a party animal. Six of Chaucer’s “nyne and twenty” pilgrims tell six tales, and each takes on multiple roles within the stories.

A bit of seat-of-the-pants, “Saturday Night Live”-style inventiveness pervades the goings-on. Sight gags, silly accents, stick puppets, disco songs and movie references may not have been part of your high school English class, but they fly fast and furious here. The whole thing develops a rowdy sense of fun, which matches Chaucer’s famous earthiness, especially evident in the Nun’s Tale as the arrogant rooster Chanticleer becomes a cockily strutting disco Lothario, who ends up telling a tale of his own.

Stevens primarily sticks to the bawdy tales of marital infidelity, and Chaucer’s understanding of human nature comes through: he understands how a woman’s drive for independence and autonomy — limned sympathetically, even lauded, in one tale — can become the catalyst for infidelity, selfishness or foolishness. A man’s understandable desire to ensure his wife’s faithfulness can become his own undoing when it becomes his obsession.

Though beer cans and tour buses may not have made appearances in Chaucer’s text, the overarching spirit of the stories comes through, and the narrative is always crystal clear. The atmosphere of lusty maids, taverns, hypocritical priests and duplicitous brides remains intact, even if none of them really said “Whatever!” in an adolescent huff or rounded out a rhyming couplet with “two for one.”

While we keep macro-Chaucer, we do lose some of the micro. Those longing to hear some of his language or to feel the Middle Ages wafting from the stage in every scene may be disappointed. It’s also surprising that the cast, for all its speed and energy, covers only six of the tales. The show clocks in at a longish two and a half hours; cumulatively we spend a bit too long in each story.

But in the end, though details may diverge from Chaucer and the tales may wend a little long on their way to Canterbury, the spirit of the thing remains refreshingly present, and we’re left with a lively, funny take on this classic of English literature. Only the most bitter and meanest of English teachers would complain.