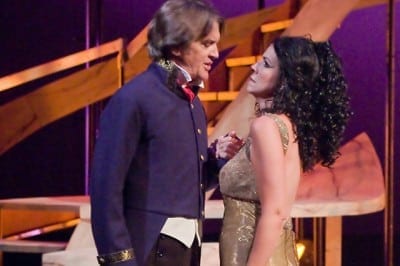 Review: Sex, power and a new adaptation of “Antony and Cleopatra” at Georgia Shakespeare

Shakespeare’s description of Cleopatra floating down the Nile is one of the most voluptuous and image-clotted passages in English literature. As narrated by Antony’s follower Enobarbus, it’s a shimmering barge of silver oars, purple sails, “pretty dimpled boys, like smiling cupids” and perfume so thick it makes the air lovesick.

Thirty years after encountering this gorgeously baroque passage from “Antony and Cleopatra” as an undergraduate, I still get drunk hearing it. It’s a Jessye Norman aria, or a softly pornographic Caravaggio painting, told in verse. It’s the Western male rendered powerless by an African sex goddess. It anticipates Keats’ “To Autumn” — and Elizabeth Bishop summoning Marianne Moore across the “cut-glass epergnes” of the East River (“Invitation to Miss Marianne Moore”). Normally, we are required to wait until Act 2, Scene 2 of the long-winded, three-hour tragedy to hear this shimmering meditation. We have to flit from Alexandria to Rome to Alexandria to Messina and back again to Rome. (Insert the winded breathing of a fleet-footed messenger boy here.) Thankfully, this is not how it plays in Amlin Gray’s new adaptation of the Bard’s immortal tale, which opened over the weekend at Georgia Shakespeare. Directed by John Dillon and running in repertory with “The Tempest,” Gray’s “Antony and Cleopatra” will run through July 22 at the theater on the Oglethorpe University campus.

Gray’s restructuring smartly plucks Enobarbus’ narration from deep within the text, juxtaposing it with a diaphanous bedroom scene and captivating us early on, even if it doesn’t quite rescue us from the longueurs of the 44-scene epic.

Richard Garner, Georgia Shakespeare’s producing artistic director, has always been a man in love with spectacle and design — if not, as he has told me, with the structure of “Antony and Cleopatra.” This season so far, his theater given us a Caliban who looks like one of Michelangelo’s doomed, gnashing figures from the Sistine Chapel ceiling. Now Georgia Shakespeare’s designers are referencing everything from Ingres to Morris Lapidus.

While Cleopatra (the regal Tess Malis Kincaid) struts around in gold cobra headdresses, flowing sheaths and a ’70s-style Elizabeth Taylor hairdo that is a little bit bouffant and a lotta cascading curls, costume designer Sydney Roberts imagines Octavius (Joe Knezevich) and his boys in the red, gold and white Neoclassical finery of Napoleon’s Caesar-centric France. Set designer Kat Conley, for her part, pictures these colliding ancient worlds as an all-purpose pair of curvaceous twin staircases straight out of Lapidus’ Art Deco Miami. Cleopatra at the Fontainebleau? May sound like a mess. But it kinda works.

Responsible in seasons past for elegant, elegiac treatments of “Coriolanus,” “Hamlet” and the “Antony and Cleopatra” prequel, “Julius Caesar,” Dillon here delivers opulent tragedy laced with occasional glimmers of comedy. The scene in which Cleo lacerates the messenger who brings disagreeable news from Rome is a humdinger, as is the eleventh-hour business involving an asp bearer (Scott Warren) who speaks of the “pleasures of the worm” with the accent of a James Bond villain. He seems to have wandered in from another play. But so what? He’s very funny.

In a couple of brief sequences that seem to occur on the edge of a hallucination, Carolyn Cook conjures up a soothsayer in lugubrious veils and dark-circled eyes. She is quietly spellbinding. Knezevich is remarkable as the charismatic emperor who weeps when his sister, Octavia (the lovely Ann Marie Gideon), decamps with Antony (Chris Kayser). Appearing on the battlefield in bolts of scarlet fabric, Knezevich looks every inch the warrior god, complete in his sartorial apotheosis. Knezevich may fit the age profile of Octavius (Julius Caesar’s hand-picked protégé) and Kayser that of Antony, but you can’t help but wonder if there might have been more fireworks between the titular lovers had the casting been reserved. Kayser is OK as Antony, but I’m not really feeling it. Dillon also might have done a better job of coaxing audible lines from some of the younger performers.

As a woman of infinite variety and insatiable lust, Kincaid gives a smartly drawn performance. Would “Antony and Cleopatra” be a stronger play if we had some inkling what this creature was like when the mask came off? Probably. But psychological introspection is work better left to the novelist. Cleopatra is a female character of singular, incandescent brightness. She is Rome’s death kiss.

As an attempt to streamline a flawed and meandering story, this production takes off like a rocket to the moon. By that definition, it is virtually guaranteed to sputter out. But when Enobarbus (the eloquent Allan Edwards) describes the African queen’s burnished throne burning on the water, and the flat surface of the stage beacons and sparkles like the Nile, we are moved to some place outside space and time. Such pretty, pretty words — that’s all this is, really. But for a minute or two, it is enough.