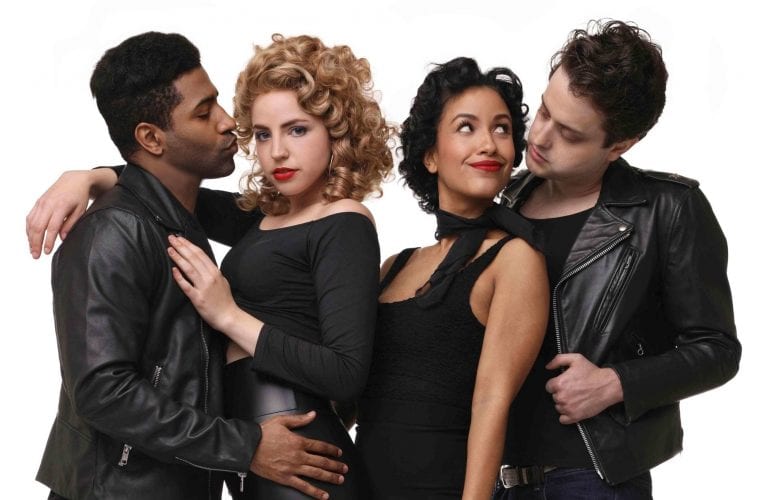 Review: Serenbe’s version of “Grease” is hopelessly devoted but never quite catches fire

Never one to stage a production without imprinting his own brand of theatrical derring-do, Brian Clowdus and his Serenbe Playhouse colleagues have turned their attention to leather jackets and poodle skirts for an interpretation of Grease. Running through April 16 at Serenbe Playhouse, it’s the kind of immersive, imaginative event the company is known for, but this outing isn’t nearly as sumptuous as previous Serenbe musicals.

The 1978 film version with John Travolta and Olivia Newton-John remains one of the most popular movie musicals of all time. Clowdus has staged the original version of the 1971 musical, which — song-wise — is something of a different beast. It doesn’t include many of the numbers that the film version successfully added. Nonetheless, Clowdus has added the likes of the titular “Grease,” “Hopelessly Devoted to You,” “Sandy” and “You’re the One That I Want” to round out the song list.

Its central characters are familiar to most by now — Danny Zuko (Michael Stiggers Jr.) and Sandy Dumbrowski (Randi Garza), who meet over a late-1950s summer and have a romance. When they are later reunited at Rydell High, Danny — leader of the T-Birds — is a different type altogether. Other characters include Jeremiah Parker Hobbs as Danny’s friend Keneckie, Julissa Sabino as tough as nails Rizzo, the leader of the Pink Ladies, and Shelli Delgado as Frenchy, who is looking to drop out of high school and become a beautician.

Local radio personality Brian Moote of Q100 is scheduled for the role of Teen Angel on certain nights — not on the night I attended, however — and the ensemble also includes TV journalist Paul Milliken as Vince Fontaine. Unlike previous versions, Clowdus has given this a twist by employing a racially mixed cast. It’s not really any kind of stunt casting, either. Rydell High just seems to be a school welcoming of all races and nationalities.

Scenic designer Lee Maples has built a drive-in for this production — complete with a giant movie screen and a nearby concession stand. Vintage cars are also (at times) onstage and in front of the bleachers. It’s a wonderfully nostalgic, atmospheric touch.

As directed by Clowdus, though, this version isn’t nearly as enjoyable as it could be. Like last spring’s version of Carousel at Serenbe, what surrounds the performers is ultimately more interesting than anything on stage. The show feels flat at times. Clowdus’ Miss Saigon nearly swept the Suzi Awards last year, and his works are bold and reimagined. But while the helicopter landing might have generated a lot of the press for that production, what sold the show were the performances and its inspired numbers. That’s not the case here.

Stiggers is talented — he was part of a superb ensemble in Horizon Theatre’s The Toxic Avenger (2016). Yet aside from the impressive vocal range he shows, including a nice take of “Sandy,” he doesn’t have much presence in this production when he isn’t singing. Garza has more success, but the straight-laced character of Sandy takes away a lot of her natural charisma. The role boxes her in at times, which is a shame. She really only gets to let loose with the climatic “You’re the One that I Want.” Worse, Stiggers and Garza have no romantic or sexual chemistry at all between them. They’re like strangers onstage together.

Much more palpable is the interaction between Hobbs and Sabino, partners in real life. Sabino, in particular, is wonderful. Her “Look at Me, I’m Sandra Dee” is rushed a bit, but her take of “There Are Worse Things I Could Do” is a beauty. Also a standout is India Tyree as Jan.

The numbers, overall, are hit or miss. “Summer Nights” and “Born to Hand-Jive” are both a lot of fun. The latter, employing choreography by Bubba Carr, feels snappy and alive, yet other numbers such as “Greased Lightning” and “Beauty School Dropout” are less triumphant. The show uses a lot of video projections by Bradley Bergeron, intertwined with the onstage action, and somehow the two components don’t work as tightly as they should.

As always, the technical details of the production are fine, including the costumes by Brandon McWilliams. Grease — as an experience — is a decent enough night out, but it’s not Serenbe at its sharpest. It’s terrific at times and wan at others. Given Clowdus’ high standards, and the strong local theater year it’s proven to be already, Grease feels a little lightweight.