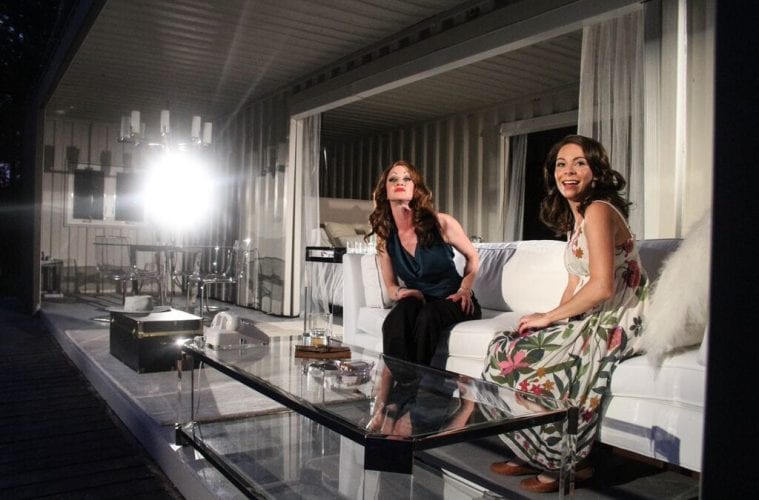 Blanche DuBois famously arrives on stage along with her trunk, a potent indicator of the character’s unfixed, desperate situation. Appropriately enough, in a capable production currently running at Serenbe Playhouse through June 28, the place she’s arriving at sits inside a shipping container.

Director Brian Clowdus takes a cinematic approach to the classic work. Though it is a play, there’s lots of additional incidental music, the costumes and set are very slick and film-like, and the dimensions of the shipping container are even the dimensions of a movie screen. It works well for the most part, but it’s occasionally cheesy, as cinematic effects can often be when they’re placed on the stage.

Ann Marie Gideon is a real standout as Stella, a role that’s hard to stand out in. Stella is a character it would be easy to play as a passive victim, dreamily following her husband, Stanley, because she’s so lost in love and has few other options. But Gideon plays her instead, correctly I think, as a strong, independent woman, knowingly, consciously and happily making the decision to stay with Stanley because she knows it’s exactly what she wants.

Television star Matthew Davis does a competent job with the difficult, if not nearly impossible, task of playing Stanley; he perfectly captures the character’s pragmatic self-regard, but the real swagger and threat remain too small.

Deb Bowman makes a lovely Blanche. She captures the character’s capable charm and existential longing for a world that’s as romantic and lovely as the one in her mind, though the accent, clothing and mannerisms often seem too old-fashioned for the contemporary setting. There’s something much too abrupt and flat about Blanche’s final exit in this production, which is obviously a crucial moment of the show. The outdoor set inside a shipping container.

Though many of the production elements are contemporary, the nurse who arrives to take Blanche away is dressed in a way nurses haven’t been for ages — in a starched white hat and uniform — and there are other elements that don’t feel contemporary either, giving the show’s overall aesthetic a somewhat jumbled feel.

Shows at Serenbe are outdoors in inventive spots and viewers should understand before going that, depending on the weather, this one may allow you to experience the heat and humidity of a New Orleans evening first-hand. The parking lot is also rustic and dark, and the bathrooms, like Blanche’s trunk, are the portable kind. Still, Serenbe has created a solid and memorable Streetcar.