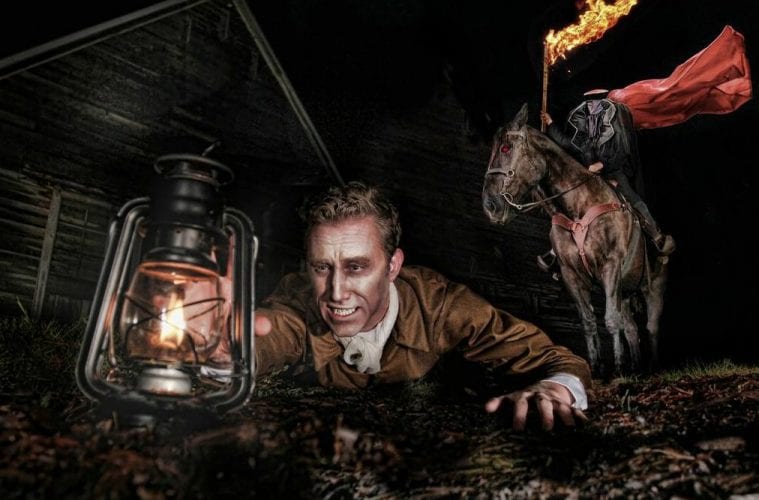 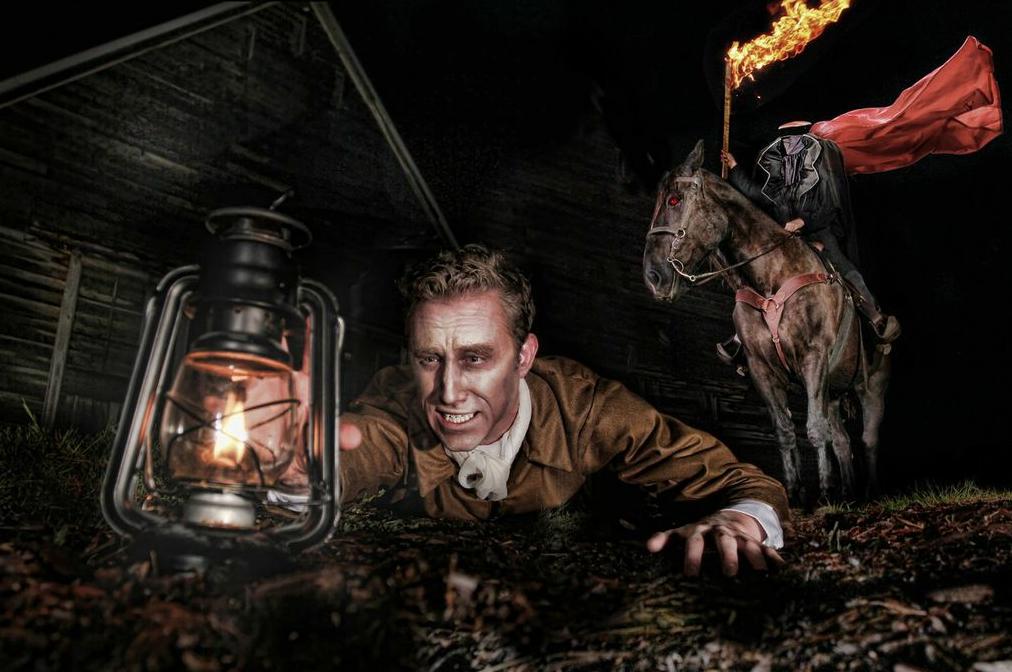 You’d have a hard time finding a Halloween show more fun than “The Sleepy Hollow Experience,” at Serenbe Playhouse through October 31. The “playhouse” in the name is something of a misnomer: the inventive company has no real physical address but instead stages its site-specific productions in various spots around the extensive Serenbe “new urbanism” development about 40 miles southwest of downtown Atlanta. Like its predecessors this summer, “The Velveteen Rabbit” and “Hair,” Serenbe’s first fall production is an innovative, visually compelling, solid theatrical experience.

Kathryn Schultz Miller’s adaptation sticks close to Washington Irving’s short story. In the haunting atmosphere of the glen of Sleepy Hollow in upstate New York in the late 18th century, the lanky, credulous new schoolteacher Ichabod Crane (Chris Mayers) and a strapping, prankish bully named Brom Bones (Jacob Cooper) are rivals for the love of Katrina Van Tassel (Jessica Miesel), the beautiful young daughter of a wealthy farm owner. Hovering over the story is the legend of the headless horseman, a spirit who haunts Sleepy Hollow at night searching for his lost head.

The production is staged in and around the Serenbe stables, inviting viewers to follow the action through various locations, and features a Headless Horseman on a live horse. Especially well done is the use of two storytelling narrators, Laura Floyd (recently profiled as one of our “30 Under 30” artists) and Brandon Connor Patrick. Like the cast of three main characters, they wear ghostly gothic makeup and interact, always in character, with viewers as they’re led through the story. The visuals are first rate, and the sound design by Jevares C. Myrick and Bobby Johnston, using speakers placed throughout the stable, is goosebump-level spooky.

The play seems to lose a bit of gas when we arrive at a Halloween party. Irving’s story isn’t a long one, and it’s not huge with incidents either; it often has the character of an atmospheric sketch more than a genuine “story.” The cast sings well — I especially liked the eerie, plaintive rendition of “Black Is the Color” sung by Ichabod and Katrina — but the songs and dances at the Halloween party start to feel like filler.

The original tale famously culminates in a chase on horseback, which obviously can’t be done theatrically. Here, Ichabod walks home from the party instead, which works out fine, though the extended chase on horseback is the lifeblood of the original and a scene about an encounter between a ghost on horseback and a man on foot must naturally be a relatively short one. The ending can feel abrupt, though the obviously crucial effect of the headless horseman is well done here and exciting.

Like its Serenbe Playhouse predecessors, “Sleepy Hollow” is an accomplished, professional work. It has a slightly sillier and less gory feeling than some of the big Halloween haunted houses around town, so it’s a great choice for children who aren’t old enough for those, and its literary origin and tight production values (and well-stocked bars in various scenes) mean that parents and other adults won’t feel bored or left out. Spooky, funny and splendidly lovely in a shuddery, eerie kind of way, chalk up another winner to Serenbe for “Sleepy Hollow.”