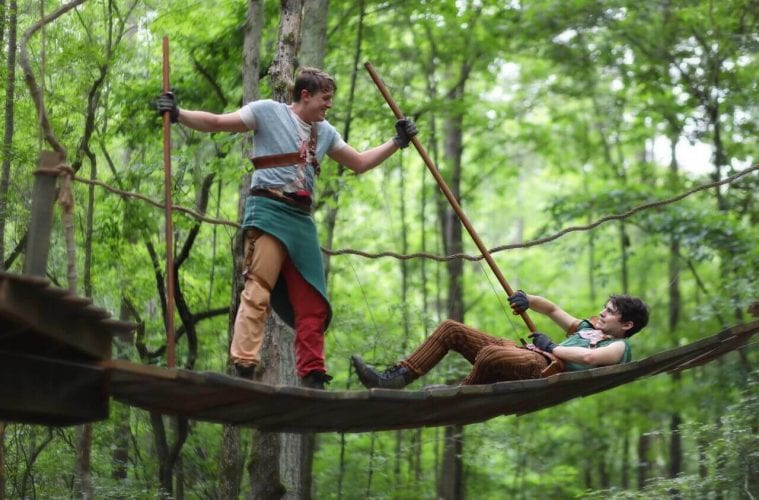 As we all know, Robin Hood steals from the rich and gives to the poor, but in Serenbe Playhouse’s new kid-centered production of the famous legend, he also zips through the trees. The company’s latest outdoor immersive show, running through August 13, offers a straightforward, appealing theatrical version of the classic tale that has the characters swooping around via zip line.

The setting is a series of tree fort-like wooden platforms and a swinging bridge in the woods behind the Farmer’s Market at Serenbe. Simply getting to the show — costumed characters help guide the way and even take your ticket — is a bit of a kick, and there are a number of activities and distractions for the kids, like an obstacle course through the woods and stockades for pictures before and after the performance.

The aerial business is the work of director and former Broadway performer Paul McGill, and the energetic young actors from Serenbe’s summer apprentice company perform all the roles. The stunts, though they don’t dazzle or thrill at the Cirque du Soleil level, are fun and well-integrated into the story (actually no small feat, that). There’s a long, high zip line that can bring characters into the performing area from behind the audience — Robin Hood’s entrance is particularly effective, as it should be — and there are also a couple smaller, lower zip lines that cross the stage area. 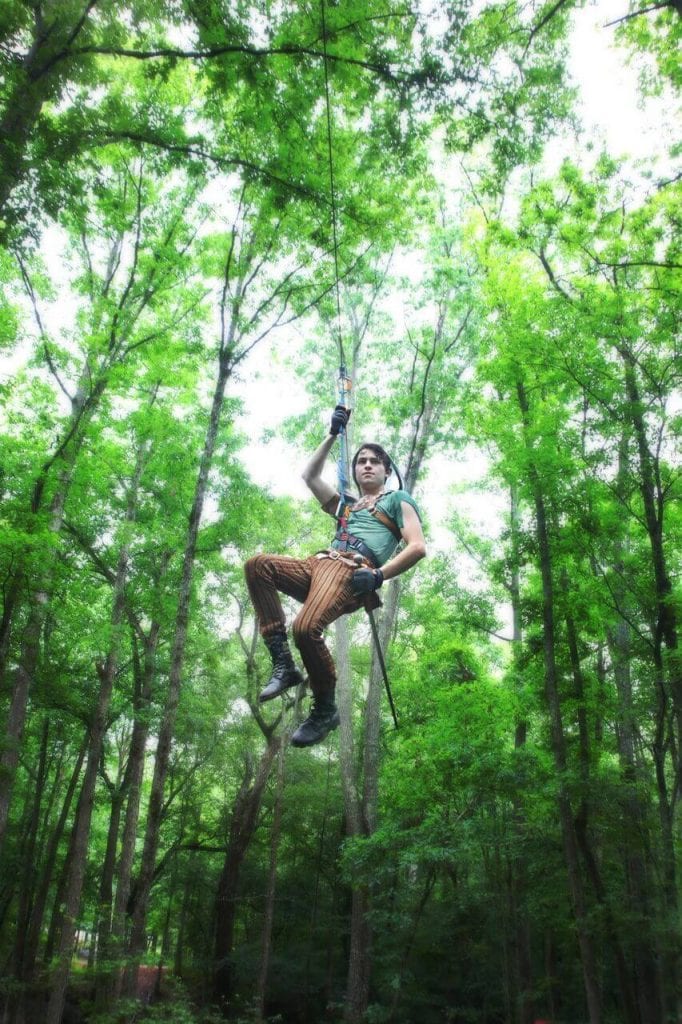 Rachel Teagle, the playwright behind Serenbe’s popular annual wintertime production of The Snow Queen, creates an adaptation that’s dutifully faithful to the spirit of the familiar tale, and also swiftly moving and entertaining, covering all the legend’s major incidents (you’ve probably forgotten you know them all, but there they are). Without being preachy or polemical, she also highlights some of the story’s interesting and timely themes about living under unjust rule or making moral decisions that seemingly contradict traditional notions of goodness and obedience.

Lead actor Jordan Patrick as Robin Hood delivers a performance that’s free of irony or condescension. There are dangers, which, though not as great as falling, are just as happily averted. Kenny Tran is a ludicrously vain Sheriff of Nottingham, a strategy that adds lots of fun humor to the show, but overall can take away the overarching sense of threat or danger. We can see from the very beginning that it’s only a matter of time before this Robin Hood teaches the preening bully a lesson, and as the plot complications mount or a character gives us her backstory, we often end up wondering when they’ll all just get back on those zip lines.

No matter. They do that soon enough, and with a couple songs, sword fights and all the classic elements of the timeless legend intact, this Robin Hood makes a visit to the Sherwood Forest a great stop for families this summer. The outdoor show could conceivably entertain kids of any age, but my guess is that Merry Men and Little Ladies of around the ages of four to eleven or thereabouts would appreciate the visit the most. (And if not, there are some stockades conveniently on hand). Still, Serenbe’s Robin Hood is so fleet and fun that, with any luck, those won’t be necessary.