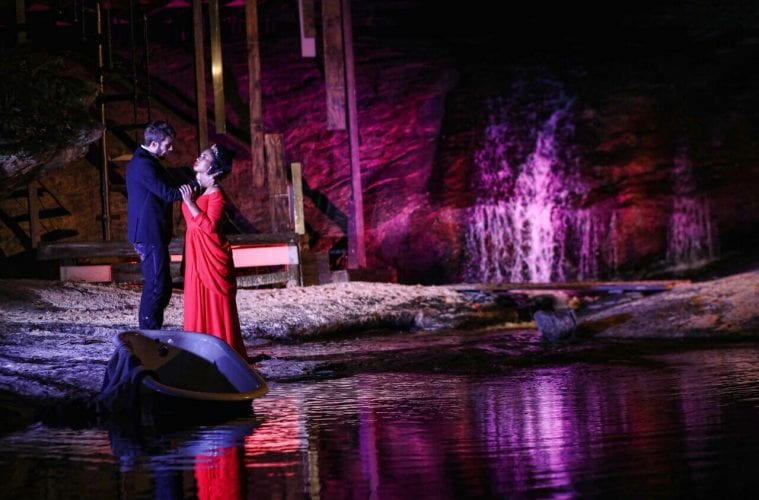 What happens when an elaborate, big-budget, outdoor production of Macbeth opens in perpetually dry, drought-ridden Georgia? The wettest summer in memory, of course, with evening after evening of show-canceling, diluvian rainfall. Even the non-superstitious among us might begin to speculate about the nature of the so-called curse, said to rear its ugly head whenever someone speaks the name of Mac — . . . um, Shakespeare’s Scottish play, that is.

Anyway, all cursing aside, on clear evenings, Serenbe Playhouse’s production, running through July 16, has a visually stunning outdoor setting, the banks of a creek deep in the woods at a spot where the waters tumble over an enormous granite outcropping. As night falls, the place develops a fittingly creepy Blair Witch feel, given eerie, almost supernatural life by John Burke’s effective score and Joel Coady’s haunting lighting effects.

Nature can spoil the party, sure, but she can also oblige. On the second night I came to see the show (the first having been canceled due to a sudden downpour), just as the murderous Macbeth and Lady Macbeth welcomed guests to Act III’s ill-fated banquet, a bat made its show business debut. It darted subtly into and out of the light just over the heads of the guilty hosts, eliciting gasps from the audience members who caught sight of it as it fluttered about, perfectly embodying the scene’s underlying themes of sinister dissimulation and impending doom. Work, bat.

In other words, nature’s contributions can be somewhat uneven, and overall, the show suffers a similar fate. There are stunningly effective moments, but others crash, and overall, the action — which in Macbeth should feel as though it’s happening in rapid, machine-gunfire bursts — has a strangely slow, unshakably sluggish feel to it in spite of the energy and speed of the performance.

Though the production is visually inventive, problems emerge in the show’s sound world. That waterfall may be lovely, but it’s also surprisingly loud and doesn’t know when to quit, and cicadas, also less instinctively professional than the bat, add to the din later in the evening. The setting requires the actors to be miked, but even so, balancing the sound elements proves difficult. There’s seldom a real sense of intimacy or sequestered contemplation in crucial scenes, and dialogue and speeches are delivered at a single volume and pitch — perhaps an effect of the amplified sound — but they often lack the texture and variety to make them dramatic.

Justin Deeley’s Macbeth has a tortured conscience and a killer set of abs, and the production employs Shakespeare’s text to expose one as much as the other. He and Maythinee Washington make an interestingly fleshy, lethally ambitious couple, and Washington delivers an especially fine, almost operatic, solo mad scene.

Director Amy Boyce Holtcamp reimagines the three Weird Sisters as shape-shifters. They can — we’re meant to imagine — transform themselves in an instant to resemble soldiers, banquet guests, assassins, anyone at all. There are no big costume or make-up changes, but the witches twitch and spasm as if they’re changing shape, and then they’re understood to be someone else. When messengers deliver bad news or functionaries arrive to do Macbeth’s bidding, they’re often the witches in disguise.

I liked the device, but then, as a critic, I’ve seen Macbeth a kajillion times. However, I could tell at intermission that more than a few viewers were utterly baffled by what was going on. I suspect ignorance of the plot of Macbeth was the primary culprit, but this device may also have been partly to blame. Like many of the show’s elements, the idea seems somehow more cinematic than theatrical, which may be why it falls short, or is even incomprehensible to some, in live performance.

In the end, for me, Serenbe’s Macbeth wasn’t a home run, but it also certainly wasn’t a totally cursed washout either. Its setting is certainly memorably inventive and evocative. And, of course, we now know the solution to Georgia’s long-standing drought: Macbeth every summer ’til we’re in the clear.