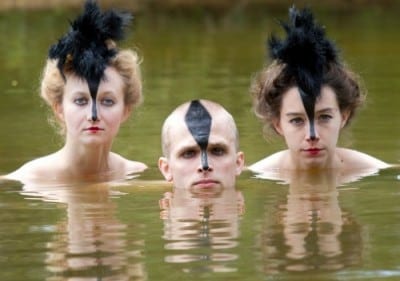 And the winner for this year’s best set design goes to — we have an upset here! — Mother Nature. Accepting the award for Ms. Nature is her assistant Brian Clowdus, founder and artistic director of Serenbe Playhouse.

Well, it looks like it’s going to take a moment for Clowdus to pull himself together. Word is that the jury was especially impressed by “The Ugly Duckling,” which the director situated on a pond hidden amidst the rolling green pastures and overgrown wildflower meadows that give the bucolic Serenbe community its verdant sheen. One committee member said the drive from Atlanta to the southside hamlet on a warm July afternoon read like the first sentence of the Hans Christian Andersen classic about the little outcast duck: “It was lovely summer weather in the country, and the golden corn, the green oats, and the haystacks piled up in the meadows looked beautiful.” Another was overjoyed to hear a chorus of live Serenbe ducks quacking in the background during the performance.

OK, it looks as if Serenbe Playhouse has taken the stage. Five, four, three, two, one … We’re live, folks. Rose Shields as a Swan, Andrew Crigler as the Ugly Duckling, Emma Kate Jackson as a Swan. (Photos by Loran Hygema)

You will forgive this self-indulgent little reverie, dear reader, if you are lucky enough to make a visit to Serenbe Playhouse this year. The year-old theater is already making a splash for its use of the latently theatrical natural environment of the Chattahoochee Hills township it calls home. Last season, Clowdus inaugurated Serenbe Playhouse with a delightful site-specific production of Kipling’s “The Jungle Book,” which unfolded around a treehouse deep in the forest, featuring Lady Gaga-style choreography and jungle creatures planted discreetly along a magical path. The current world-premiere production will run through August 28.

This year, Clowdus and choreographer Joanna Brooks employ Andersen’s tale of the tortured Ugly Duckling as a springboard for a feathery fantasia performed on a cross-shaped pier submerged just a few inches underwater. For this adaptation, audience members bring blankets and lawn chairs and sit on a grassy lakeside slope, where they watch the actors waddle, somersault and skip into view from the opposite bank. Inspired by the stoic manners, formal storytelling and austere beauty of Japan, Clowdus and costume designer Brandon R. McWilliams dress the narrator (the elegant and articulate Dasie Thames) in a kimono, the ducks in body-hugging sheaths and the wild swans in burgundy obis. Composer Chip Epsten contributes an evocative score of lovely string music that’s by turns somber and joyful. Playwright Rachel Teagle infuses her telling with lots of funny business, contemporary references and a streamlined trajectory of the journey of the Ugly Duckling (Andrew Crigler). Ugly encounters a gaggle of wild geese led by a showman named Captain Hooks, who claims to be the “loosest goose this side of the ’Hootch” (Will Shuler). Among Hooks’ entourage is a funny-talking Canadian named Alberta (Emma Jackson). Instead of spending time in the home of an old peasant woman with a hen and pussycat, Ugly is adopted by a snarky Cat (Ben Isabel) and Chicken (Jessica Miesel), loosely based on celebutantes Paris Hilton and Nicole Richie. Riffing on Hollywood’s penchant for odd baby names, the fashion terrors christen the duckling “Bookcase.” Naturally, they read him the riot act.

Clowdus has said he was moved to do this piece by the national conversation around bullying. Indeed, there is much talk here about Ugly “going through a phase,” something he’ll “grow out of.” Such are the code phrases that society uses to dismiss budding homosexual behavior. In the opening sequence, the narrator instructs us that nature is a mirror of life; when the water grows still, we can see our shapes in it. This story, then, is a reflection of the evanescence of life, a forever-shifting kaleidoscope of vanity, narcissism, shadows, light, trickery, transformation.

Some of the best work here is by Miesel. Teapot-shaped and primly expressive, she plays both the cluckish Mama Duck and the intimidating, easy-to-ruffle Chicken. In one funny moment, perhaps ad-libbed, her Chicken turns its tush up to the audience and clucks, “Does this outfit make my butt look big?” The moment when Mama Duck finally gives birth to her long-awaited hatchlings is particularly charming. The giddy chicks announce their arrival in a giddy burst of cartwheels, dips and quacks. Crigler’s Ugly Duckling — called Ted and sometimes TUD (The Ugly Duckling) by his mocking sibs Bill (Isabel) and Waddles (Rose Shields) — uses spasmodic tics to summon the vocabulary of an odd bird who can never fit in. Most of the time, Ted is an adorable mess. After so much struggle and defeat, he discovers his true self and triumphs in a wild-swan pas de trois. The show ends so happily that even the kimono-wearing narrator breaks down and joins in the fun, after first protesting that she really shouldn’t. So Japanese.

In staging theater on a canvas of water, sky and land, Serenbe Playhouse finds surprise and whimsy at every turn. Like any theatrical endeavor, it’s a marriage of artistry and administration. What makes it unique is the persistence of Nature. The payoff is in the unexpected. But aside from occasional flashes of diva behavior in the guise of sudden thunderstorms, soaring temperatures and buzzing insects, Nature is a generous and accommodating collaborator. Clowdus can’t tame her, but he sure is wise to claim her. At the end of the day, I just wish that Serenbe’s resident ensemble of ducks could waddle down and take a bow. These sleek gleeks quacked magically and never missed a cue.