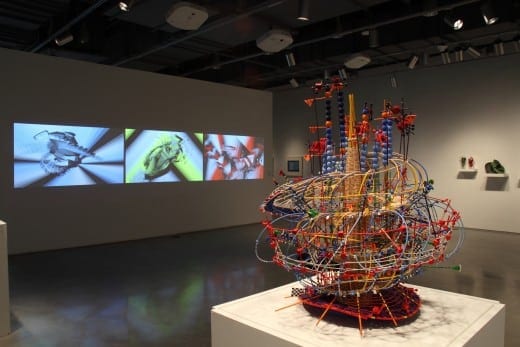 Review: Science and art intersect at creativity in “Laboratory,” at Zuckerman Museum Nathalie Miebach’s sculpture Hurricane Noel. Robert Flowers’ video Dynamism of a Figure No. 2 is in the background.

Laboratory: A Site for Exploration and Observation, at Kennesaw State University’s Zuckerman Museum of Art through February 21, invites us to examine the many ways creativity manifests itself across disciplines and time.

The exhibition is organized around the idea that these practitioners, whether artist or scientist, share an inherent need to solve a problem and that observation is at the heart of the investigation. The pairings of contemporary artistic practice with that of 19th-century and earlier scientific examination shows how similar, and sometimes interchangeable, the two can be.

In the accompanying brochure, quotes from Robert Hass, a poet who also writes beautiful prose about the natural world, and biologist/naturalist Edward O. Wilson provide a roadmap for navigating the exhibition. Wilson believes that the ideal scientist thinks like a poet. This exhibition suggests that both this idea and its obverse are true.

Science and poetry reach a beautiful nexus in the hands of Lauren Redniss, who created a visible book about invisible things: love and radioactivity. Scientists Marie Sklodowska and Pierre Curie fell in love while researching heat and magnetism. What could be more poetic than that? Their scientific journey, told as a love story, reads like poetry in Radioactive: Marie and Pierre Curie, A Tale of Love & Fallout, a finalist for the 2011 National Book Award. The self-illustrated book examines the Curies’ discovery of radium and polonium and their impact on the fields of nuclear energy and radiation.

Redniss — incidentally, a former student of Flowers’ — produced the artwork for the book using cyanotype, a cameraless photographic technique in which exposed paper turns the deep blue that perfectly captures Marie Curie’s own description of the moody “spontaneous luminosity” of radium.

Her book and its endpapers, enlarged and on view, find perfect pairing, visually at least, in the photograms of Anna Atkins, an English botanist and photographer who published her own book of cyanotypes in the mid-1800s, and whose work is represented here by a book of her photograms published by Aperture in 1985.

Another book, this one a delicate and worn palm-size journal with brown ink on yellowed pages, served as a record of the daily weather observed by Massachusetts resident W. F. Taylor in February 1812.It is a gentle companion and quiet counterpoint to the vibrant sculptures of Boston-based Nathalie Miebach.

Miebach delivers the most complex work of the exhibit in a many-layered representation of the intersection of art and science. Miebach would have been Wilson’s ideal scientist, one, he says, who “thinks like a poet and works like a bookkeeper.”

Using the methodologies of both disciplines, Miebach translates scientific data related to ecology, meteorology and climate change into three-dimensional structures. Made from colorful paper, plastic and wood, they seem to pulse atop their white pedestals.

Miebach interpreted data gathered during Hurricane Noel in 2007 to create both the sculptural shape of the eponymous piece, a visual tempest of color and energy, and the musical accompaniment; thus, you are hearing weather while listening to music. (Videos of TED talks by Redniss and Miebach are in the gallery’s entry.) Like Miebach, Hannah Israel used information as a form of abstraction to create Happy Happy Sad Sad (2014), a sculptural installation on the floor. Its white peaks and valleys, like white sand but actually flour, are a topographical map of her daily moods, which she graphed on a spreadsheet using statistical and numerical data.

Charles Darwin’s book The Expressions of Emotions in Man and Animal (1872) shares the twilight blue wall that backs Israel’s dramatically lit sculpture. Darwin was interested in the universality of expression in nature and was influenced by the work of French neurologist G. B. Duchenne de Boulogne, whose images of experiments with electrical stimulation of the facial muscles can be seen on the pages of the open book. (Duchenne’s work is noted in “Give Me a Smile,” an essay in the January 12 New Yorker.)

The work gathered here encompasses not only keen observation of what is visible but also visualization of the invisible. Former Atlantan Karen Rich Beall incorporates sculptural forms derived from microscopic plant and animal worlds to create abstracted and stylized versions that speak symbolically of ecological or environmental issues. Two of her three works here, made of wire, papier mâché and florist tape, are adapted from lichen that generally grow on tree branches. Here, they sprout from the walls of the gallery space like fantastic Spanish moss, or man-eating plants, seemingly sentient.

The third, Bubbling Up from Underneath (2014), a ceramic wall installation that looks like red molecules from chemistry models, actually represents a slime mold often found on decaying wood. It spreads across a brown wall, equal parts formulaic representation and luscious sprawl.

Beall’s work is paired with drawings by 17th-century English plant anatomist Nehemiah Drew, which he used to illustrate his lectures to the Royal Society in London.

Gallery materials identify Martin and Erik Demaine as “father-son math-art team.” They make sculptures that, in their words, “explore the power of folding paper along curved lines.” What that actually means is more difficult to describe, but at least in the work shown here, it involves shaping a circular sheet of paper into a three-dimensional object whose form is ultimately determined by the handmade, curved creases they make in that flat sheet of colored watercolor paper. (Think of a much more complicated and mathematical version of the pleated construction paper fans we made in kindergarten.)

Is this math? Is it art? We can see it both ways. Father Martin is a glassblower. Son Erik is a professor at MIT. They use these folded forms to “visualize unsolved problems in (unspecified) science.” Together they won a Guggenheim Fellowship in 2013 for exploration of similar folding of other materials, including hot glass. Their work is paired with illustrations of folded paper pieces by Bauhaus master Josef Albers, who used them to help students understand form, and a photo that captures Gustave Eiffel, a predecessor in precision and construction, experimenting with air resistance beneath the iconic tower that bears his name. Its beautifully engineered curves rhyme with the elegant construction of the Demaines’ tabletop-size sculptures.

Filmmaker Robert Flowers, brother of Tim, presents a wall-size, three-channel kinetic video, Dynamism of a Figure No. 2 (2014). According to the wall text, it employs state-of-the-art motion capture technology and 3-D animation to express “contemporary ideas about space-time, motion studies and cyborgism informed by the digital symmetry of the computer.” Flowers’ erudition was beyond me; the piece left me cold and struggling to understand it.

Earlier studies in motion by Étienne-Jules Marey, the French inventor of chronophotography, a technique that anticipated cinematography, and American photographer Eadweard Muybridge influenced the Futurists’ interest in modernity and speed. Marey’s Movement (1895), the book paired with Flowers’ work, gives a nod to his influence on both the Futurists and on Flowers, who claims Futurism as an interest.

This investigation of the parallels between artistic practice and scientific research and methodology makes for a thought-provoking exhibition about problem solving and the value of observation. Laboratory makes a persuasive case for Wilson’s belief that scientists and artists have the same creative wellspring.