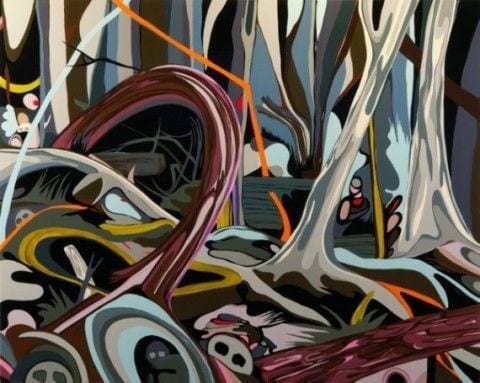 Review: In Sarah Emerson’s “Underland,” at Whitespace, the woods are lovely, dark and deep

The “Sea of Trees” named in the titles of some of the works in Sarah Emerson’s suite of paintings “Underland,” at Whitespace gallery through May 12, is the archetypal kind of forest that Europeans and Americans know well: a deeply fearsome place of the imagination. It stretches from the “dark wood” from which Dante Alighieri could escape only by way of a trip to Hell in “The Divine Comedy” to the bosky, Freud-inflected precincts of “Into the Woods,” Stephen Sondheim’s musical mash-up of multiple fairy tales.

But Emerson’s labyrinthine portrayals of ribbon-bedecked trees with skulls beneath them have a much closer kinship with the landscape that Robert Frost found “lovely, dark, and deep” in “Stopping by Woods on a Snowy Evening.” Many of us were taught as high schoolers that the poem’s protagonist refuses the temptation of disappearing into the woods, choosing rather to fulfill his “promises to keep.”

That also turns out to be exactly the case with the woods to which the paintings of “Underland” obliquely allude. The artist’s statement doesn’t reveal the name or location when it states that these paintings are based on an actual place, but the site is Aokigahara, Japan’s “suicide forest.” Photographs viewable online reveal striking visual parallels between Emerson’s uncanny imaginative world and this real-life dark wood in which hundreds of people have chosen to wander lost, with the intention of ending their lives. The brightly colored ribbons on the actual forest’s trees are latter-day Ariadne’s threads for the search parties that regularly set forth in hope of rescuing or recovering the bodies of the many who have gone into the woods on a suicide mission.

This background information lends a dimension of shock to “Underland” that is less immediately present in the work itself. The paintings possess an overall similarity intended to create an encompassing environment of disorientation: surrounded by them as by a fragmented panorama, we ourselves are meant to enter into the woods of death and desperation, a space interspersed with reminders of the hope of rescue.

This is a powerfully archetypal metaphor, but it is also one of the most domesticated themes in the art and literature of Western civilization. The pleasingly unsettled sensation of being immersed in these painted woods is a little like a highbrow version of the comforting genre expectations of the horror movie (about which Emerson has also produced a body of work, her “Last Girl” series of drawings). When we learn, however, that the dark wood is real and exists at the foot of the holy slopes of Mount Fuji, it is as though our cinematic and psychological nightmares have suddenly come to life.

Perhaps Emerson should have done more with this, instead of burying the information coyly in an allusion interpretable only through a Web search based on hints from the gallery staff. As it is, “Underland” has depths that function on a purely aesthetic level: the visual paradox of cheerfully bright bands of nursery colors appearing amid markers of horror neutralized by cartoon-like rendering. This encourages us to explain the scene by making up our own versions of familiar stories of failed quests, of beasts and sacrificial victims, of hunting parties lost in the great American forests, or what have you. These tales, too, are comforting by virtue of long repetition.

There is a case to be made for keeping interpretation open. But there are also times when the literal truth is more bizarre and frightening than any made-up story we could imagine. The reality of Aokigahara is the ultimate confirmation, perversely reversed, of the old song’s saccharine assurance that “fairy tales can come true, it can happen to you.”

Of course, the tales’ original audiences, for whom actual wolves and dark forests were everyday realities, already knew the relationship between archetypes and genuine existential threats. We, for whom fantasy is more often a means of escape from reality than a confrontation with it, may need a refresher course.