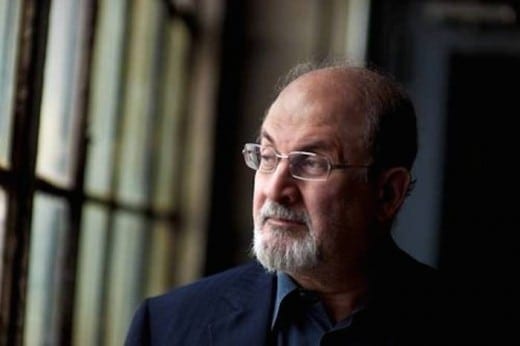 This ambitious, well-wrought 12th novel reads like mythology, an ancient philosophical text and contemporary science fiction all wrapped in one. Humor, references to pop culture and asides weave throughout the story, revealing a self-deprecating author who, at moments, doesn’t take his own imagination too seriously. “Love is rare in the jinn world. (But sex is incessant.)”

The narrative begins in 1195, Córdoba, Spain, where philosopher Ibn Rushd’s progressive views about science and reason lead to his fall from grace. He trades public humiliation and despair for a fiery love affair with Dunia, princess of the jinnias, or fairies, and they sire many children. Some nine centuries later, the seams between Fairyland and the human world give way, releasing the evil jinni.

“Everybody saw the giant jinni who emerged from the fireball, born like all male jinn from smokeless fire, toothy, pockmarked, wearing his long flame-red battle shirt decorated with its ornate golden motifs, with his great black beard tied around his waist like a belt…”

The evil jinni and his crew unleash an apocalyptic storm on a near-future New York City in an attempt to instill enough fear to “move sinful Man towards God.” Dunia must locate and reunite her progeny — include a levitating gardener, a hallucinating graphic novelist and a magic baby — to stop “world cataclysm.” A staunch atheist, Rushdie’s 1988 novel, The Satanic Verses, earned him both fame and a fatwa on his life, forcing him into hiding for years. In Two Years, he makes a plea to “set God aside, as boys and girls put down their childhood toys, or as young men and women leave their parents’ home to make new homes for themselves, elsewhere, in the sun.”

At times, the epic battle is too heavy-handed in its promotion of the superiority of science over religion. Two Years is so exquisitely rendered that Rushdie could have leavened his critique of faith with a lighter touch. Still, the novel is classic Rushdie, marrying a riveting plot with an impassioned exploration of the consequences of dogma, ego and the irony of history.

Rushdie will appear at the Jimmy Carter Library at 7.p.m. on September 17.