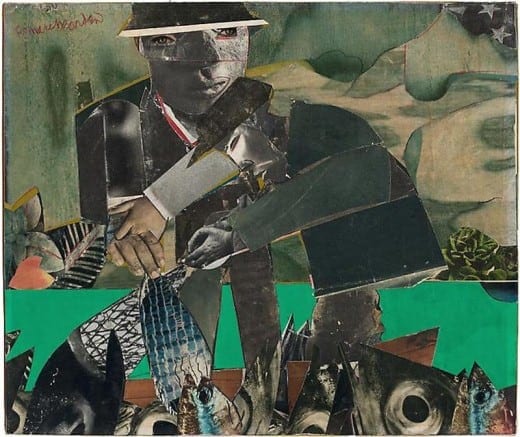 Romare Bearden: When I Conjure These Memories, at Alan Avery Art Company through January 16, 2016, is a thoughtful selection of work focused on the last 20 years of the master’s life. Bearden is best known as one of the premiere collagists of the 20th century. But he did not limit his creative expression to one medium. The exhibition, organized by Alan Avery and Jerry Thomas in conjunction with the Romare Bearden Foundation, encompasses his inventively abstracted monotypes and lush, dreamy watercolors as well as his signature collages.

The title is apt: Bearden famously drew subject matter from his remembrances. Bearden was born near Charlotte in Mecklenburg County, North Carolina, and although his family moved to New York three years later, he returned often to visit family and friends. His fond memories of his natal place are frequent subjects throughout his career.

Fishing and Crabbing, Three Mile Creek (1965) is a classic example of his early efforts. The small work looks uniformly dark at first, but as the eye adjusts, a night scene comes into view. Two fishermen in a boat are framed by the dark green cast of the sky, stars twinkling in the upper right corner. Cutouts of fish and netting in shades of dark green, black and gray float along the bottom edge of the piece.

The men’s faces are constructed in a composite, cubist-like manner, a convention Bearden used often in his collages. The larger figure’s face is a compilation of disparate features; eyes, nose and lips clipped from various magazines. His fishing partner’s face is a cutout of an African tribal mask. Bearden used African masks frequently in his collages to suggest his subjects’ connection to their African past. The hands (always interesting in Bearden collages) of the two fishermen are also constructed from clipped images.

Pittsburgh was another locus of fond and foundational memories. He spent many summers of his childhood with his grandparents, who had also migrated from the South. It was here that Bearden met Eugene Bailey, his best friend, who died of an illness in his teens. The 10-year-old Bearden’s fascination with Eugene’s drawings — which depicted the goings-on he surreptitiously observed peeking between the floorboards in the brothel where his mother worked — spurred his own desire to make art. (Bearden’s grandmother, who ran a boarding house for blacks who worked in the steel mills, found and destroyed the pictures and then adopted Eugene.) Perhaps Storyville Entrance (1976) is based on those memories. The titular subject, however, was the red-light district in New Orleans at the turn of the 20th century. In the foreground of this narrative, a nude woman poses for a gentleman seated just a few feet away. Her lower body is strategically hidden from view by an ornately designed medallion chair. Behind them in this dream-like setting is an opening to another room. Two figures, loosely drawn, perhaps intimately engaged, are visible through the doorway.

Pittsburgh is also the subject of a 1984 commission of a mural for a downtown subway station, represented in the show by a collage maquette. In Pittsburgh Recollections, Bearden narrated the city’s history, from the indigenous Native Americans, and the battles between the French and British and the early trappers, to the steel workers of Pittsburgh’s more recent, blue-collar past. He also gave a nod to the city’s multicultural and technology-driven future by coupling imagery of many-hued youth with imagery of microscopes and computer discs.

Known as a great storyteller, Bearden was also accomplished at applying artistic styles in new ways to create his desired result. Here, he adopted a mode perhaps inspired by Matisse’s cut-outs, easily translated into tiles.

While Bearden had family in Charlotte and Pittsburgh, he called New York City home. It was here that his inquisitive nature was fanned and fed, where he worked, as he described it, to “forge a cultural synthesis between the Harlem where I grew up and the Haarlem of the Dutch Masters that contributed to my understanding of art.”

It was here that he also experimented with printmaking. Bearden created dozens of monotypes between 1975 and 1983 at the Printmaking Workshop, founded by the legendary master printer Bob Blackburn (who also worked with the likes of Jasper Johns, Robert Rauschenberg and Helen Frankenthaler).

He developed a technique that mixed painting, drawing and printmaking and infused nearly all of his monotypes with “bubbles,” which added visual interest and dimensionality. Unique to Bearden at the time, the bubbles might appear randomly placed, but the process, which entailed pouring solvent on the inked printing plate, was very controlled and deliberate. Bearden conjured musical memories in five of the six monotypes on view. Blues at Night (1981) features a pianist and female blues singer resembling Ethel Waters and accompanist Fletcher Henderson outside under a full moon. Almost monochromatic, the scene is punctuated by the white outlines of the piano and pianist and the singer’s yellow dress.

Music played an important role in Bearden’s life. His mother Bessye was an accomplished pianist, and she and husband Richard frequently entertained jazz greats such as Fats Waller, Duke Ellington, Billie Holiday and Louis Armstrong. As an adult, he had a short but successful career as a songwriter in the mid-1950s. Seabreeze, his biggest hit, was recorded by Billy Eckstine and Tito Puente.

Music was more than subject matter; it was a model for making art. As Bearden said, “The more I played around with visual notions as if I were improvising like a jazz musician, the more I realized what I wanted to do as a painter, and how I wanted to do it.”

In addition to the collages and monotypes, the show includes a variety of watercolors. Most were painted on the Caribbean island of St. Martin, where he and his wife had a home. These works, in contrast to the collages, are abstracted, dreamy and aqueous. Some are straightforward landscapes. Others reflect his fascination with the Obeah people, island natives who descended from Ashanti or Dahomean African tribes and maintained religious beliefs and practices similar to other diasporic cultures, such as of the Gullah of South Carolina and Haitians who practiced Voodoo. Obeah of High Category (1984), a powerful late watercolor depicting a seated man is unusually reductive compared to the other works in the show. The picture plane is mostly white space. The thin black lines that define the figure and his robe hark back to Bearden’s early works of the ’40s such as his Passion of Christ series. His face is black and angular like the masks in his collages. Thin red lines outline his ferocious eyes. He wears a white kufi, a traditional cap worn by West African men. Atop the cap is a crown or ball of fire befitting of a noble. The chair is abstractly created such that the viewer only sees the back, yet, it is clearly intended to denote status as well.

Interestingly, the mark-making is similar to that of Jean-Michel Basquiat, who was active at the time the elder artist made this watercolor. Could they have influenced each other?

Bearden, who was no stranger to Atlanta, would be pleased to know that his memory is well-served by an exhibition that captures his masterful technique across mediums and his creative spirit.