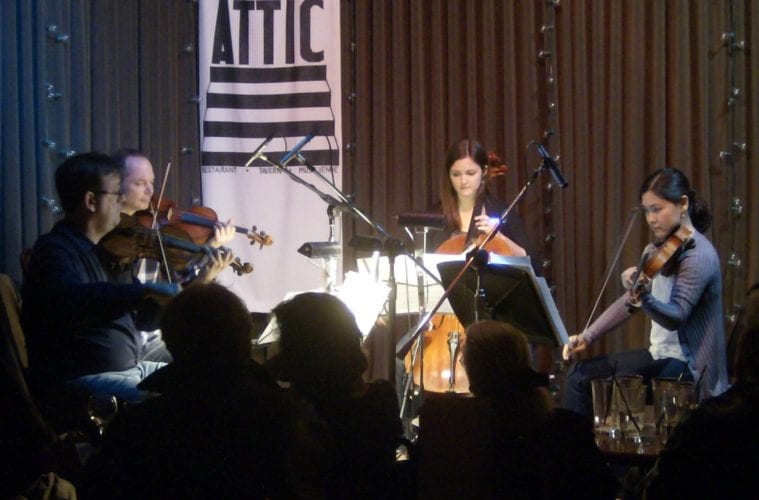 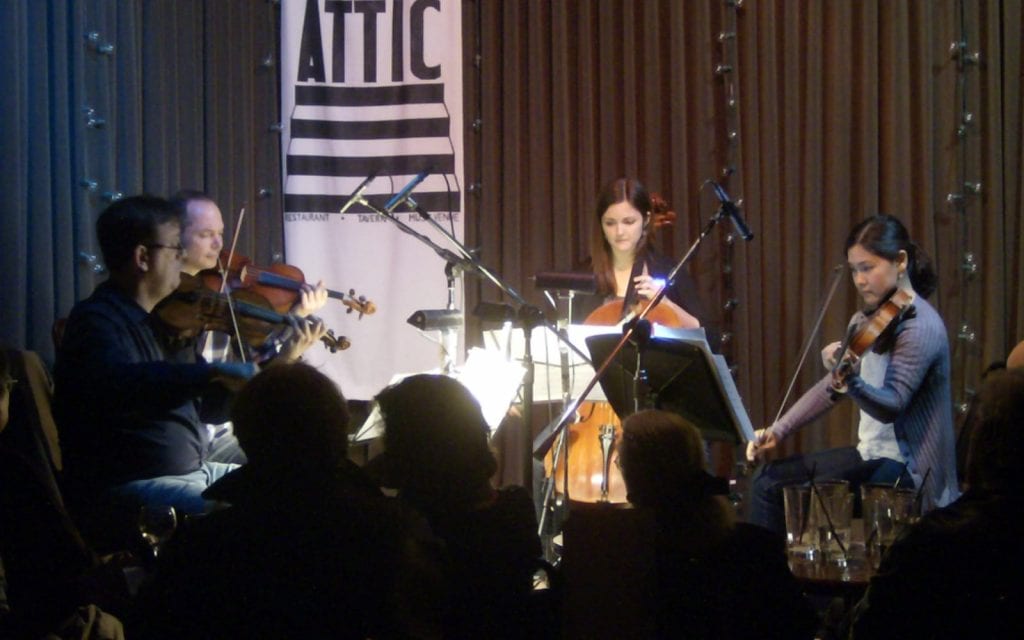 The Peachtree String Quartet is less than a year old, but in that brief time its musical identity has been rapidly coming into focus. Its most recent performance was Tuesday night at Eddie’s Attic in Decatur. The players are violinists Christopher Pulgram and John Meisner, violist Yang-yoon Kim and cellist Jennifer Humphreys, all members of the Atlanta Symphony Orchestra.

The show opened with the complete String Quartet No. 4 in C major, K. 157 by Wolfgang Amadeus Mozart. It’s one of his six early “Milanese” quartets, so called because they were composed while he was in Milan working on his opera “Lucio Silla” at the ripe old age of 16. Part of the quartet’s musical identity is how it approaches Mozart’s music, as well as the Boccherini that followed it and the Haydn string quartet excerpts played later: vibrantly bright, extroverted performances that retain grace but are not annoyingly “precious.”

The “Minuet” by Luigi Boccherini was written a year before the Mozart quartet. Adapted for quartet from Boccherini’s String Quintet in E major, Op. 11, No. 5, it is immediately recognizable from its extensive use in movies and television as a meme for aristocracy. It was even quoted at the end of the song “Heavy Duty” in the 1984 heavy-metal spoof “This Is Spinal Tap.”

A change from the 18th to the early 20th century came with two of the “Three Idylls” from 1906 by Frank Bridge, an English composer and violist who was also the composition teacher of Benjamin Britten. Born in 1879, Bridge was a pacifist, and his experience of World War I sharply altered his style from that of the “Idylls,” which had earned him great respect. No surprise that the first of these “Idylls” opened with a prominent viola solo, which Kim played eloquently.

The quartet then played a piece unlikely to be heard in concerts these days, but highly appropriate for the informal Eddie’s Attic: the sentimental English song “Drink to Me Only With Thine Eyes,” arranged by violinist Alfred Pochon. Pochon was the second violinist of the Flonzaley Quartet, which first recorded his arrangement in 1920 for the Victor Talking Machine Company; it was issued on a 78 rpm disc when such recordings were still made by purely mechanical rather than electrical means. The Peachtrees’ performance was an exquisite example of what “popular classical music” was in early-20th-century America.

The group closed the first half with a fun, engaging Beatles medley arranged by Matthew Naughtin. It opened with “Day Tripper,” “A Hard Days Night” and “Eleanor Rigby.” The audience began laughing and singing as “Yellow Submarine” came forth, replete with violin harmonics that sounded like whistling the tune. “Yesterday,” “When I’m Sixty-Four” and “Back in the USSR” rounded out this worthy adaptation.

The second half opened with works by two of the group’s ASO colleagues. First up was the premiere of a pair of short pieces by Atlanta composer Robert Cronin, known to local audiences as the associate principal flute of the Atlanta Symphony. Titled “Fate” and “The Egoist,” they were adapted from two of Cronin’s six “Parham Songs” for voice and piano, written last year, which bear the same titles. Both are well-crafted works of emotional depth that deserve wider exposure.

These were followed with “Sometimes I Feel Like a Motherless Child,” inspired by the classic spiritual and composed by Michael Kurth, also a member of the ASO. It’s not the first time the piece has been played in Atlanta, but it was an exceptionally moving rendition.

The music of both Cronin and Kurth seemed to connect well in the mind and ear with that of Bridge heard in the first half, though each composer is individual in style.

The concert closed with three exemplary works from the standard string quartet repertoire. Leading off were the last two movements of Franz Joseph Haydn’s “Rider” String Quartet (No. 59). It was followed by the lovely “Nocturne” from the String Quartet No. 2 by Alexander Borodin, in which Humphreys performed a notable opening rendering of the tune (and from which the song “And This Is My Beloved” was hijacked for the 1953 Broadway musical “Kismet”). The show concluded with the energetic final movement of Ludwig van Beethoven’s String Quartet No. 9, the last of his three “Razumovsky” quartets.

Although the concert was promoted as “The Killer B’s,” in reference to composers such as Beethoven, Boccherini, Bridge and Borodin, it fortunately made use of other letters of the alphabet rather than sticking too closely to that plan. What we got was a balanced evening of music with cohesiveness but enough depth and range to leave the audience with the satisfying feeling of a good night out.