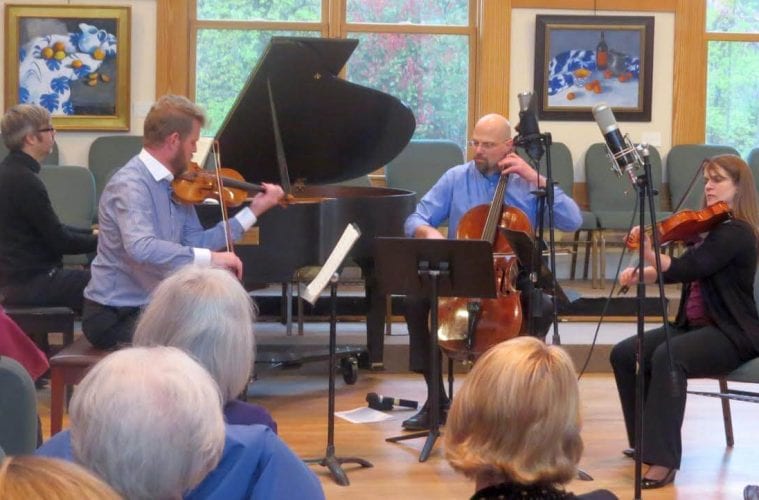 On Sunday’s cloudy and misty afternoon, the Riverside Chamber Players performed a concert of music by Brahms and Schoenfield in the sanctuary of the Unitarian Universalist Metro Atlanta North congregation in Roswell — the group’s home venue since November 2015.

The 260-seat sanctuary is architecturally clean-lined and spare, with a good, solid tongue-and-groove wooden floor and plainly peaked cathedral ceiling. The room’s acoustics favor string instruments, imparting warmth, body and power to the sound without losing clarity or presence. The small grand piano is a short-scaled instrument and, given its size, nevertheless enjoyed a good balance with the strings in the space.

The concert opened with the Piano Quartet No. 1 in G minor, Opus 25, of Johannes Brahms, performed by violinist Justin Bruns, violist Jessica Oudin, cellist Joel Dallow and pianist Tim Whitehead. Written in the years between 1857 and its premiere in 1861, when Brahms was in his late twenties, it is a combination of turbulent romantic vocabulary combined with a remarkable mastery of musical architecture.

The first movement, a somber, expansive Allegro, opens with piano alone, presenting a theme whose salient motif binds a plethora of themes into a cohesive whole. The “Intermezzo and Trio” that follows is a gentle, moderate-paced scherzo with lyrical melodies, although repeated eighth note figures in the outer sections inject some agitation, with the middle section a bit more relaxed.

The third, Andante con moto movement begins as song that evolves into a march that resolves the expressive tensions of these three movements, at which point Brahms “lets go” with a Presto-paced final movement, entitled “Rondo alla Zingarese.” It’s often referred to as “Gypsy Rondo” in English — alla zingarese means “in gypsy style.” In Brahms’ time and culture, describing music as “Gypsy” or “Hungarian” were essentially the same. Here is found the same exuberant Romani influences as in the composer’s “Hungarian Rhapsodies,” albeit in a more complex musical package.

It’s one of the most demanding movements found in Brahms’ chamber works, but the Riverside players gave the entire piece a warmly colored, full-bodied reading that made for a hearty, satisfying first half of the program.

Riverside cellist and artistic director Joel Dallow discovered Paul Schoenfield’s “Café Music” for piano trio when he played it this past summer as part of the Chamber Music Festival of the Black Hills in Rapid City, South Dakota, and decided his Riverside audience would love the piece. Bruns, Dallow and Whitehead performed it after a brief question-and-answer session — a Riverside tradition — which followed the Brahms.

Despite an abundance of complexity, “Café Music” is at once immediately accessible to the listener and likable. It’s well-crafted, technically substantive and endearingly witty in its melding of classical, early jazz, klezmer and Gypsy, into a delightfully high-energy stew of musical styles. Imagine a kind of blending of the American iconoclastic spirit of a Charles Ives with that of the Yiddish renaissance.

“Café Music” was written in 1986, after the composer did a stint as a cocktail pianist. The prodigious piano part is no surprise, as the Ohio-based Schoenfield is himself a considerably gifted pianist, as evidenced by his own recording of the work for the Innova label. But the string writing is equally ambitious. The Riverside players were up to the challenge, delivering a exciting, high-energy performance of the work.

The Brahms and Schoenfield actually made a compatible pair, with connection in their respective uses of musical vernacular — the final “Gypsy” movement in the Brahms and the entirety of “Café Music” — given the 125 years between their respective creations. Both are intrepid works of substance, of essentially equal weight and appeal, but also with some raucous fun present in each. Together they made for an excellent, engagingly played program with which to end the final concert of the Riverside Chamber Players’ 2017–18 season.