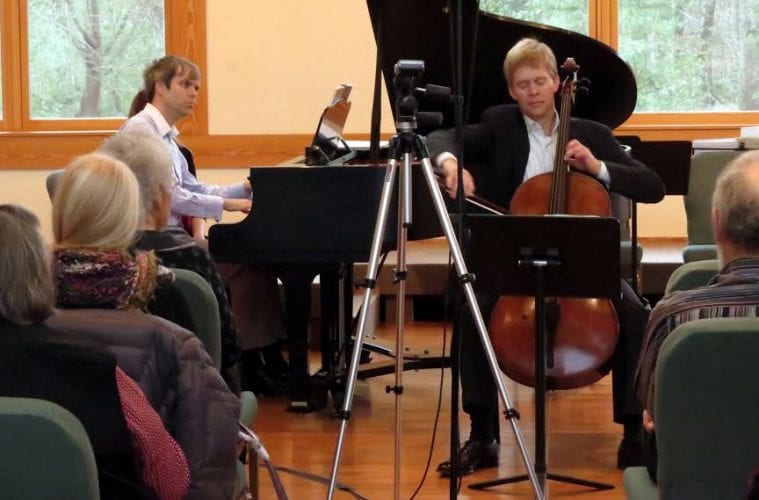 On Sunday afternoon, the Riverside Chamber Players opened their new season with a concert of music by Beethoven and Schubert at the Unitarian Universalist Metro Atlanta North church in Roswell.

UUMAN is an entirely new venue for Riverside Chamber Players. Just last March, the group performed their final concert at Bridge to Grace Church in Roswell, their concert home of six years. A search for a new location within the Roswell city limits ensued, and the Riverside group found UUMAN a willing location on the other side of Roswell.

The UUMAN congregation’s 260-seat sanctuary is architecturally spare and bright, with a solid tongue-and-groove wood floor. It has a plainly peaked cathedral ceiling, with generous windows and pine plank trim work aplenty.

The intermission-less concert opened with the first movement of Ludwig van Beethoven’s Cello Sonata No. 1 in F major, Op. 5 No. 1, performed by cellist Brad Ritchie and pianist Tim Whitehead. It was written in 1796, at the same time Beethoven was composing his seminal early piano sonatas.

The room’s acoustics favored Ritchie’s cello well, especially its tenor range. UUMAN’s somewhat smallish grand piano nevertheless had a surprisingly good tone for its size, and Whitehead never overwhelmed Ritchie’s cello. It was an enjoyable, well-balanced performance — a good omen given that that Ritchie and Whitehead are in the throes of recording all five of Beethoven’s cello sonatas.

Written in the last year of Schubert’s short life, it was his only string quintet but a rather extended one, clocking in at around 50 minutes (which would explain why Ritchie and Whitehead played only one movement of the Beethoven, which was itself about 13 minutes long). In all of the quintet’s four movements, Schubert’s inventiveness and structural sense are at their best. The addition of the extra cello to a typical string quartet gives the work an expanded sonorousness and variety of color and texture.

The first movement, an expansive allegro ma non troppo, lasted nearly 20 minutes — over a third of the quintet’s total duration. The expressive second movement, marked adagio and in ternary form, was sublimely placid in its outer sections with a rather turbulent contrasting middle.

The scherzo that followed was substantial in its scope, and exploited the open strings of the viola and the cellos to good effect in a bold but unrushed presto for the outer scherzo-proper, with a darker, more inward-looking Andante sostenuto section in between. The long build-up over those three movements led to an exuberant final movement, a sonata-rondo with Hungarian-influences, where there was much detail to enjoy amid a cumulative intensity which, happily, the ensemble never allowed to get frantic.

The sound of the quintet was very up-front and energized, with a boldness in the lower cello range, an attractively truer sound in the ensemble’s mid-range. The only shortcoming was a hint of metallicness that crept in when the violins played on the higher side of the treble.

Nevertheless, the room has an overall attractive acoustic for chamber music, with sufficient bloom to be friendly to stringed instruments, yet with good detail delivered to the listeners. The UUMAN space is a nice discovery for both performers and audiences, and should prove a fine anchor venue for upcoming Riverside Chamber Players’ performances. Their next concert at UUMAN will take place on March 6.