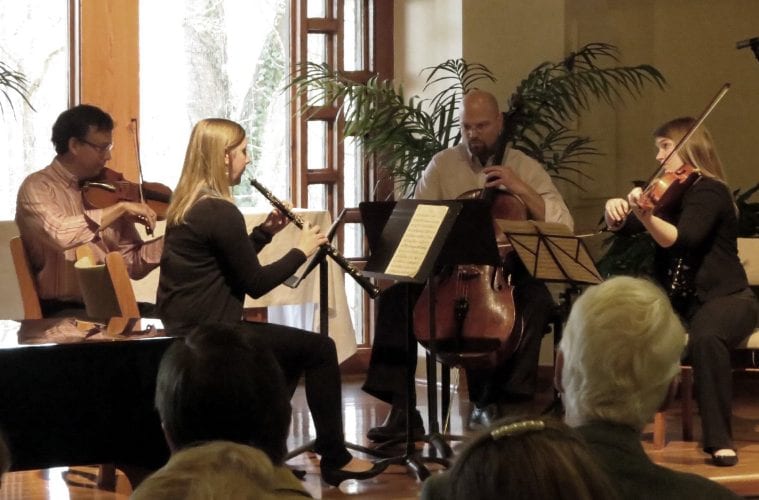 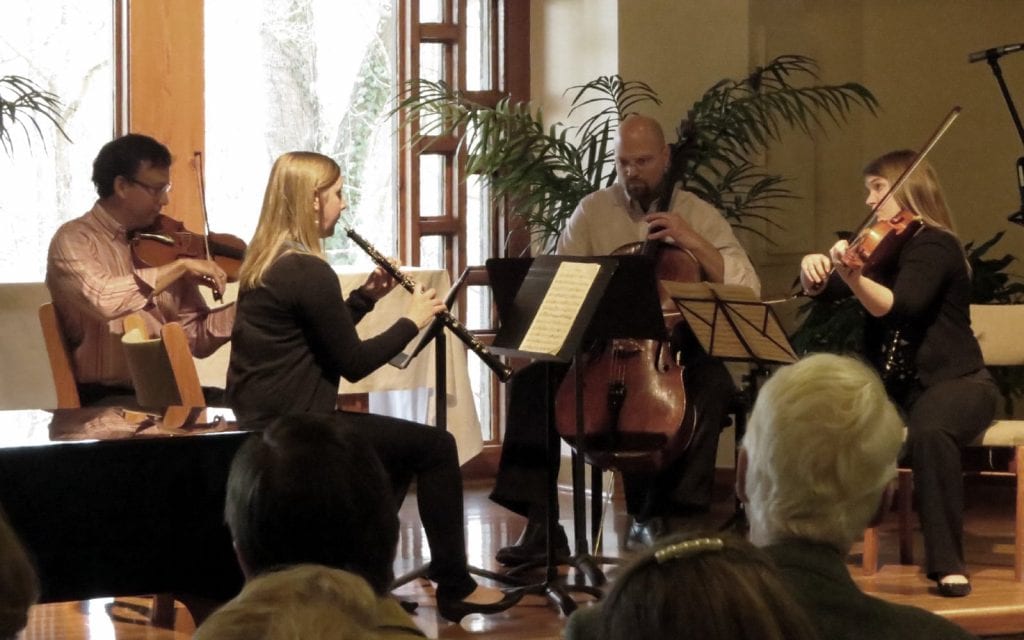 The Riverside Chamber Players played their final show at in the Bridge to Grace Church Roswell. (Photo by Mark Gresham)

The Riverside Chamber Players presented the final concert of the season Sunday afternoon at the Bridge to Grace Church in Roswell, featuring music by Michael Kurth, W. A. Mozart and Dmitri Shostakovich.

The concert opened with the premiere of one of Kurth’s compositions, “MythMusic,” performed by Brebach, Wagner, Dallow, Settle and Whitehead. Brebach doubled on oboe and English horn; Settle played a small setup of multiple unpitched percussion instruments.

“MythMusic” was commissioned by Thomas Wardell, who is a collector of Native American mythology. His interests include, in particular, the myth about the origin of the loon, which tells of a chieftain’s daughter who falls in love with her half brother, son of the chieftain’s wife and the Great Spirit. When he spurns her, she goes on a murderous rampage, and is cursed by the Great Spirit with an ungainly walk and a mournful cry. For a while she is able to transform between woman and bird, but the spell is complete when she is permanently turned into a loon.

The work’s three movements — “Portents,” “Longing” and “Complicted” — portray elements of the story and characters, from the doleful sounds of the loon to sections of energized rhythmic interest that reflect the composer’s engaging and often populist style.

Brebach, Wagner and Dallow were joined by violist Jessica Oudin for Mozart’s Oboe Quartet in F major, K. 370/368b. For this piece, the musicians were seated upon the dais in the corner behind where they had been for Kurth’s music. This necessitated that the piano be moved out of the way for audience sight lines, as well as moving the recording mics forward, closer to the dais.

The Oboe Quartet was written in early 1781 for virtuoso oboist Friedrich Ramm, a member of the Munich orchestra, while Mozart was in Munich at the invitation of Karl Theodor. Mozart and Ramm had first met in Mannheim in 1777, so they renewed their acquaintance during the visit.

The piece was meant to display both Ramm’s abilities and some technical improvements to the oboe itself. One feature was use of the high F above the treble staff, rarely found in earlier oboe repertoire. There is a lot of virtuosic playing required of the oboist, giving the music a degree of concerto-like feeling, but there is much close ensemble playing as well.

One of its oddities is in the finale: 13 bars during which the oboist plays in “common time” while the strings continue to play in 6/8 meter. Brebach, as oboist, got a well-deserved extra acknowledgment from the audience at the end.

After rearranging the staging again, the musicians returned to the main floor level. Wagner, Dallow and Whitehead concluded the concert with the 13-minute Piano Trio No. 1 (Op. 8) in C minor by Shostakovich. It is one of only two works Shostakovich wrote for violin, cello and piano, and was published only posthumously.

Originally titled “Poème,” the trio was was composed when Shostakovich was 17, in the summer of 1923 while he was on a health-rejuvenating vacation in the Crimea with his sister. The largely Romantic style, which he would soon reject, predates the mature modernist hybrid style for which he is best known. All of the themes derived from the slow, yearning, chromatic motive that opens the one-movement work, which nevertheless possesses variety in character and tempo.

The entire performance was a well-played, delightful concert for a sunny Sunday afternoon. As a concert venue, the Bridge to Grace has been good for the group and comfortably accommodated Sunday’s full-house audience. But alas, it was not only Riverside Chamber Players’ final concert of the season, it was their last at Bridge to Grace. After six years performing there, RCP is now obliged to move — word is the church now needs the space and time slot for its own programs.

Riverside Chamber Players has begun searching for a new concert series home within Roswell city limits. In part, that limitation is related to the group’s funding; also, artistic director Dallow firmly believes in Roswell as the place where there is both the need and audience for their kind of chamber music programming.

It’s now just a matter of finding a new, viable and hospitable space in which to perform.