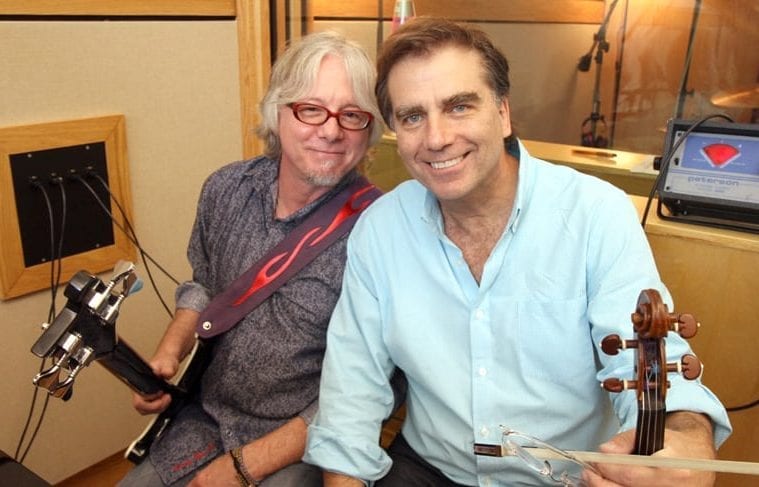 On Friday evening, violinist Robert McDuffie headlined a concert of American music featuring the new Concerto for Violin, Rock Band and String Orchestra by Mike Mills — a founding member of the legendary alternative rock band R.E.M. — plus music by John Adams and Philip Glass, in the 800-seat Emerson Concert Hall at the Schwartz Center for Performing Arts. McDuffie was joined in the concert by pianist Elizabeth Pridgen, the Chicago-based Fifth House Ensemble led by conductor Eli Chen, and a rock band comprised of Mills on bass guitar and keyboard, guitarists John Neff and William Tonks, and drummer Patrick Ferguson.

Friday’s performance was the sixth in a whirlwind 13-city tour following the concert premiere of the Mills concerto at the Aspen Music Festival on August 11. A recording of all the music on this program was released October 14 on the Orange Mountain Music label.

The show’s first half was comprised of two works written in 1995, literally at the halfway point in the active lifespan of R.E.M. McDuffie and Pridgen opened with “Road Movies” by John Adams. The title of the three-movement work is entirely fanciful, although Adams is often inspired by images of movement across a landscape, whether real or imagined. The rhythmic groove of the outer movements suited McDuffie’s aggressive violin style and Pridgen’s pianistic dynamism, with a more meditative movement sandwiched in between.

Fifth House Ensemble then took the stage to perform the Symphony No. 3 for string orchestra by Philip Glass, a piece which unfortunately started to wear thin and tire the ear about two-thirds of the way through.

But the crowd was drawn by the rock star in a classical setting. McDuffie and Mills were close friends growing up in Macon. After high school, they went different musical ways: McDuffie to the Juilliard School and a career as a classical solo artist, Mills to University of Georgia in Athens and a career in an iconic rock band. The concerto project was at McDuffie’s instigation, to which Mills quickly agreed.

Composing the concerto was by no means a deep dabbling into the textbook classical form. At the outset, Mills cautioned the audience that what they were about to hear was not “classical music” but “rock music with some classical elements.” That proved an accurate, honest self-assessment. Instead of trying to emulate the 200-year-old textbook concerto, its six movements came across, in terms of structure, like one side of a vinyl LP of yore: as a well-threaded arc of contrasting songs.

Much to his credit, Mills successfully avoided the pretenses that typically come with more pointedly “classical crossover” projects. Instead we got a durable rock foundation over which a mostly classically oriented violinist is given opportunity to stand in for rock vocals and lead guitar riffs, plus a sufficient dose of overtly “classical” passages that showed off McDuffie’s technical abilities. That’s all for the better, as most listeners who have lived within the last half century or so don’t need a textbook to know how to rock.

The concerto’s opening movement, “Pour It Like You Mean It,” kicked off with a fast-moving melodic bass line that is signature Mills, revving up the band’s engine, then backing off a bit when Mills moved over to the piano for “On the Okefenokee.” The concerto got fully into gear with the energetic, backbeat-impelled “Sonny Side Up.” “Stardancer’s Waltz” proved a fine balladish number that could easily stand on its own, followed by a classical-flavored rendition of R.E.M.’s haunting “Nightswimming.” The concerto closed with a bang, in a more upbeat, driving rock mode, with “You Can Go Home Again.”

If there was a prominent weakness to this performance, it was that the Fifth House Ensemble’s small string orchestra, arranged by David Mallamud, was at times difficult to hear, and when heard came across mostly like “sweetening” rather than a supportive full partner in the music. Mallamud also composed some more interesting, if brief, original passages for the concerto’s orchestral parts, which were more exposed and better heard.

Frankly, though, the orchestra could have been dispensed with, without much harm to the concerto’s impact overall. Had it been just McDuffie, Mills and the rock band, that would have been totally righteous by me.