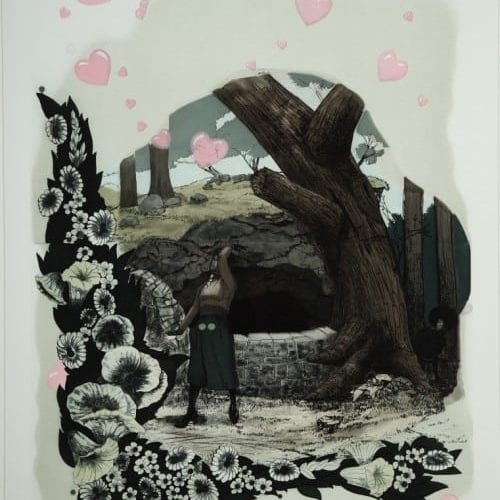 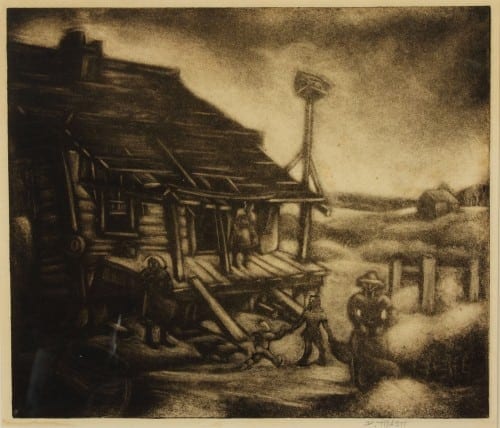 Tedious and heavily process-oriented, the art of the print, like other analog forms, has become increasingly lost among more immediate solutions to image-making. The High Museum offers a substantial nod to the historically rich tradition with two concurrent exhibitions, both focusing on recent acquisitions. While Paper & Ink offers a lean sampling of the last 500 years of printmaking, the adjacent contemporary exhibition, A Decade of David C. Driskell, featuring works related to the High’s Driskell Prize and also largely inclusive of print works, is where most of the magic is. Together, the two exhibitions present a compelling dialogue on printmaking’s complicated history as well as its contemporary relevance.

Older than paper itself, printmaking largely evolved throughout modernity as a process analogous to the more monumental art of painting: either a painter’s preliminary process of exploring composition, or a way to replicate master works. As a result, and depending on the artist and the age, printmaking’s status as an independent art form has been a concept in regular flux.

Paper & Ink, a selection of 31 prints of the 450-plus acquired by the High in the last five years, presents works on both sides of this argument. Aside from a handful of outstanding images, the exhibition, curated by David Brenneman and Michael Rooks, reads as yet another restaging of the usual suspects in painting’s history, mixed with a lot of subpar works. One wants to thumb through the remaining 419-plus prints. 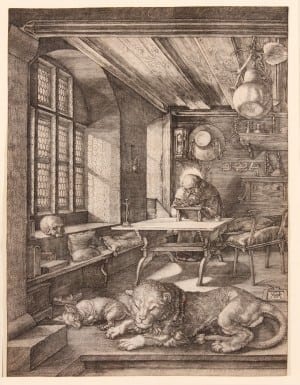 Albrecht Dürer, Saint Jerome in his Study, 1514, Engraving, purchase with funds from the Estate of Barbara Dunbar Stewart.

There are, however, a few notable exceptions, like Albrecht Dürer’s St. Jerome in his Study (1514). Dürer revolutionized printmaking in his day, arguably among the first to elevate the medium through his precise lines and the general broadening of its dramatic form. Easily heralded as one of the artist’s greatest works (even Dürer himself deemed it one of three so-called “Master Engravings” of his oeuvre), this exquisite print is a rare jewel for the High’s permanent collection and the highlight of the entire show.

Another substantial inclusion is Georgia Cotton Crop by African American printmaker Dox Thrash. The carborundum mezzotint (a process developed by Thrash and his colleagues in the 1930s) recalls a pivotal moment for printmaking in African American art, and the substantial impact of the Federal Arts Project during a time when printmaking facilities were not widely available to black artists.

The neighboring Decade of David C. Driskell, curated by Michael Rooks, expands printmaking’s contemporary timeline, providing evidence the art form has reemerged with a stronger force of identity within the last few decades.

Accessibility to printmaking has expanded exponentially with the mainstreaming of art school education. This, combined with newer technologies as well as the leveling of painting with other art forms, has allowed for the medium to flourish. Here, we see printmaking at its best — lushly exploiting all its technical nuance and splendor.

Celebrating its 10-year anniversary, the collection consists of both former Driskell Prize winners as well as works acquired through the Driskell fund for the purpose of expanding the High’s African American permanent collection. A small but robust collection of drawing, painting, printmaking, sculpture and photography, the majority of prints exhibited — including multiple works by five different artists — are strong, resolute and well-executed. Some will knock your socks off. 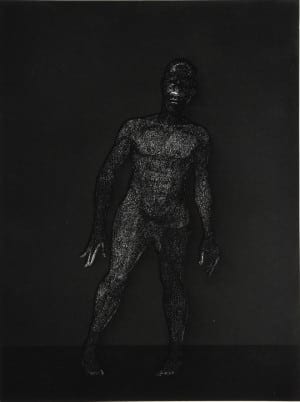 Three etchings by painter Kerry James Marshall are featured, each employing the vehicle of illustration, a mainstay of printmaking, to retell popular European narratives in storybook fashion. These works reflect Marshall’s larger interest in commenting on the absence of black figures as central in painting’s historical timeline, as well as use of literal black ink as an interpretation of invisibility.

In Marshall’s Vignette (Wishing Well), a black woman throws a coin over her shoulder into a well while a grisly afro-sporting, humanlike animal watches. The smaller Frankenstein and Bride of Frankenstein depict African American versions of these characters from Mary Shelley’s canonical work, each figure barely visible as it emerges from deep, velvety blackness.

Next to Marshall hangs Auguries, Julie Mehretu’s gigantic 12-panel, 10-color etching. Of Ethiopian decent and trained as a printmaker, Mehretu fabricated this symphonic constellation of marks in response to Richard Wagner’s Das Rheingold. Mehretu will gives an artist’s talk at the High on April 21. 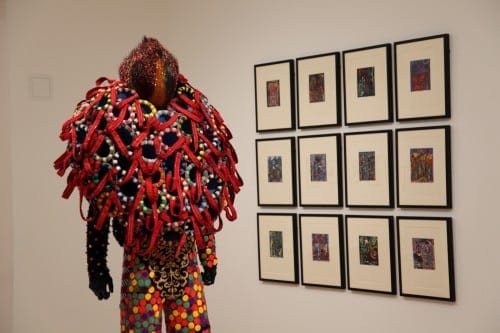 Collage I by Willie Cole, 2006 winner of the Driskell Prize, is a humorous but weighty rumination on the hairdryer, seen here in multiple Xeroxed iterations, resembling something of an African deity. As a self-proclaimed “urban archaeologist,” Cole makes use of such household objects as they reflect larger social and metaphorical interpretations pertaining to consumerism, race and African-ness as part of a complicated American construction.

While many of the works included address social, historic and political issues relevant to black identity, Doorway, a series of serigraph (or silk-screen) prints made by David Driskell himself, focuses on Maine as a “wellspring of inspiration,” according to the artist. Raw, painterly and exuberant, this portfolio of works made in collaboration with writer Michael Albert calls to mind Gauguin-like exoticism mixed with the jazz-infused vivacity of the Harlem Renaissance painters.