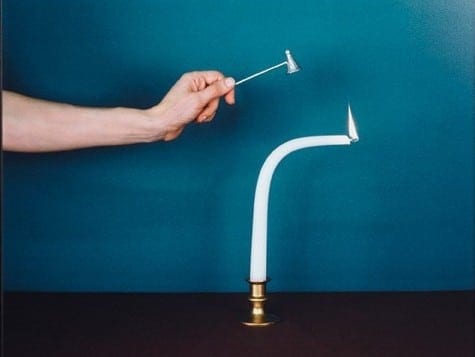 The Benign Violation Theory, proposed by Dr. Peter McGraw of the Humor Research Lab at the University of Colorado Boulder, identifies humor as occurring when an object or situation is threatening either physically or to a perceived worldview (a violation) while simultaneously nonthreatening (benign). It is through this paradoxical lens of benign violation that we can begin to examine Pratfall Tramps at the Atlanta Contemporary Art Center through April 11.

Rafferty conflates images pulled from the world of stand-up comedy with references to the female body and domesticity. For example, she replaces microphones with cooking utensils in Testing I – V; in Slide she covers the faces of scantily dressed women in a vintage photograph with sunny-side-up eggs (egg on their face!). If these are commentaries on sexism, the humor of the non sequiturs softens the message: a benign violation.

Carland and Isenstein also make reference to live performance, although the results are less overtly gendered. Carland’s photographic works show anthropomorphized objects — ladders, chairs, a mop — isolated and arranged on a proscenium stage. These objects are stand-ins for the absent performer. In her video piece Live From Somewhere, which uses footage taken from the 1979 Broadway show Gilda Radner: Live From New York, a pair of spotlights endlessly scans a stage curtain, building anticipation for the entrance of the performer who will never come.

Isenstein also uses inanimate objects as surrogates for the performing body. In her photograph Snuffer, a lit candle seems to lean out of the way as a human arm reaches in like a vaudeville hook to extinguish the flame.

These works by Carland and Isenstein use the specific experiences of stage fright and performance anxiety as a foundation from which to explore a larger existential conflict.

They expand these silly moments and simple gestures into something that becomes more achingly human than the self-evident levity would suggest.

The most engaging and complex piece in the exhibition is Kelley’s 2009 video Sadie the Saddest Sadist. In a mesmerizing seven and a half minutes, Kelley tells (in verse) the fictional story of Sadie, a young woman in World War I–era England who seeks independence through work in the war effort, but ultimately fails when she falls for a rakish seaman, abandons her work and ultimately contracts venereal disease.

In the highly stylized video, which incorporates live action performance, built sets and animation, Kelley tells a tragic, if a bit clichéd, cautionary tale. Yet with her deadpan delivery of excellent puns like “I know that you care by the Marx on my Lenin,” we can’t help but laugh.

ACAC’s two auxiliary spaces have been imbued with the same spirit of humor. The shop, renamed Letters & Tomatoes, features a curated selection of merchandise and printed matter presented by ART PAPERS that thematically engages with work in the exhibition.

ACAC’s resource room, typically a reading room featuring arts journals and periodicals, has been transformed into the Gilda Radner Research And Translation Center (GRRTC). This fictive institution is dedicated to the development of Radner studies and the translation of the late comedian’s stand-up jokes into “lesser spoken languages (LSL)” — specifically Welsh.

Jointly developed by Reese and Alex Robins, a philosophy PhD candidate at Emory University, GRRTC features a variety of displays dedicated to the comic, including the interactive Make Your Own Paper Cut-Out Gilda and the GRRTC Timeline Initiative, titled Gilda Radner and the Cold War: Coincidence?, which exhaustively compares events of Radner’s life with those of the Cold War. A comment box–style display invites visitors to deposit a question to which the GRRTC staff will respond in the style of Radner’s famous character Roseanne Roseannadanna.

However, much like the work on view in the main exhibition, GRRTC’s gleeful absurdity is tempered by tragedy: here, a display of vintage periodicals covering Radner’s illness and eventual death from ovarian cancer.

Pratfall Tramps is as intellectually challenging as it is entertaining. Its central strength is its unabashed willingness to straddle the conflicting space that exists between tragedy and comedy, success and failure, erudition and intuition. Humor is the tool by which these artists examine and deconstruct oppressive systems of power and the human condition.

The humor in the exhibition does not obfuscate the gravity of its underlying themes but rather enhances it by taking them lightly: a benign violation. Failure becomes success. Tears of sadness become tears of joy. The human condition is both serious and seriously funny.

The book release party for the catalog for Pratfall Tramps will be held on — you guessed it — April Fools Day from 7 to 9 p.m. Alex Robins of the GRRTC will hold office hours at the same time.