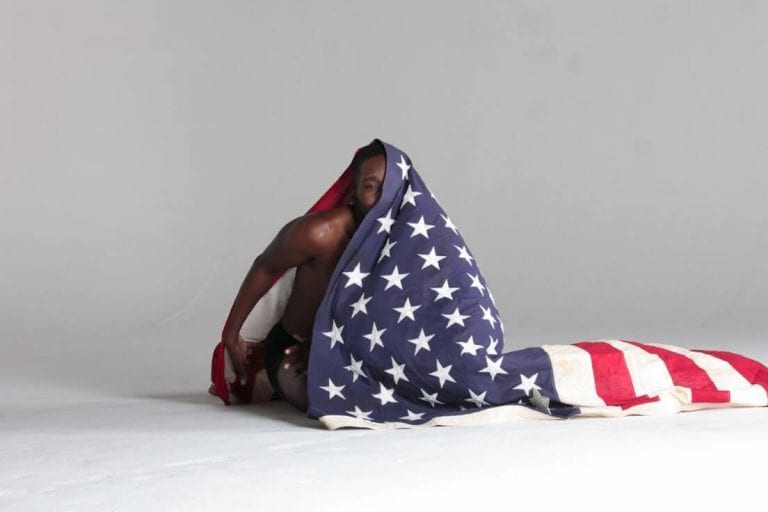 Dancer and choreographer Demonte Polen was one of the artists who performed work in Citizen Lift. (Photo by Jonathan Scott )

“The personal is political,” or so we’re told. Even so, all too often there can be a touch of something cold and impersonal about a great deal of “political” art. Not so with Citizen Lift, the latest in a series of annual dance performances showcasing the work of male dance artists of color organized by Atlanta choreographer Daryl Foster (previous iterations have usually just been called Lift). The vibrant and moving production, which had two performances at Atlanta’s Out Front Theatre in West Midtown June 15–16, took on a new sense of political urgency and personal reflectiveness this year. Although the annual showcase debuted in 2009, the evening also marked the debut of a new component of Lift: a seven-member dance company dedicated to presenting work that deals with relevant issues faced by men of color.

The subjects of the eight works on the program ranged from mass incarceration in Cory Hartzol’s “Only God…” to HIV/AIDS in Rodney A. Brown’s duet “Loving Lloyd.” The political mood likewise varied from defiant and exasperated to broodingly meditative to dreamy and hopeful in choreography that blended​ styles from the visceral rhythms of hip-hop to the athleticism and lyrical expressiveness of technical ​modern dance.

Many of the dancers, most of whom appeared in more than one work, were extraordinary, a fact which became most apparent during segments of group movement; dancers always moved with impressive synchronicity, but they also remained fascinatingly individuated; personality and individual style were always visible, even in the several works where dancers appeared in identical costumes.

Pieces were often introduced by audio or visual segments such as snippets from documentaries or readings from poems, which helped make the political subject clear and present, but one of the many strengths of the program was its sustained sense of interiority, contemplativeness, even quiet mystery. Foster’s moving solo work “Flowers for the 13th” which began the program’s second half, started with all the dancers onstage, as if an ensemble number were about to begin, but its first movement was a mass exit, leaving dancer Akeem Edwards to dance alone on stage to cellist Emmanuel Losa’s plaintive onstage performance of “Amazing Grace.”

David Norwood’s movement to a recording of performance poet Marshall Davis Jones’ “Spelling Father” blended elements of dance and performance art to create a moving personal reflection on fatherhood and absent fathers. “Love is a Crime?” a work as sensual as the Sade track that provided the soundtrack, dramatized a love triangle, but it was most memorable for the quietly meditative, enigmatic mood captured by lead dancer Tavi Ellison.

In a country that has historically abused, imprisoned and commodified the black male body, the simple act of dance can itself become a political act, as resonant and powerful as a raised fist. The fist was, in fact, a gesture that fittingly ended the show: Foster’s ensemble work “Gesture” opened with video of African American athletes Tommie Smith and John Carlos’ famous political demonstration during the 1968 Olympic Games. The work translated that sense of defiance and resistance from a single gesture of stillness into gorgeous, multifaceted, fast-moving percussive ensemble movement. Clearly, like any meaningful political gesture, this one was deeply personal.