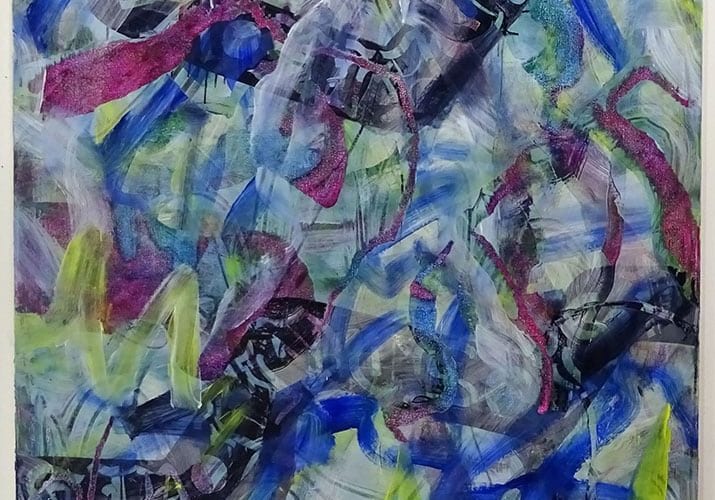 Modernism is ripe with many sub-movements and -isms. One of its many binaries dates back to the antiquity: the tension between the classicizing Mediterranean tradition and the Gothic pathos. This polarity may be mapped onto Vaclavik’s bright and airy paintings and Carroll’s dense, expressive compositions.

Vaclavik’s use of crisper edges reveals a slight departure from her earlier work, which exploited the softness of watercolor and other aqueous media. The saturated colors in Neon Waves conjures humid Floridian coastal life — teeming and lush. Salt Spray evokes both Matisse’s early, breezy arcadian pictures and, more directly, his later, simpler collage work. Vaclavik’s irregular forms and use of ample white space translate Matisse’s cutouts into more complex, fragmented forms; yet she maintains a comfortable joie de vivre that harks back to the French Fauvist painter.

Carroll draws from the lineage Abstract Expressionism. Fact-Based Lies (2017) is the largest and most commanding work of Carroll’s nonobjective works. Though gesturally applied, paint is controlled and rhythmic — more Krasner than Pollock. Carroll uses wax and acrylic, building up patterns of pigment in translucent layers of gray, ultramarine blue, neon lime and fuchsia. Threaded throughout is a band of calligraphic pattern reminiscent of Germanic blackletter typeface. Not quite legible, it draws attention to the formal elegance of letterform. Carroll’s other works, a numbered sequence of Stained Glass Window, also utilize bands of text-like imagery. Carroll’s titles and jewel-tone palette suggests windows of Medieval cathedrals, portals through which light enters a space while obscuring the outside world. Carroll emulates these windows by modulating translucency; paint ranges from sparse patches through which white canvas show through to thick, pasty swaths of opaque color. In his statement, he describes an emotive and philosophical impetus to painting. While he doesn’t deal literally with the big subjects that compel him (the existence of God and validity of art and love), he perhaps successfully conveys a sensation that underlies such questions.

Reminiscent of painters like James Rosenquist — especially his post-Pop canvases that combine representational and abstract modes and the landscape of Florida’s lush Gulf Coast — Ben Steele’s Impossible Objects are nevertheless fresh takes on abstraction. Though working on a diminutive scale as compared to Rosenquist’s monumental compositions, Steele draws on rigorous observations of the real world to create fragmented images that waver between recognizable form and nonobjective abstraction. Steele begins by setting up a still life on top of which he projects images in light from which he extrapolates. The result is a distorted abstraction in which fragments and silhouettes of recognizable form appear. Leafy trees and spidery palmettos make for complex patterns. His architectonic structures are invented, visually interesting forms. Like Vaclavik, Steele’s works evoke summer light.

Altogether, the formal acumen of the artists of ABSTRACTS makes for pleasing painting. It’s a show that will please fellow painters given the artists’ intuitive command of their chosen media and their various strategies of abstraction.