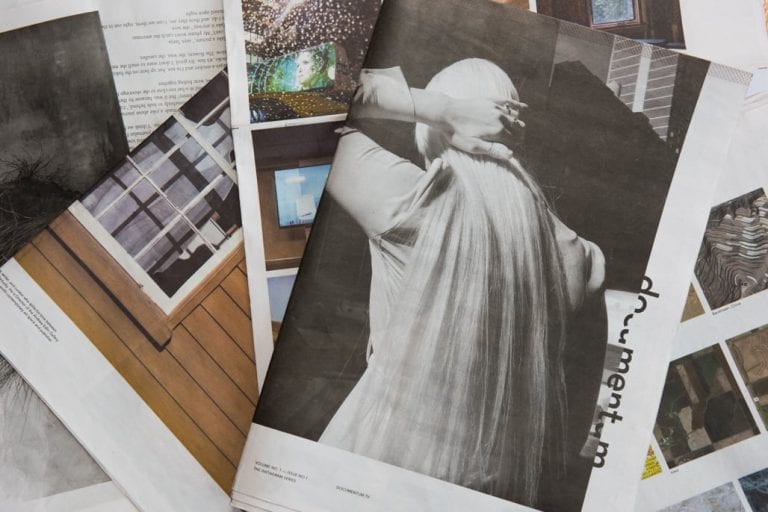 Review: {Poem 88}’s “Documentum” brings a digital medium back to its analog roots

”What, exactly, does it mean to call something a photograph? Is a photograph something you hold in your hand or that gets laminated onto a mug or the top of a birthday cake? […] Is a photograph a collection of ones and zeroes stored on a hard drive or in a digital cloud…?”

In his seminal book Photography Changes Everything, curator and writer Marvin Heiferman reflects on photography as an “agent of change” and encourages readers to think about the “protean nature” of the medium. Documentum, the photography exhibit currently on view at {Poem 88} through March 26, would be a suitable place to start this conversation.

The show presents a selection of images taken from the first issue of the eponymous quarterly published by Fall Line Press, the brainchild of William Boling. Robin Bernat, founder of {Poem 88}, partnered with Boling to feature frameless photographs on one side of the gallery as well as the full display of the newspaper, pinned down on another wall, like a collection of dead butterflies.

The ambition of the periodical Documentum is to regularly publish contemporary photography in relation to the “cultural ephemera of its time.” For its first volume, Boling and color photography master Stephen Shore collaborated to produce the Instagram Series, which showcases the work of 27 photographers through a selection of their Instagram feeds. Boling, Shore and photographer/designer Dawn Kim acted as founding editors and used the help of Chris Rhodes and David Campany to guest curate this edition. Each of them selected five photographers (or Instagrammers in this case) from the U.S., Europe and Japan.

The tangible result is an oversized periodical that feels like a good old-fashioned newspaper, smells like one and even leaves you with dirty hands if you hold it for some time. “I like the fact that it is a dying medium,” says Boling, who acknowledges his enjoyment of going against the grain. “I like its topology, how it flips, how it flops. I like the soft, gently analog feel of the newspaper.”

The paper is indeed cumbersomely folded and, once you flip it through, nearly impossible to reassemble — but what newspaper isn’t? Yet, the paper’s minimalist design, well-rendered colors and eclectic content have an inherent beauty, despite the cumbersome nature of its medium.

When introducing themselves, most featured photographers speak about the freedom conducive of the medium to express themselves. “I often work with no premeditated plans — I regard my Instagram photographs as mirrors or windows that reflect or let me see through my own feelings, emotional tendencies and visual aesthetics,” comments Japanese photographer Yu Ukai.

The British photographer George Miles, on the other end, writes, “I use Instagram to challenge my own conventions about making and viewing photographs, and to indulge in my love of the overlooked.” For Stephen Shore, the sense of community is key. “There is a group of people whose posts I always anticipate seeing; and, who I know are looking at my posts.” There is no need to argue that, within its short five-year history, the social platform has found a core of adopters among its 400 million users.

Instagram Series brings a digital medium back to its analog roots, causing viewers to pause and reflect on the fast-paced evolution of our various communication platforms. However, if the paper is really not your “thing,” you can always follow the project on Instagram, under the handle @documentum.tv.