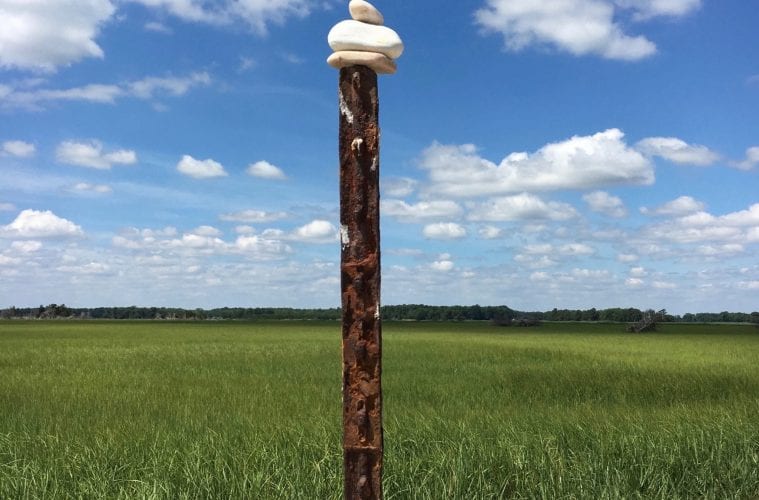 Review: Poem 88’s “Correspondences” series brings us back to balance

I love the conceit of Poem 88’s summer series Correspondences, a series of short exhibitions inspired by the Swedish scientist, theologian and philosopher Emanuel Swedenborg (1668–1772). But you don’t have to understand the mystic thinker’s ideas in order to get it. Correspondences references the notion that instances of good mitigate bad in order to restore balance.

Correspondences began Saturday, June 17, with the reception for Art Vandenberg’s Steles, photographs and sculptures made to celebrate and honor the natural world. Using found, simple materials, Vandenberg erected simple, temporary monuments while taking walks along the shore for this body of the work. Most of the show consists of photography in the form of 13- to 15-inch acrylic-mounted digital archival prints, though there are a few sculptures made of found boards, sticks, canvas, rope and other materials, too.

The photographs rely on the artist’s subtle arrangement of found objects that he encounters on walks. Shorn of its former marker, a rusty road sign post augmented by three carefully balanced stones is the subject of Stele – 3 Stone (2017). The stacked rocks recall Andy Goldsworthy’s manipulations of nature, but Vandenberg’s work seems neither derivative nor unnecessary. It’s significant that Vandenberg not only uses the physical components of the environment but also human-made objects, too. Simple but effective, Steles pictures a partially darkened plank upright in the sand against a cloudless blue sky. Notwithstanding its beachy appeal, it is eerily monolithic. Kubrick’s quintessential monolith comes to mind, as do its many associations with technology, humanity and history. Despite the connections of the show to Swedenborg (and by extension the often technophobic romantics and transcendentalists he inspired), Vandenberg’s work takes a slightly different slant. Vandenberg studied both art and information and computer science at the advanced level, earning master’s degrees from Georgia State University and Georgia Tech. Perhaps his ideology reflects his dual backgrounds. Vandenberg ascribes to transhumanism, which advocates an anti-essentialist embrace of technology. Simply put, technology is a good thing that can improve human lives. Thus, Vandenberg’s choice of camera — the one on his phone — is perfect. Not only does it embrace new media, it has an egalitarian undertone: to me it suggests that snapping photos of a sunset or even a guilty-pleasure selfie does not really interfere with the authenticity of a moment but rather commemorates it.

Vandenberg’s #Tipis are on long-term display in the adjacent Floataway Community Center, offering a further correspondence and deeper insight into his practice. Inspired by the catalog for the Met show The Plains Indians: Artists of the Earth and Sky, the symbology is intricately developed, reminiscent of ancient pictographs. The #Tipis stand for key moments for the artist. #WalkaboutTipi, for example, represents the pivotal year in Vandenberg’s life when he transitioned back to art-making after a career in information technology. However, I find the #Tipis less effective than the simpler Steles photographs. Further, despite genuine respect for the artist’s developed system of personal iconography, I find them potentially problematic due to the appropriation of Native American culture.

The reception for Steles also included a “cleansing” performance by Karen Tauches and Stephen Fenton. The experimental augmentation of snippets of news broadcasts by Fenton was accompanied by bell sounds by Tauches. Ultimately, these events and exhibitions are more than pleasing sounds and pretty pictures of nature; they are optimistic calls to action.