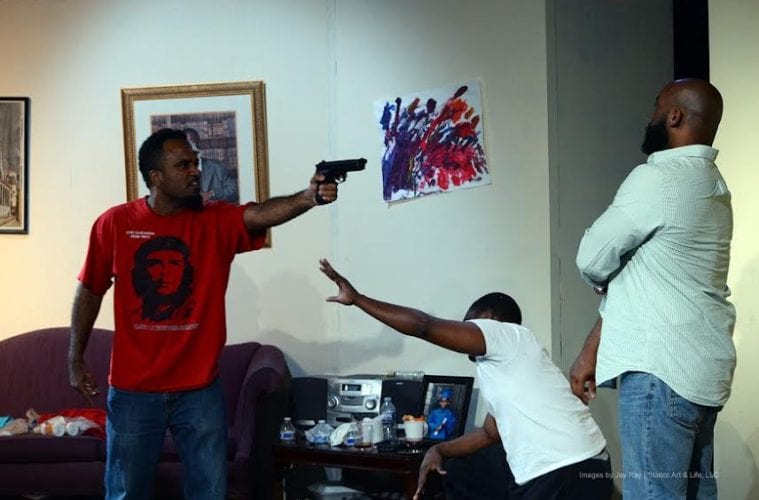 In the opening scene of Brothers of Affliction, the two eldest Owens brothers enter supporting the third, badly beaten and semiconscious, in their arms.

Shane (Carlus Houston) and Chris (Kerwin Thompson) have come together to pull the baby of the family, Tariq (Anthony S. Goolsby), out of a dangerous situation, but we soon learn that it’s questionable which of the brothers is actually in most desperate need of an intervention.

The three have no choice but to wait out the difficult night together at Chris’ apartment; Tariq is badly injured, and Shane is now hiding out from the police. As the night progresses, we learn all about the brothers’ various afflictions, their difficult pasts and all the things that, for better or worse, bind them together.

Among the many appealing aspects of the play is the way that even the most troubled interactions have touches of humor in them, and the light moments of playful banter are shaded by more turbulent emotions. One of the play’s funniest and most touching scenes has Shane and Chris tossing a football as Tyriq makes elaborate gestures to show them that he’s wide open and ready to receive the ball.

The two oldest, the ball-throwers, share bonds and memories that Tyriq, as the youngest, doesn’t have in common with them. By nature, they ignore him both in their conversation and in their game. It’s a situation that’s hilariously (and painfully) familiar to anyone with older siblings.

The cast is totally believable, and the actors understand the complicated nooks and crannies of the brothers’ lives and relationships: the petty jealousies, the anger, resentments and also the abiding love. There’s not an emotion, whether on the surface or buried beneath years of suppression, that the actors don’t make crystal clear.

Though the focus is tight and the cast small, Crayton keeps interest high through his simple but inventive developments. The urgent situation at the opening may be boisterous and dramatic, but we begin to really get to know and feel for the brothers as things slow down and other, quieter moods emerge.

But it occasionally seems the play has too many dramatic revelations about the problems the brothers face. I don’t doubt that life can be plagued by so many challenges (life is like that), but the fact that so many of the problems had previously been hidden and are only now being brought into the open in a single night could seem overly dramatic (plays are like that, I suppose).

And unfortunately, the ending is full of narrative ambiguity, which doesn’t fit because the main strength of the play is in its specificity, directness and intimacy.

The dramatic, penultimate scene has two characters holding guns. There’s a blackout and the sound of gunfire, but when the lights come up for the resolution, a post-funeral scene some days later, it’s never made entirely clear in the dialogue who on stage fired the gun or if the shooter (we learn early in the play that there are threats waiting for the brothers outside) had arrived at the door.

My mind even wandered to the possibility that we had jumped forward in time, and that the deceased had died from the alcoholism or cancer that had been the subject of earlier discussion. These crucial narrative questions were never answered satisfactorily.

Also left unanswered: In the penultimate scene, Shane reveals to Tariq the way their father died years ago. It’s devastatingly troubling news, and we see Tariq react in the moment. But in the last scene, we don’t learn how Tariq has processed or dealt with the traumatic new information.

Still, in spite of its unsatisfactory ending, Brothers is a powerful and moving piece of theater, and we’re lucky to have Crayton and his Rising Sage company in Atlanta. The troupe is now rounding out its second season and preparing for its third with a production of Crayton’s next play, Bungalow, at the Porter Sanford III Performing Arts Center in early 2016.