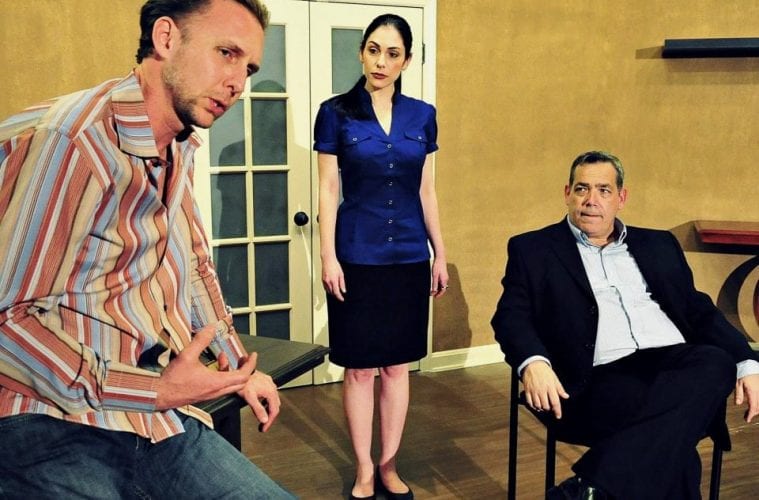 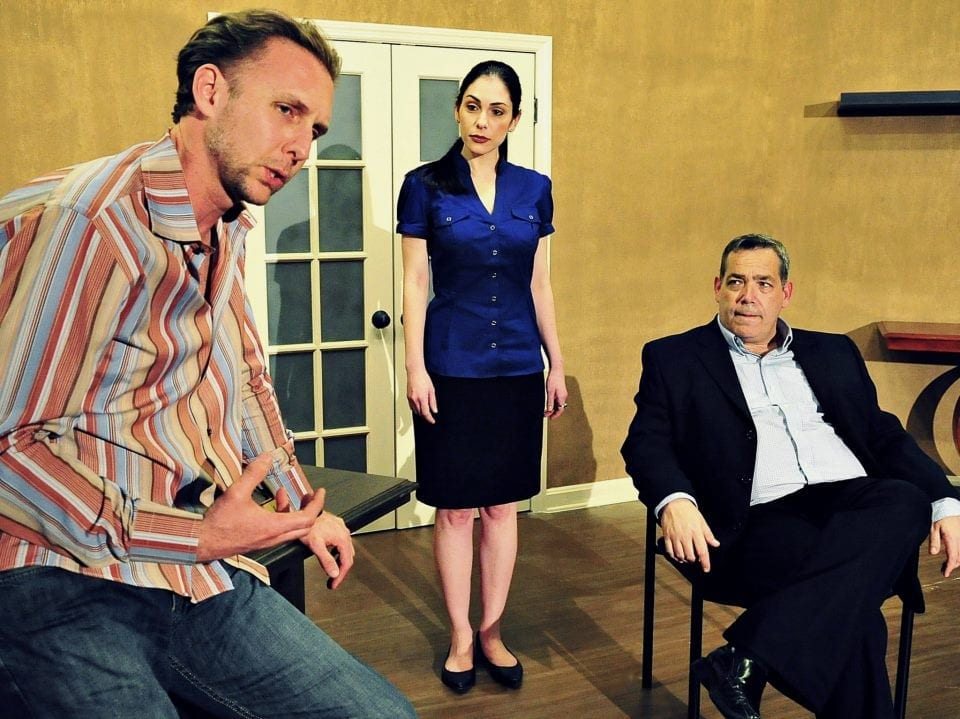 A satire on Hollywood, “Speed-the-Plow” takes place mostly in the office of Bobby Gould (Jayson Smith), who has recently been promoted to head of production for a major movie studio. One morning in his new office, colleague Charlie Fox (Robert Mello) uncorks some great news: a name actor likes a script Charlie sent him a while back and wants to make a film of it. Loyal to Bobby, Charlie wants to keep it within the studio.

They eagerly go about setting up a meeting with the studio head. While they high-five and wait for Karen (Jackie Costello), who’s filling in for the regular secretary, to bring in some coffee, they joke about whether Charlie can bed the temp. Bobby later explains the process of greenlighting films to Karen, citing a book he has on his desk, which he is doing a courtesy read of with little chance of its being made into a movie. Looking to win his bet, he asks Karen to read it and come to his place that night with a report.

She does, seeming to know in advance that he wants to sleep with her. But she makes a case for the project. Far out of the loop of Hollywood mores, she actually has a conscience, and wonders why putting bodies into seats is always more important to studio heads than crafting socially relevant fare.

The next morning, after their night together, Bobby seems a changed man. Much to the chagrin of Charlie, who had his hopes pinned on another project, Bobby decides to fight for the underdog one.

“Speed-the-Plow,” which debuted in 1988, is still timely with its digs at the movie industry. It’s also cynical and funny, with some occasionally profane one-liners. A 20th-anniversary Broadway revival starred Raul Esparza and Jeremy Piven — for a few weeks, anyway, until Piven’s infamous mercury-poisoning incident and subsequent withdrawal. He was replaced by William H. Macy, and Macy and the Tony Award-nominated Esparza became a dynamic pairing.  (The original version starred Joe Mantegna, Ron Silver — who won a Tony for the role — and Madonna. Yes, that Madonna.)

But if “Speed-the-Plow” demonstrates Mamet’s wit and feeling for dialogue, it also demonstrates how tough it’s been for him to write female characters. Most of his plays have been male-driven, with women as accessories. (His “Boston Marriage,” a full decade after “Speed-the-Plow,” contains some of his most strongly penned women.) The role of Karen is underwritten, coming across more as a plot device than a fleshed-out person. Costello is talented and has reliable timing, but the character isn’t nearly on a par with the other two. Even on Broadway, Elizabeth Moss (of television’s “Mad Men”) had trouble bringing Karen to life, especially on the same stage with Macy and Esparza. In Mamet’s tale, it’s not entirely convincing that Bobby would change his tune so quickly because of one night with Karen, especially with his etched-in-stone mentality. And one character’s turn against her seems rather misogynistic. “Speed-the-Plow” is nevertheless worth seeing, for its jabs at Hollywood, its punchy pace and Mello’s and Smith’s performances.

Pinch ‘n’ Ouch is a scrappy young theatrical company that over the last few seasons has staged the likes of Neil Labute and Kenneth Lonergan and carved out a niche for edgy fare. Bobby Gould’s Hollywood probably would not approve.