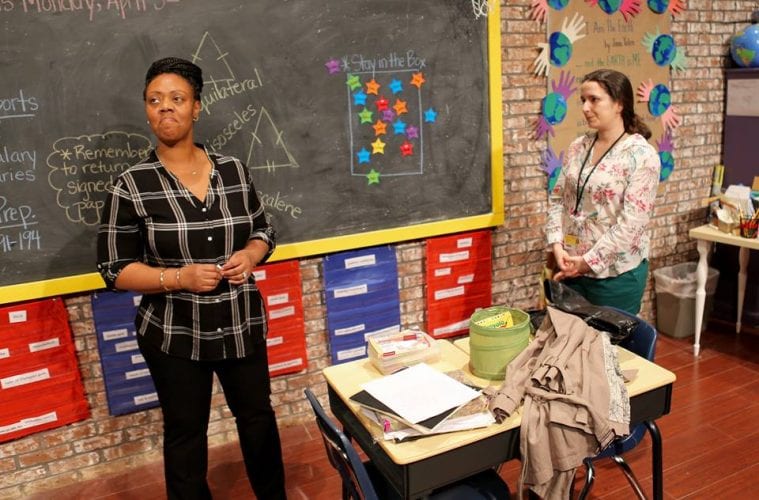 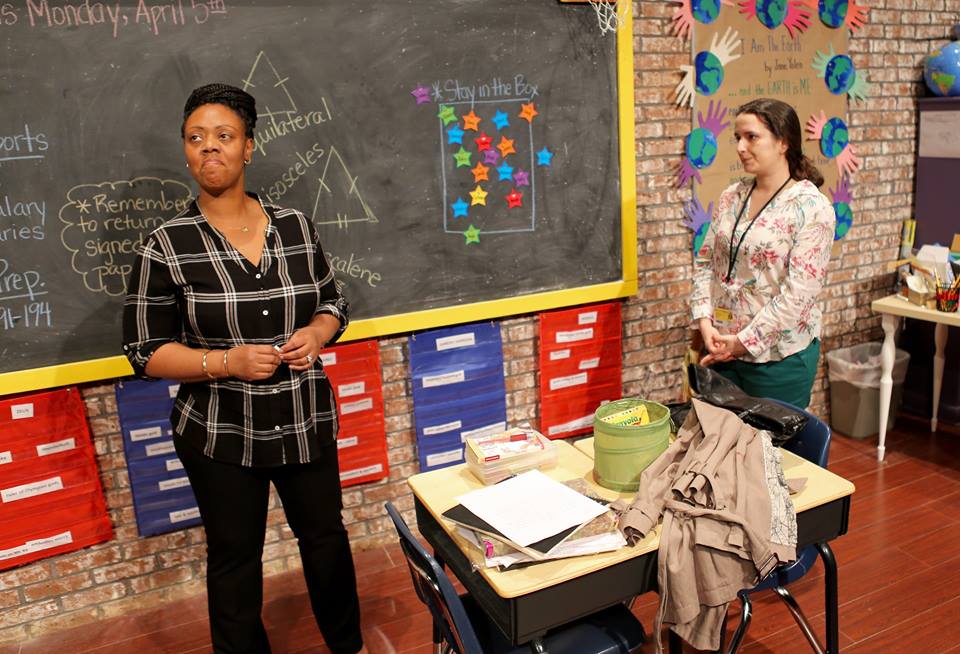 Monique Grant (left) and Vanessa Aranegui as the parent and teacher in a conference that forms the play. (Photo by Grant McGowen)

When things aren’t going well at school, parent/teacher conferences can get pretty tense. But even so, few of them probably compare to the nail-biting, antagonistic, disturbing one we witness in the new play Gidion’s Knot by Johnna Adams, currently having its regional premiere at Pinch ’n’ Ouch Theatre through March 24.

In the taut and smartly enacted two-woman show, fifth-grade teacher Heather (Vanessa Aranegui) is surprised in her classroom by a visit from parent Corryn (Monique Grant). Heather doesn’t have any meetings scheduled as far as she knows, so it takes her (and us) a disconcerting moment to figure out what this visit is about.

Corryn, it turns out, is the mother of Gidion, a troubled and possibly bullied student in Heather’s class, a student who has recently committed suicide. Now the grieving and angry mother has arrived to confront the teacher and to find some answers as to what went on. The pair slowly unpack a set of complicated relationships, as they variously place, accept, deny and shift the blame for the tragic situation.

The play is intense and dramatic to say the least, and both actresses do a fine job of both ratcheting up the tension without sending the action into the territory of tawdry melodrama where it could easily end up. Director Hillary Heath wisely opts for a subdued and quiet approach, though the mood is sometimes too subdued. Once we’re in this realm and realize we’re in hands we can trust, a little more emotiveness, considering the situation, wouldn’t be entirely out of order. If anything, this crew errs on the side of caution.

Designer Laura Meyers’ classroom set with its thumb-tacked book reports and laminated stars and project poster boards is very convincing (the program notes that she’s a former teacher) but it’s also eye-poppingly elaborate, too much so for such a small space: there’s more in this classroom than can be possibly taken in.

Still, Pinch ‘n’ Ouch gives the show a fine production; it can crackle along at the pace of a good thriller. But the script is ultimately dissatisfying. We learn a lot about Corryn and Heather — and ultimately Gidion and his classmates, as well — but there’s only so far their speculation (and their blame-placing) can go.

The women, though they disagree about the meaning of what’s happened, seem to come to a consensus about the actual events themselves. This was perplexing since so much is indeterminable, and especially the possibility of sexual abuse between off-stage characters, which is floated at one point, would not so easily be resolved or put out of mind without further investigation. They both seem to agree that it didn’t happen, though how they satisfactorily arrive at this conclusion when they can agree on so little else is puzzling.

And even with all that aside, there is only so far that the dramatic and imaginative situation can go since it is just the two women in the classroom. In the play, there are no shifts in time or location, and no new characters enter. It’s a great strategy for making a tight, quick, intense drama but, ultimately, it starts to feel too small to encompass the big issues the play wants to bring in.

And even more problematically, Gidion starts to seem too much like an authorial, fictional creation, and not a real kid. His homework assignment — an impossibly mature and insightful, if disturbing, short story — is read by Heather at one point. He writes like no fifth grader ever.

We’re also too conscious that this narrow focus on two characters and the topical subject are part of a contemporary playwright’s clear recipe for multiple productions, rather than an author truly testing the limits of her dramatic imagination. By the end, all that’s left is for Corryn to place the blame on Heather or not. We’re interested, but not hugely moved or fascinated, because we’re certain that the destination would be either one or the other right from the start.