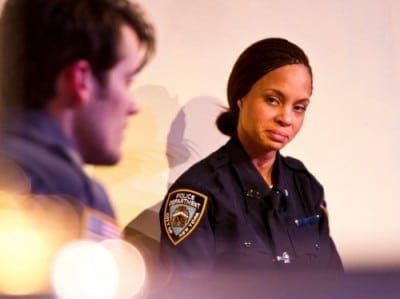 These are the characters of “Lobby Hero,” and many of Lonergan’s other works, such as “This Is Our Youth” and the Oscar-nominated “You Can Count on Me.” In fact, you can match the DNA in the apartment-complex security guard Jeff of “Lobby Hero” to the protagonists of those other two works. 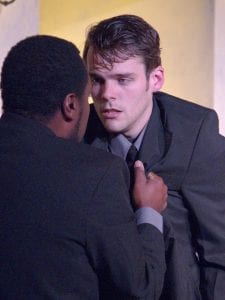 Jeff (Andrew Puckett) has taken the graveyard shift after getting kicked out of the Navy — doing a poor job of following in his father’s footsteps — and he’s hoping to save enough money to move out of his brother’s house, get his own place, and then … what? He’s not really sure. He’s challenged by his boss, the by-the-book William (Enoch King), to better himself, and Jeff seems to give little more than lip service to the notion. Then police officers Bill and Dawn enter the scene just as William learns that his brother may be connected to a murder investigation, and Jeff’s life may never be the same. Or will it?

That we know these people is just one of the charms of Lonergan’s work, which receives a worthy if uneven treatment in Pinch n’ Ouch Theatre’s second-ever production. The show opened this weekend at the 14th Street Playhouse, and company co-founder Grant McGowen deserves credit for tackling such rich and subtle material.

Lonergan’s comedy-drama is no easy chore, because once you meet these two “couples” and start to get into their rhythms, a murder investigation forces them to change partners on you and new dynamics unfold to the point that you’re not sure who’s influencing whom. It’s all revealed in Lonergan’s rapid-fire dialogues and monologues, and on opening night it was clear that the cast hadn’t quite grasped the script’s nuances.

It isn’t for lack of effort. Puckett is initially endearing and ultimately unnerving as the hapless Jeff. He jokes to cover his insecurities, but his sarcasm is infectious. He gets easy laughs when he challenges his superior William with lines like, “Isn’t it stupid that you’re the ‘captain’ when there are no other ranks?” He’s like a gangly version of Mark Ruffalo, Lonergan’s go-to slacker, with his loping gait and uncertain thoughts. 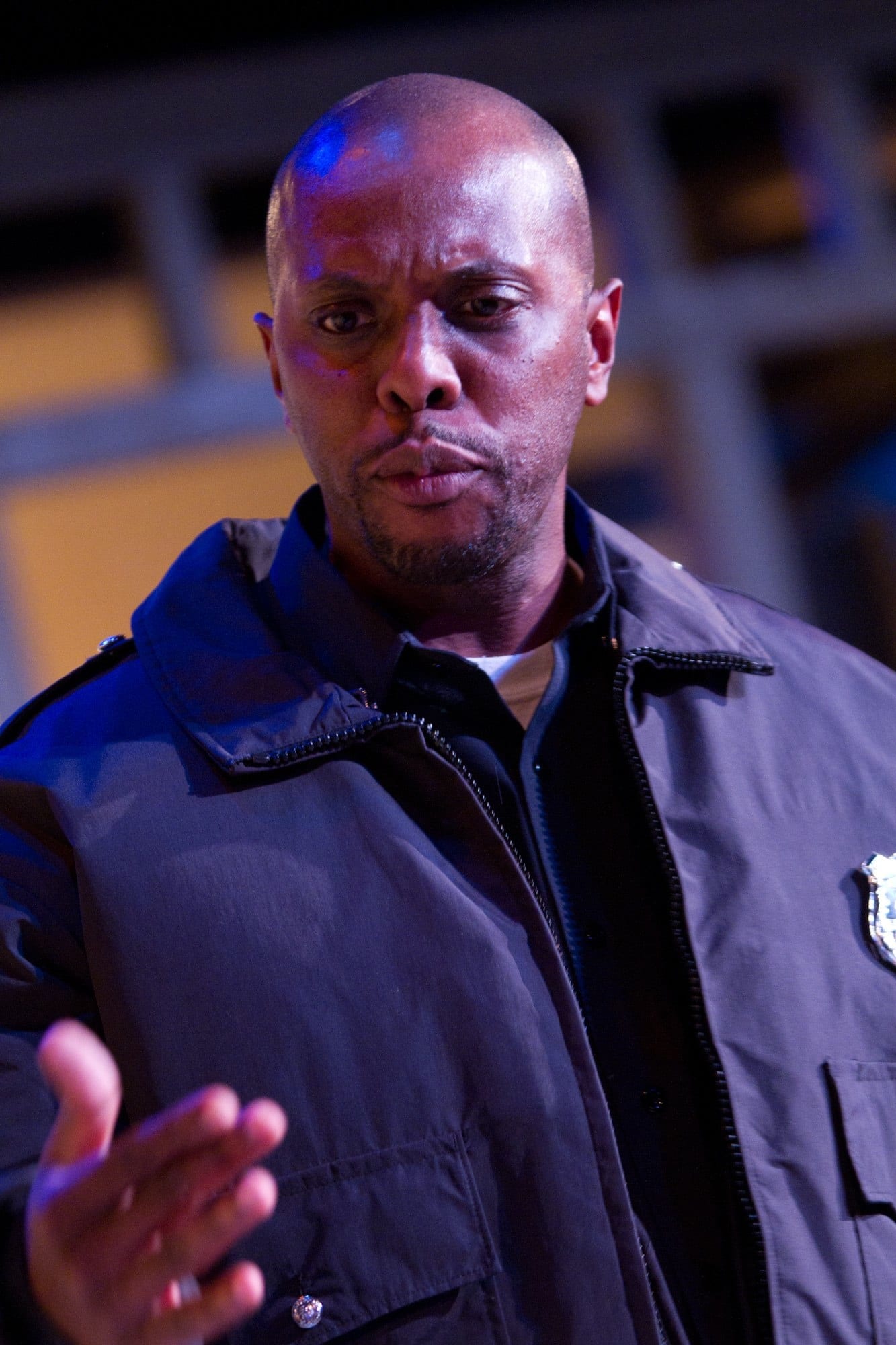 Despite their early struggles, the comic chemistry between Puckett and King clearly thrilled the crowd in a way that reminded me of Trazana Beverley and Andrea Frye’s comedy routine going on nearby at the Alliance Theatre’s mounting of “The Nacirema Society.” Both duos could take their act on the road.

While Jeff is at the heart of “Lobby Hero,” the other three characters command attention, thanks in part to the increasingly conflicting relationships. Rookie cop Dawn (Portia Cue) realizes that the romantic entreaties (and spotless reputation) of her veteran partner Bill (Larry Jr., at left) might not be as pure as they seem, just as Jeff’s crush on her might not be so silly as she thinks.

Even Jeff, who rightly sees Bill as a rival, envies him; he wishes he could be so sure of himself.

King’s William wants to be more in control of his modest life than he is, and struggles with a moral code challenged by his brother’s implication in a grisly murder. King’s struggles with his lines almost work in his character’s favor. Larry Jr.’s crooked-cop Bill threatens to dominate his scenes, sometimes in a bad way, but when he focuses his anger at Jeff, the whole audience takes note. 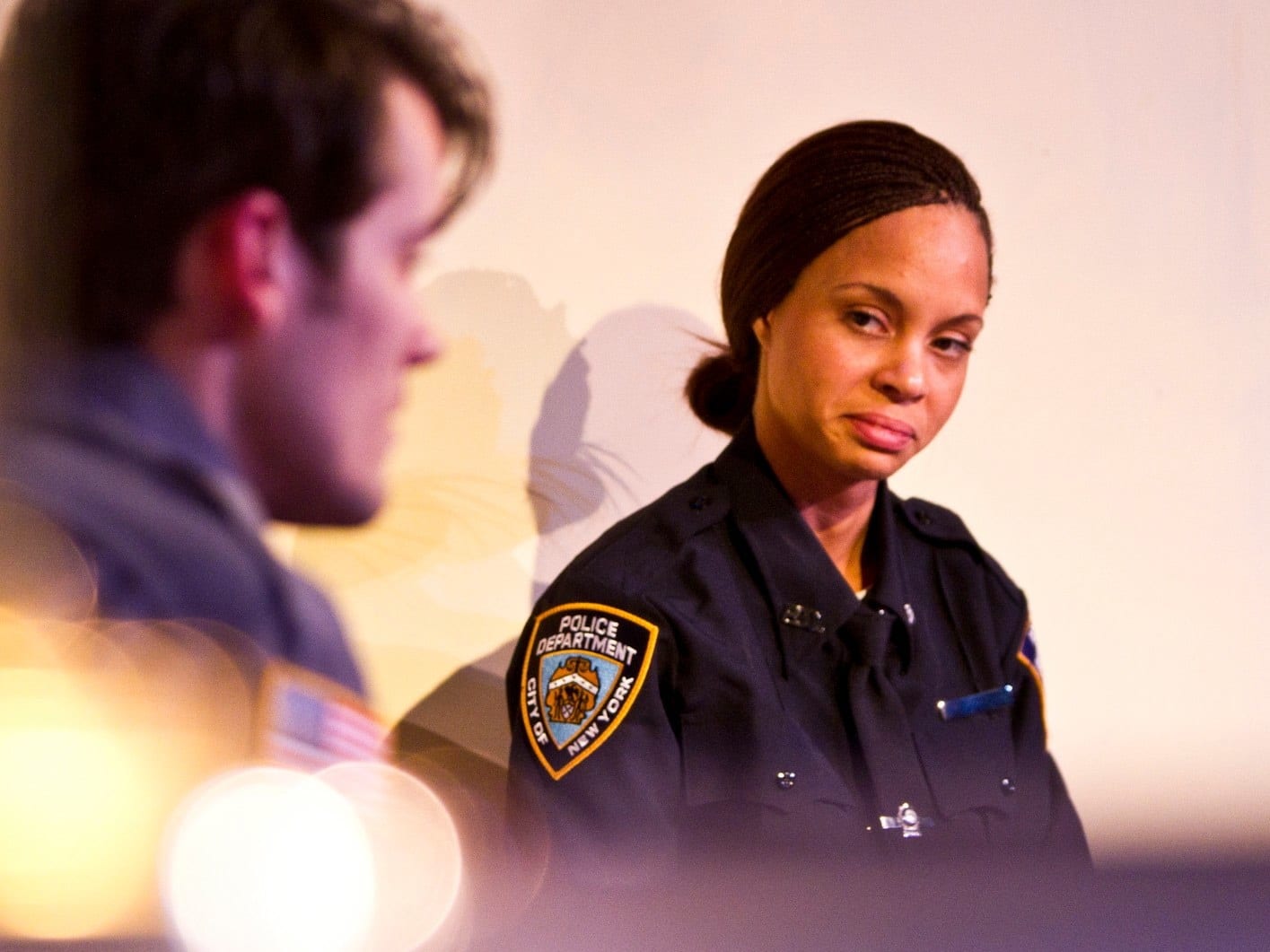 As Dawn, Cue (above) relies too often on easy physical ticks — hand waves, eye rolls, the occasional “harrumph” — though she ultimately shows Dawn just as trapped as the other characters. She’s just trying to do the right thing, and as Lonergan often shows, that’s easier said than done.

While the apartment-lobby setting doesn’t require much, the show’s design doesn’t exactly try to rise to the occasion. It’s all a study in lifeless beige, with a few sconces and a chandelier thrown in for dressing. Preston Goodson’s sound designs are little more than the obligatory passing subway train. Mitch Marcus’ lighting felt uneven; too often lights dimmed for no apparent reason, although he makes up for it with the show’s elliptical ending.

McGowen debuted Pinch n’ Ouch earlier this year with a mounting of Neil LaBute’s “Reasons to Be Pretty.” Now “Lobby Hero” underscores his fondness for the latest generation of American playwrights. When McGowen can get his cast to more fully realize his idol Sanford Meisner’s insistence that actors “live truthfully under imaginary circumstances,” this company will know it’s doing the right thing.