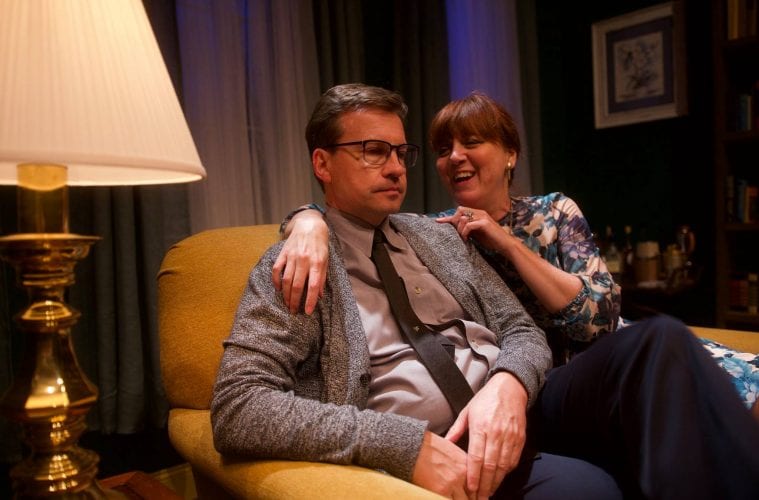 Care for a nightcap?

The offer might sound tempting, but if the invitation ever comes from the likes of George and Martha, you should probably think twice. Nick and Honey accept, of course, setting off the intense and devastating chain of events depicted in Edward Albee’s 1962 classic Who’s Afraid of Virginia Woolf? The great play (many people, including myself, consider it the greatest of the 20th century) is getting a decent, if faulted production at Pinch ‘n’ Ouch Theatre through September 29.

One of the problems in producing Albee’s great play is that it was adapted into an unforgettable film. Elizabeth Taylor hit the peak of her estimable career playing Martha in 1966 (a role entirely against type; she was still a Hollywood glamor icon in her early 30s at the time). But Richard Burton exceeds her, ascending bodily into the stratosphere as George. One wonders how an actor could mold himself into a role so thoroughly; he hardly seems to be acting at all. He becomes a transparent window into the soul of an invented person.

It’s not an easy play to begin with, and contemporary actors must tread in the shadow of those glowing celluloid images whenever they step onto the stage in Woolf. Although things don’t get off to a promising start, the Pinch ‘n’ Ouch production does eventually find its groove with Jeffrey Charles Morgan as George, Jennifer R. Lee as Martha, Lucas Scott as Nick and Michelle Pokopac as Honey.

Grant McGowen’s simple, elegant set is one of the best and most fitting that Pinch ‘n’ Ouch has created for a show. Woolf is set in a claustrophobic living room, so Pinch ‘n’ Ouch’s  small, converted loft space with its sharply rising arena-like seats is perfection. But strangely, early action comes across as awkward and stagey. In the opening scenes, actors don’t seem to be convincingly in that convincing New England living room. Lines that should resonate or linger often just pass by as something someone said. Characters often seem to sit when they should stand, or vice-versa. Most of the sparring in Woolf is verbal, but there is some crucial physical action, and the various fights, shoves, stumbles and falls all have a stagey, preordained quality, which has the effect of diminishing any mounting tension.

Still, the production improves as civility deteriorates. There are only four characters in Woolf, and although viewers often remember the play as a sort of nonstop brawl between George and Martha, there are actually all sorts of interesting moods and permutations along the way.

Albee captures a number of tones, and many of these — such as the quiet moment when George first interrogates Nick to size him up, or a late-play speech in which Martha explains how George is actually the love of her life — are conveyed beautifully. Albee’s play is naturalistic, but it has occasional strands of absurdism and surrealism; the natural laws of the universe are never broken, but the action is so intense, so raw and strange and devolving that the possibility often seems vaguely imminent. This is a quality, a central strength of the play, that actually emerges more vividly and frighteningly in live theater than in the film, and it’s also where the Pinch ‘n’ Ouch production excels.

In Lee’s performance, Martha’s abiding love for George seems to become apparent early on, in spite of her ongoing cruelty (Nick’s surprise at her confession was itself surprising; the audience is way ahead of him). Unlike Burton, who was at his best when the character is at his most philosophical and forbearing, Morgan’s strength in the role comes when he rises to meet Martha with a cruelty of his own.

Woolf is a love story about a couple who make the difficult choice to live with the truth rather than in the more comforting dark of illusion, and this, in spite of any bumps along the way, ultimately comes across powerfully at Pinch ‘n’ Ouch. The play must have knocked audiences senseless when it opened way back in 1962, and it clearly still has the power to do so.

The current cast, which performs through September 1, is directed by Brian Ashton Smith. On September 6, the cast changes. Grant McGowen will direct Chip Powell as George, Emily Reily Russell as Martha, Alek President as Nick and Britt Douyon as Honey.