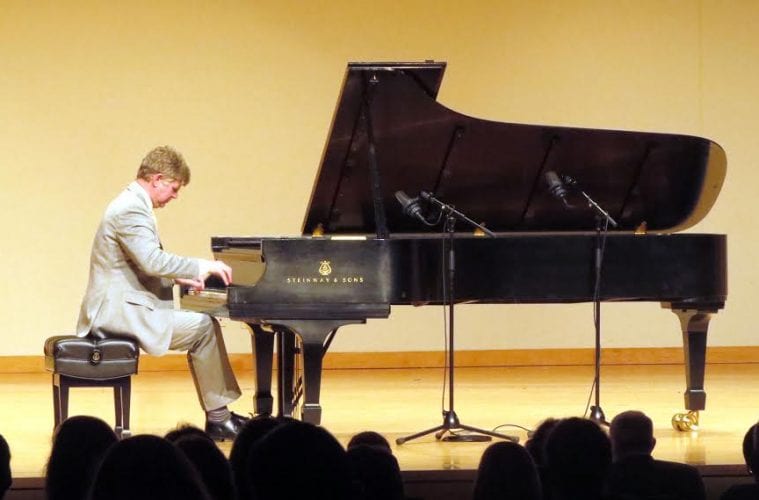 On Wednesday evening, pianist Ian Hobson performed a solo recital of music by Chopin, Rachmaninoff, and Kreisler at the Bailey Performance Center’s Morgan Hall on the campus of Kennesaw State University. The performance was also streamed live over the Internet.

Born in Wolverhampton, England, in 1952, Hobson made his American debut in 1986, and has since established himself in the concert circuit as a pianist with a comprehensive range from Baroque to contemporary with a strong emphasis in Romantic repertoire. He is currently the Swanlund Professor of Piano at the University of Illinois Urbana-Champaign.

Hobson’s major recital project of this season is a series of six solo recitals in New York City entitled “Downtown/Uptown,” which focuses on preludes, etudes and variations by 19th and early 20th-century composers. The recitals also include an occasional modern work composed for him using those forms, thrown in for good measure.

The first performance of the series took place on October 13 at SubCulture, a music-and-arts basement club in Greenwich Village. Wednesday’s program at KSU was nearly identical to that performance. The exception was the replacement of a new work by Stephen Taylor — which received its world premiere that night in New York — by two of Rachmaninoff’s transcriptions of music by Fritz Kreisler.

All three études are relatively restrained in terms of technical challenge compared to Chopin’s other, better known études. Hobson’s performance, clear and balanced, nevertheless set the stage for the more virtuosic dozen of Chopin’s Opus 25 Études which followed. Hobson offered up a solid reading of the latter, powerful and colorful, with an astute mastery of multiple voices enhanced by a judicious use of pedal rather than a wash from its over-use.

Hobson is one of those pianists who plays close to the keyboard. There are few hand and arm gestures that rise high above keys and none which seem for purely visual effect. He attended to the finger-work and the detail of the music. The Études do often easily inspire pianists to display moments of flamboyance, but Hobson’s performance concentrated on the music rather than flash.

After intermission, Hobson turned to Rachmaninoff’s set of ten Preludes, Op. 23, each in a different key. It’s not clear whether Rachmaninoff intended to eventually write preludes for each of the 24 major and minor keys, in the manner of the preludes and fugues of J.S. Bach’s two “Well-Tempered Clavier” books.

He had written only one prelude, his popular Prelude in C-sharp minor, before composing the Op. 23 group. He did eventually achieve a cycle of 24  preludes in 24 keys with the addition of the 13 Preludes, Op. 32, even if he didn’t originally have that goal in mind.

Rachmaninoff never performed all of the Op. 23 preludes in one concert, nor did he record them all. But the logic of the key relationships in the sequence are undeniably one of unified structure, and Hobson’s approach to the music reflected that, while at the same time allowing each prelude to voice its own individual character.

Fritz Kreisler originally wrote his three “Old Viennese Dance Melodies” (“Alt-Wiener Tanzweisen”) for violin and piano, which he used as encores. He first published them in 1905. They became immensely popular and in 1911, Kreisler published his own arrangements of them for solo piano.

Two of them, “Liebesleid” (“Love’s Sorrow”) and “Liebesfreud” (“Love’s Joy”), were also transcribed for solo piano by Rachmaninoff — who was a friend of Kreisler — in a more virtuosic manner for his own performance use as pianist. He also recorded both. Hobson played both of these Rachmaninoff transcriptions to close the concert proper. He then returned to the stage to play two more of Chopin’s Études as encores — Nos. 3 and 4 from the composer’s Opus 10 set.