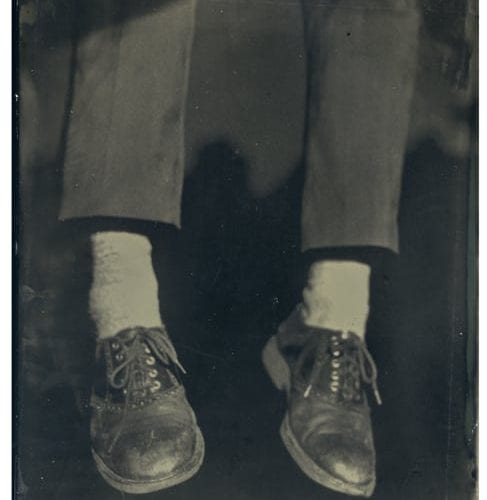 Review: Photographers Stephanie Dowda and Tommy Nease explore place in unexpected ways, at Get This A sense of place takes root at Get This gallery with shared solo exhibitions by photographers Stephanie Dowda and Tommy Nease, on view through May 10.

Topophilia, Dowda’s series of dreamy silver gelatin prints, takes its name and inspiration from the work of Yi-Fu Tuan, the venerated Chinese American philosopher and geographer who explored the nexus of geography and art and stressed the importance of place in human perception.

Dowda makes poetry of the landscape. Her black-and-white midsize photographs have an elegiac, remembered quality that skirts nostalgia. They maintain their anonymity with titles that give away nothing of the specifics of a particular place. At least one was taken in the American Southwest that Yi-Fu Tuan himself loved. In Sense of Awakening, Dowda renders a portrait of emptiness with her blurred photograph of a simple and seemingly abandoned cabin on an otherwise empty plane of land. I was pleased to learn that it was taken at the Lightning Field, Walter de Maria’s mystical installation of 400 lightning rods in the high desert of New Mexico.

Though particulars of location may be of interest to us, they are not the point of these photographs, which deliver place through the lens of emotion. Dowda’s photographs possess the ineffable sense that emanates from a profound relationship with the natural world and is shared by so much art and literature of the American South. To my mind, that sense comes from an affinity with the land and a tendency to endow it with human emotion, especially our own.

Yi-Fu Tuan proposed that topophilia, or love of place, comes from the one-way bond humans create after developing links to a particular place. According to the gallery, Dowda aims to explore “the powerful sensations humans experience from our natural environments.” Yi-Fu Tuan’s ideas faltered for me here. My experience of Dowda’s work was much less about my own perception of the landscape than the independent, animate quality inherent in the land that Dowda captured on film.

Does a metaphorical experience of the work — this is like that — speak to my own conception of an animate landscape? Does it illustrate the idea of Yi-Fu Tuan’s humanist geography — that humans create place by being there — or does it reveal something intrinsic in the land? In other words, am I seeing because I am conferring my own emotion or am I seeing because something is actually there? Engagement with the work raises such questions. (Sense) Of Whisper illustrates this metaphorical quality. In it, bare trees lean in concert as if they are listening for something — or whispering to something somewhere through the clouds that enshroud them. I was reminded of Robert Penn Warren’s Trying to Tell You Something, in which the poet/narrator observes,  “All things lean at you, and some are/trying to tell you something.” I side with the poet.

Dowda’s silver gelatin prints have the loose, ephemeral quality of graphite drawings. Fourteen of them fill the larger of the gallery’s two rooms. I felt a watchfulness emanating from the photographs as I stood in the center. Though a photograph is a fixed moment in time, I almost felt as if my presence had stilled time and movement, both of which would resume as soon as I left the room. Clouds would continue to roll across the sky. Barely perceptible light would again sparkle across the water, and shadows would deepen on the land as the sun arced across the sky. But not until I was no longer looking.

Despite the seeming autonomy of the photographs, in Surrounding Presence, tiny pricks of light caused by sand in the photographer’s camera serendipitously evoke lightning bugs in a summer field while reminding us of human intervention. The female form in Sense of Revenant is the only direct allusion to human presence in the series. This inchoate vision reinforces the dreamlike quality of all the work. As with a dream, these photographs seem to dissolve as you approach them, just as a dream does just after you wake. The sense of it lingers, but the details evaporate. This is work better seen from a distance.

The 13 small photographs in Tommy Nease’s nevermore series, his second with the gallery, draw you in and hold you there. There are secrets here to be revealed under close inspection and patient observation. Nease exhibits these photographs as tintypes in an attempt to “portray a sense of lost time in an archaic form of image making.” The tintype fell out of favor in the late 19th century, and many of his images look as if they were taken that long ago and left behind to be found decades later in a dusty box at a flea market. Though Nease stages many of the scenes, the tintypes nevertheless have a found quality to them. Nease was born in North Carolina and has spent time in Georgia and Virginia. An abiding sense of the legends and stories of Appalachia comes through in his work. All his photographs are untitled, leaving us to raise our own questions and supply our own narratives. Just who is that man seemingly hanging from somewhere above the frame of the picture, shown only from the knees down in old pants, white socks and dusty oxfords as the landscape darkens behind him? Did he take his own life, and why? Who is the woman in another photograph standing alone in a field facing the camera from a distance? She seems to look back through time itself straight out of a Reynolds Price novel as, scarecrow-like, she bisects the darkness of the field that fills the bottom half of the picture and the tired, white sky that fills the other behind her.

A more abstract image resembles a look down into — or back out of — an ice-fishing hole, but proves to be a view the photographer made in the catacombs in Paris. He was able to look up (through a drainpipe) into the light of day, capturing a view that the catacombs’ original inhabitants never could. This light-filled photograph rhymes perfectly with one in Dowda’s series. The circular darkness of Darkness Seeping In is the inverse of Nease’s bright white light. A half-remembered, haunted quality pervades in nevermore.  In one photograph, a fragile sun rises over a sea of endlessly receding Blue Ridge Mountains, yesterday or a hundred years ago. Either way, this sunrise seems to herald a day that no one wanted to see arrive.

Nease’s trademark humor is here as well. One image portrays what appears to be a frontal view of a dark gabled roof in the last minutes before nightfall, evoking the architectural portraits of Walker Evans or William Christenberry. (Spoiler: read this next sentence only if you don’t mind knowing what is really there.) This dramatic photograph is Nease’s own portrait of the former Pyramid Arena in Memphis, Tennessee, which has been converted to a Bass Pro Shops superstore.

Both Dowda and Nease successfully transfer the fixed moment of a photograph to the timelessness of memory, say, or a great Southern novel of the best kind. One with a strong sense of place.