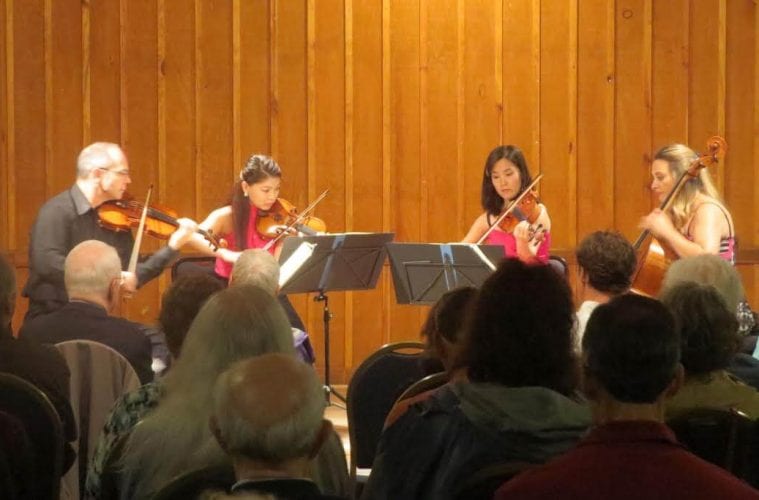 Review: Peachtree String Quartet kicks off the 2017–18 season with new ASO violinist on board

On Sunday afternoon at the Garden Hills Recreation Center, the Peachtree String Quartet performed a concert of music by Mozart, Rota and Mendelssohn to an audience that comfortably filled the venue, undeterred by the persistent gentle rain and coolish temperatures.

For this first concert of their new season, the most noticeable element was some adjustments to the quartet’s personnel. Artistic director Christopher Pulgram and cellist Charae Krueger were rejoined by returning violist Yang-Yoon Kim, who took a year-long sabbatical, during which fellow violist Yiyin Li filled in for her.

Most significant was the introduction of Sissi Yuqing Zhang, billed as “guest violinist” for this concert. Zhang is also a new member of the Atlanta Symphony Orchestra this season, in the first violin section, coming to Atlanta from graduate studies at Yale University and the Julliard School. Following her successful ASO audition, Zhang sat in with the orchestra in their final concert of last season in June, where Pulgram first made her acquaintance. Sunday’s concert marked Zhang’s formal Atlanta chamber music debut.

Word came to ArtsATL that, following the concert, a mutual agreement was cemented for Zhang to become a regular member of the quartet and play its two remaining concerts this season. In that capacity, Zhang replaces departing violinist John Meisner, a founding member of the quartet and valued contributor to the group’s development over its first five years — for which he has earned a well-deserved tip of the hat.

Sunday’s concert had an underlying “prodigies” theme, and indeed while each of the three composers were known prodigies whose talents emerged early in life, the works themselves were from a more mature phase in their creative life. Granted, both Mozart and Mendelssohn had relatively short lives, dying at ages 35 and 38 respectively, but of the works featured on Sunday’s program, none were juvenilia by any means.

The program opened with Mozart’s String Quartet No. 14 in G major (K. 387), nicknamed the “Spring” quartet, though the composer completed it on New Year’s Eve of 1782, the first of a set of six string quartets Mozart composed during his early years in Vienna. The quartet’s performance of this overall cheerful piece lent justification to the work’s “Spring” moniker, though the wet autumn weather was undeniably a contention. The high humidity, and the attendant chill inside the recreation center, is the kind of atmosphere that wreaks havoc on stringed instruments, but the group managed it well and the performance showed a palpably promising musical chemistry between the players that endured for the entire concert.

Giovanni “Nino” Rota (1911–1979) was an Italian composer best known for his film scores, among them Francis Ford Coppola’s first two Godfather movies, Franco Zeffirelli’s Romeo and Juliet, and films by Federico Fellini and Luchino Visconti. He won an Academy Award for Best Original Score for The Godfather Part II.

In addition, Rota also wrote a good number of works for concert and stage, including 10 operas and five ballets, plus a body of orchestral, choral and chamber works. Among them, composed in 1948 and revised in 1954, was Rota’s sole string quartet, which proved an attractive selection; its modernisms are not at all spiky, but still have fresh appeal. It’s a good piece for the group to keep in its back pocket for future concerts, perhaps paired with a quartet by a lyrically inclined American composer like Samuel Barber or Ned Rorem.

After intermission the concert closed with Felix Mendelssohn’s String Quartet No. 4 in E minor. Written in 1837 while he and his new wife Cécile were on their honeymoon, it was published as the second of a set of three string quartets that make up his Op. 44, although it was the first of them to be composed. In contrast to his first two string quartets, which were heavily influenced by Beethoven, it’s in these Op. 44 quartets that the composer’s own voice began to clearly emerge — beautifully crafted and unmistakably Mendelssohnian.

This particular quartet, No. 2 in the Op. 44 set, is the most dramatic of the three, with an underlying sense of urgency that rivals that of his final quartet, No. 6, composed a decade later. To some degree it also recalled the kind of energy underlying a Mozart quartet, rather than heavier Romantic-era fare. As such, it was likewise uplifting music to hear on a drooly but not entirely dreary afternoon.

All in all, the concert proved a satisfying start to the Peachtree String Quartet’s new season, foreshadowing more good things to come.