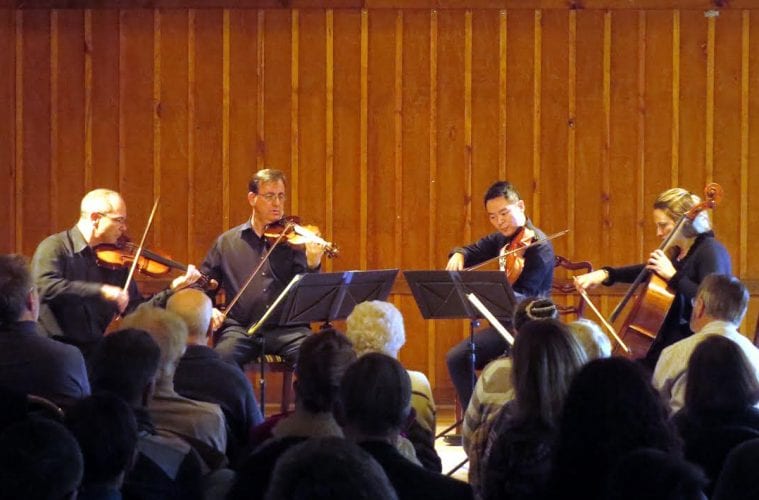 The fickle frosty finger of winter weather that descended on the metropolitan area Friday night caused various events and concerts to be canceled over the weekend, including a concert by the London Haydn Quartet at Spivey Hall (which has been rescheduled for this Wednesday, January 11) and Saturday evening’s performance by the Atlanta Symphony Orchestra at Symphony Hall.

Even so, through all the apocalyptic predictions of ice and snow grinding the city to a halt, artistic director Christopher Pulgram bet on Atlanta’s streets being clear and safe enough Sunday afternoon and did not cancel the quartet’s plans. He kept in touch with his core audience via email, assuring them the concert would take place and that despite the sub-freezing winter chill, “the recreation center will be warm and cozy inside.” His gamble paid off. The day, though chilly, was clear and sunny, access to the modest-sized venue was easy, and attendees were greeted with comfortably cordial ambiance indoors.

Most importantly, the music was likewise heartily comfortable. The program began (as it often does for the group) with a string quartet by Franz Joseph Haydn, in this case his String Quartet in E-flat Major, Op. 64, No. 6 (1790). It opened with a charming Allegro followed by a slow, lyrical second movement with a contrasting central section. The ensuing Minuet had the delicious rustic character of a country dance, while the speedy Finale offered up plenty of the composer’s signature clever twists and turns.

It was violinist John Meisner who first brought the ragtime music of American composer and pianist William Bolcom to the group’s attention. An avid historian, Meisner was visiting the Scott Joplin House State Historic Site in St. Louis, which preserves what was the residence of the ragtime composer from 1901 to 1903. Meisner got into a conversation with the curator, who offered to play a ragtime piece on the museum’s piano. It was one Meisner did not recognize, and turned out to be Bolcom’s “Graceful Ghost Rag.”

The Pulitzer- and Grammy-winning Bolcom (b. 1938) taught music at the University of Michigan at Ann Arbor for 35 years before retiring in 2008. Among his musical accomplishments as a pianist was taking part in the academic revival of American ragtime in the late 1960s and early 1970s, which by that time had nearly become a forgotten genre. Interest within academic circles grew over that time, particularly in the rags of Scott Joplin, but it was the 1973 film The Sting, starring Paul Newman and Robert Redford, that caused Joplin’s music to explode onto the American popular consciousness.

In the midst of this, Bolcom was also composing and performing his own numerous piano rags. Among them were the slow and sentimental “Graceful Ghost Rag” (1970) and the more upbeat “Inceneratorag.” Bolcom himself transcribed both for string quartet in 1989 as part of “Three Rags for String Quartet.” The Peachtree String Quartet delightfully played both of them to close the concert’s first half.

These versions are genuine transcriptions in that the music is re-voiced, and different elements emphasized, in contrast to the original piano rags, so as to better suit the string quartet. For one, the key of “Graceful Ghost” is changed from the piano-friendly B-flat minor to the brighter and more string-friendly B minor. But it is also surprising how much pizzicato Bolcom employed in the string quartet version. As someone who knows the piano rag well, that was somewhat unexpected.

Readers are encouraged to compare available recordings on the internet, but with a caveat: there exists a plethora of really bad, wrong-headed recordings of “Graceful Ghost” on YouTube, especially of the original piano version. The most credible piano performance to be found is Bolcom’s own, from his 1971 album Heliotrope Bouquet on Nonesuch Records.

After intermission, the concert concluded with a perennial favorite, the String Quartet No. 1 in D major, Opus 11, by Pyotr Ilyich Tchaikovsky (1871). Most affecting was the famous, slow second movement, marked Andante cantabile and played with the strings muted, featuring the Russian folk song “Sidel Vanya” (“Vanya sat on a sofa and smoked a pipe of tobacco”) as its principal tune. It was a warmly romantic way to end the afternoon.