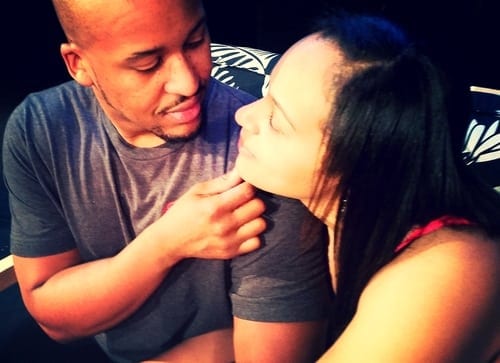 ArtsATL “30 under 30” playwright Paris Crayton III originally made his mark in Atlanta with hard-hitting dramas like Brothers of Affliction, The Best Game and Chainz/Broken, which featured heavy themes including family disfunction and gun violence.

It’s one of the reasons why his latest work, the breezy comedy Crazyanity, comes as such a surprise. The play, running at the West End Performing Arts Center through May 24, is a sweet and likable comedy that never takes itself, or its characters, too seriously. In spite of a few weak spots, it manages to evoke genuine laughs from beginning to end.

Crazyanity gives us the story of Samantha (Starlett Hill) and Paul (Kenneth Camp II) who, at the play’s opening, are moving in together into a new apartment after six years as a couple. Even from the opening moments, it’s clear that, although it’s a good match, there’s tension in their relationship, and not just about where to place the couch, but in their sensibilities. 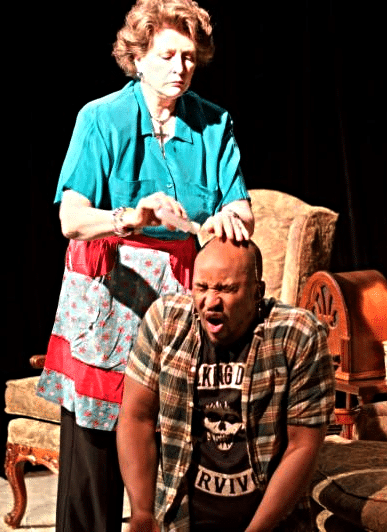 Paul is pragmatic and physical, while Samantha is romantic and idealistic. It’s a tension that gets amplified after they meet their new neighbor Eleanor (the delightfully ditzy Dianne Cusack Butler), a nutty Christian fundamentalist so devout she bakes Bible verses into her brownies and answers the doorbell with a chipper “This is a day that God has made.”

Eleanor has no qualms about delivering her judgement about the fact that Samantha and Paul are living together in sin: she refers to them as “shackers” with a deadpan matter-of-factness.

Although Eleanor is somewhat pesky, her presence begins to awaken Samantha’s desire for Paul to propose and even rekindles her interest in returning to regular church-going, both of which Paul finds impossible to deal with.

The humor can occasionally seem forced, as in a party scene in which the developments aim for madcap farcical chaos but fall short. Far better and funnier are the more believable scenes when we get more of the characters being themselves. In the end, it seems to take a little too long to arrive at a resolution for Paul and Samantha, and there’s something about that final resolve that seems too simple and easy.

Still, though it doesn’t make the broad or declarative statements of his earlier works, Crayton and his company have created a straight-forward, solidly paced and well-structured comedy that delivers on its promise of laughs, likable characters and a charming storyline.