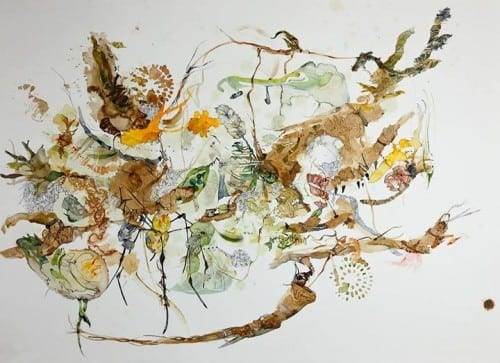 Pam Rogers uncovers the secret lives of flowers, herbs and other natural organisms in her small fictitious worlds. Her solo show, Terra Flora, on view at Swan Coach House Gallery through September 19, presents meticulously crafted mixed-media works that teeter on the edge between decorative and psychologically compulsive.

Rogers’ natural specimens spawn exquisite abstractions, spinning threads that both adorn and asphyxiate themselves and the world around them. Mimicking nature’s greatest irony, they are both impeccably beautiful while also tangled and twisted within themselves, inevitably caught in a magnificent demise.

The magic of Rogers’ work lies in the details. It is here that the artist indulges her impulses, where she is the least self-conscious and where the magic happens. One can easily roam and get lost amid her intricate line work, which blooms into elaborately entwined ecosystems. Unexpected representational elements appear within stirring abstractions: a pooling of natural pigment forms the edges of a leaf; a globular daub of yellow ochre becomes an emergent bulb buried in the soil; what looks like mitochondria or cascading rhizomes appear here and there.

Remnants, for example, is a wonderland of natural elements made of pigments from sandstone, local plants and geranium on mulberry paper.

But making these details add up to form larger dynamic compositions is an entirely different objective, and one that lags behind the successes of Rogers’ micro phenomena. Works like Rote Learning and Basic Skills, for example, feel awkwardly encumbered within the rectangular frame of the paper, and while Rogers’ natural pigments are lovely, they’re at times too indistinguishable from each other, forming a jumbled heap. While the chaos is obviously part of the aesthetic content, the larger compositional forms — how the details amass to form large shapes viewable from a distance — are less interesting.

Additionally, the allowance of negative (or blank) space works well in some, forming active shapes such as in Summer Solstice, for example, but the strategy can easily become an unquestioned formula that doesn’t necessarily work for each piece.

While the chock-full gallery walls yield themselves to the thematic organic overgrowth that permeates the exhibition, less successful works could have been pruned to emphasize Rogers’ strengths while still exhibiting a full show.

By contrast, Rogers’ smaller works on panel, exhibited in a salon-style constellation, negotiate this dilemma of edges more fluidly, some of them quite stunning.

Like cropped details of larger works, the scale of Rogers’ natural forms are more successful in smaller frames. They manage to balance divisions between positive and negative space in a more facile way, and the nonporous eggshell surface repels the watercolor and pigment, allowing for brighter colors and bewildering textural forms due to watercolor’s pooling.

But like her works on paper, Seeds walks a fine line between the psychologically penetrating and a more surface level ornamental aesthetic. One doesn’t know on which side of the fence they fall.

It’s impossible to disassociate certain cultural vernaculars from the work, namely a kind of American crafts-store aesthetic (e.g., the aforementioned potpourri), one that may very well be unintentional, but is nonetheless present. That some of the objects appear store-bought interjects a prefabricated one-dimensionality, and the intensity of such associations interferes with the ability to hear Rogers’ own individual artistic voice. This predicament weaves in and out of many of the artist’s works on paper as well, especially the more definitively illustrative pieces, such as Book Arts, where high design stands as an impediment to a latent but more authentic voice buried underneath.

Terra Flora is evidence of a highly skilled and deep-thinking artist whose artistic depths, found in the details of her complex layered worlds, require excavation like the organic content of her work. If beauty is the objective of this exhibition, then Rogers has succeeded, but one wonders what else lies beneath.